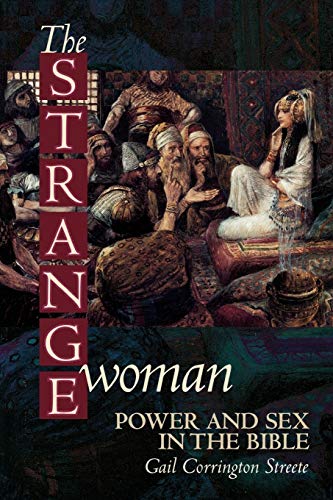 The Strange Woman: Power and Sex in the Bible

Streete began writing this book because of a perceived lack of feminist commentary on the adulterous woman. With this explicit feminist agenda in mind, Streete approaches the Bible in the manner of Schüssler Fiorenza, as a text which is androcentric, toxic and (I quote) ‘a waste dump’. Streete takes this as a given, relying, I assume, on others’ works to substantiate her view. She considers the Bible’s interpretation and its meaning to be the same and thereby merges a misogynist and sexist interpretation with the Bible itself, concluding that the Bible must be undeniably androcentric and misogynist. She interweaves biblical texts with extra-biblical ones (such as Jewish midrash and Christian commentary) and it is therefore at times impossible to see how Streete is interacting with the Bible because she doesn’t differentiate it from other texts in her ‘evidence’.

From this framework Streete focuses on the ‘strange woman’, or adulterous woman, and the relationship between adultery, idolatry and its gendering as female. Streete considers this fusion to be a male strategy to curtail female sexuality and to blame women for apostasy. The females Streete focuses on are those that fit with her hypothesis, and she ignores those that would challenge it. For example she ignores Deborah and Jael as women empowered but not categorised as adulterous, because they lived in a ‘confused time’. She also ignores Esther as she is supposedly a wholly apocryphal figure, which she is not. Her scholarly inadequate argumentation, exampled here, makes her overall analysis weak.

Arguing that marriage is a social construct, she wants to assimilate the biblical poles of the female gender (namely the wise woman and the adulterous woman of Proverbs) and take away the boundaries that constrict women’s identity. She wants to open up a space in which women can be free to be wise and adulterous if they desire.

Written from a view that considers the Bible to be simply a ‘paradigmatic meta-narrative’, this book approaches adultery and human relationships from a God-less point of view in which the primary principle is self-pleasure, empowerment and fulfilment. Streete is not presenting a theological understanding of the adulterous woman but a sociological one. She ignores the ethics of relationship and responsibility and focuses solely on the ‘marginalised’ woman and redresses the gender disbalance to an unhealthy extreme.

Streete outlines how the literary symbol of the female adulterer has tragic effects upon the imagination. She claims that (literally) violent condemnation of female adultery ‘sanctions and dictates the appropriate behaviour for those societies for which this literary code is a divine code’. Streete contends that ‘metaphors are never “simply” metaphors’. Not entering into a hermeneutic debate of any depth, Streete does not substantiate her assumptions. Although to some extent a historically viable claim (such passages have indeed been used to defend misogynist behaviour) it is not exhaustive and is malting unrealistic propositions about the power of a metaphorical trope upon ethical decision making. She also makes metaphor more authoritative than other elements of biblical writings on adultery, such as the more explicit moral teaching.

Throughout the book Streete looks at examples of the ‘strange woman’, and claims that the biblical portrayal of the adulterous woman exhibits a ‘diachronic consistency’. However, a paragraph earlier she sees the OT as making women responsible for adultery and idolatry but then cites the NT as shifting the responsibility to men. This is but one example of the way in which Streete not only contradicts herself, but subtly moves her boundaries and suppositions according to her current argument. Not only confusing, it makes it difficult to understand exactly what she is arguing for and against.

Much of this book is written on assumptions: that adultery and marriage are simply social constructs, that marriage’s sole purpose is to reduce female sexual freedom and that adultery is ‘a strategy of resistance’. She does not explicitly defend her views and does not enter into any debate with the biblical view of marriage or the view that marriage is about relationship and may serve the family rather than just the male.

Streete’s approach obviously shapes her entire argument. Throughout the book she struggles to juggle her postmodern precepts with her condemnation of misogyny. She is relativistic and yet contends that the Bible is a misogynist text—two precepts that don’t stand easily together. She is motivated by gender ethics and yet explicitly distances herself from ethical judgements: ‘I intend neither to endorse nor to condemn adultery in women’. This slant therefore results in an ethical analysis of gender that ignores wider ethical issues, which makes her conclusions questionable. In her understanding of the main theme of the Bible as being about control (namely ‘ethnic integrity, controlling female fertility … retaining lines of leadership and authorship within a fragile nomadic tribal structure’), she completely misses out the overarching theme of a loving relationship between God and his people and therefore the marriage and adultery, she analyses are devoid of relationship, love or the reality of the dynamics of human-human and God-human relationships.

Streete’s sociological insights are the most interesting aspects of the book. Christian responses to sexuality have been dubious historically, Augustine called it the ‘perversity of the will’, and misogyny has been common within Christian theology from the Church Fathers, through Medieval and Reformation theology and even, scarily, to the present day to some extent. Highlighting this problematic area in church and theology’s history presents a challenge to theologians today. These questions need to be personally answered. Why is Israel’s idolatry always figured in the language of female prostitution? Do we as readers unthinkingly adopt these images that unbalance the scriptural view of gender?

However, as a ‘feminist’ analysis of the Bible, as a woman, I was sadly disappointed by the way Streete, in order to strengthen her ammunition against sexist interpretations, merely exaggerated misogynist and sexist interpretations. As a woman who disregards the Bible as God’s word, Streete can make the Bible her enemy, but for Christian women, and men, who try to live by it, a more ingenious approach to these difficult texts is required.