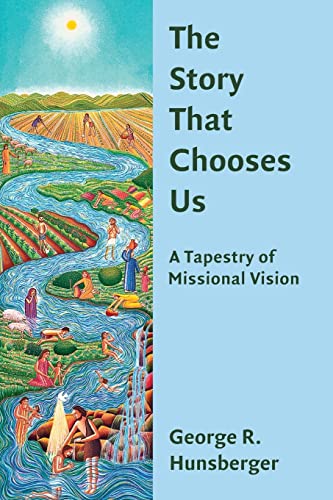 The Story that Chooses Us: A Tapestry of Missional Vision

“The Chinese character for crisis, we are told, is a combination of the characters for ‘danger’ and ‘opportunity’” (p. 118). Many missiologists would agree that the church is currently presented with both. It will have to decide how it will face those dangers and opportunities. Over the last several decades missiologist George Hunsberger has written many essays in order to help the church face this crisis of missional identity and practice. The Story that Chooses Us collects some of these. Covering topics like calling, community, and formation, these essays contain a number of reoccurring themes that weave cohesively into what Hunsberger calls “a tapestry of missional-ecclesial vision” (p. ix). The overall scope of this project is wide and the topics addressed are diverse, yet these reoccurring themes bring a sense of cohesion. Instead of addressing individual chapters in this review, I will cover some of these themes (the current crisis of the church, the current shape of the church, the identity of the church, the mission of the church) and offer some critical thoughts about this collection of essays.

The first theme we encounter concerns the current crisis the Western church is facing. Hunsberger says, “the crisis is that we have not thought carefully, critically, or theologically about our assumptions regarding the church and we have failed to notice how much they have been shaped by the character of modern American life” (p. 31). Modern American life is characterized by the privatization of faith, the postmodern condition, and a post-Christendom environment, according to Hunsberger. These current trends and other contextual factors have played a large role in the church’s understanding of its role in society. According to Hunsberger, “we have come to view the church as ‘a vendor of religious services and goods’” (p. 35). This “vendor-shaped church” is a problem because Scripture never speaks about the church in this way. In light of this misunderstanding about the nature of the church, we are faced with a question, “How shall we make a shift towards a more biblical identity?” Hunsberger’s answer is that we will have to return to the gospel. Reorienting ourselves around the gospel will aid the church in recovering its identity. By centering on the gospel of the kingdom the church will be able to live its identity as a community, servant, and messenger. The church will find that by living out its gospel-shaped identity it will begin to fulfill its mission to represent the reign of God. Hunsberger understands the word “represent” in two ways, both actively and passively. In its passive sense it means that the church is a sign or foretaste of the reign of God. In its active sense it means that it is an agent or instrument. It is quite clear how much of Hunsberger’s thought is indebted to Lesslie Newbigin’s missiology. Much like Newbigin, Hunsberger’s work endeavors to help the Western church see the issues it is facing and better embody its missionary character as a sign, foretaste, and instrument of the reign of God.

There is much to be appreciated about this collection of essays. First, we should appreciate the balance Hunsberger displays in his discussion of the mission of the church. The current missional conversation is dominated by language of “building” or “establishing” the reign of God. The reign of God is turned into a social project, which is often just a “baptized” version of whatever social projects are currently in vogue in society. Hunsberger avoids this and emphasizes the fact that while the church certainly is a servant to society it is also a messenger called to embody and speak the gospel, which will often critique culture. Hunsberger displays a nuanced understanding of culture, refusing to fall into the trap that many do, pitting gospel against culture assuming that the church neatly falls into the gospel side of the dialogue. Rather he emphasizes that there is a three-way dialogue involving the gospel, the church, and the culture that the church finds itself to be a part of. The reader will appreciate the fact that he grounds evangelism in gospel motivations. Evangelism is not simply an assignment, it is a part of our identity as people shaped by an encounter with Christ.

Despite these and other strengths, this book has its flaws. The most significant flaw is that Hunsberger creates a false dichotomy between the two notions that the church is a “place where things happen” and “a body of people sent on a mission” (p. 34). Also, much like other books in the missional conversation, this book almost completely ignores discussing the missional nature of suburban churches in favor of addressing mission in urban settings. This is a detriment because a good number of the readers of this book will likely not find themselves serving in urban settings.

Hunsberger concludes this collection of essays by describing the impact Newbigin has had on preachers. He describes how Newbigin’s work is a resource for those seeking to recover more biblical ways of believing, witnessing, and being community in our “post-everything” world. The same thing could be said of Hunsberger and his work. Hopefully this book will introduce many to the resource that is George Hunsberger’s work.