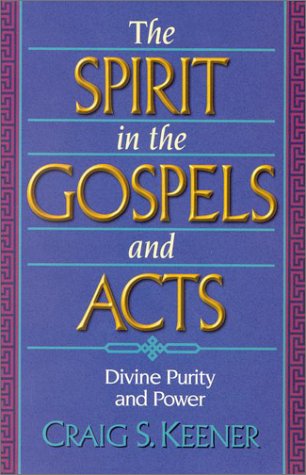 The Spirit in the Gospels and Acts

I have greatly enjoyed some of Craig Keener’s writings, and so accepted with alacrity the invitation to review this expanded rewrite of his 1991 Duke University doctoral thesis (on John). Essentially, his position is as follows:

(1) The Judaism out of which the NT sprang had two strands of pneumatology, which remained largely distinct: the ‘Spirit of prophecy’ and the purifying Spirit. The latter is attested to rather rarely, being found especially in the few texts reflecting Ezekiel 36:25–27 (Jubilees, parts of the Dead Sea Scrolls), though also in Testament of the Twelve Patriarchs. Virtually universal, however (including in other parts of the works just mentioned), was the view that the Spirit gave prophecy and revelatory wisdom/insight/knowledge. Rabbis thought this gift had ceased in Israel; other circles admitted the continuation of prophecy, but regarded it as rare. Virtually no parties any longer thought of the Spirit as empowering mighty works.

(2) Turning to Mark, 1:8–13 is above all paradigmatic for the pneumatology of the Gospel. Jesus’ Spirit-baptism (a pattern for that of believers) reveals the Spirit as the presence of the kingdom of God in (a) empowerment for mission (esp. witness; cf. 13:11), (b) the power of mighty works against Satan (1:12–13 provides the base for the exorcistic power of 3:28), and (c) the ability to participate in suffering and the cross (for the baptismal voice, interpreting the descent of the Spirit to Jesus, addresses him as the suffering servant). Mark thus combines the two strands within Judaism, the Spirit of prophecy and the Spirit of purification—and he adds the forgotten ‘Spirit of power’.

(3) Matthew extends the Markan emphases and also adds that the Spirit is paradigmatically the source of healing miracles of compassion, and the spread of justice to the Gentiles (12:18–21).

(4) John focuses on the Spirit above all as the cleansing power of new birth (i.e. mainly as the eschatological ‘water’ of the Spirit, in polemical antithesis to Jewish water rites; this in Jn. 3, 4, 7, 10 and 13), although he also develops the Jewish ‘Spirit of prophecy’ in his portrait of the Paraclete/ Advocate in the farewell discourses and in 20:22.

(5) Acts, by contrast, emphasizes the Spirit largely (but not exclusively) as a continually renewable donum superadditum of empowering for prophecy and proclamation.

There is much in the main ‘plot’ of this book to commend it, and a lot more in the fine detail. But this book also invites critical questions concerning its scope and argument.

Concerning scope, it seems an extraordinarily lumpy mattress: great detail on minor points of significance; too little on major areas (at the extreme, the Baptist’s ‘apparel and diet’ gets as much room as the whole of Luke’s Gospel—about a page). Given its title, we might have anticipated a far more even treatment of the witness of the evangelists. Luke-Acts, which represents a quarter of the whole NT and (as everyone admits) has a special interest in pneumatology, should surely have received more than a mere eleven pages of text (and those are largely devoted to the Pentecost account). And the important Spirit/Paraclete teaching in John 14–16 is only mentioned in a few (scattered) sentences. What makes this disparity the more incongruous is that almost half the pages of the work—and far more than half the words—are devoted to endnotes, often of relative inconsequence.

With respect to the fundamental argument, I would have to disagree with Keener. The strands in Judaism’s eschatological hope concerning the Spirit were not separate. For Judaism the one ‘Spirit of prophecy’ (rightly understood) could combine them (see my Power from on High, Sheffield Academic Press, 1996, chs. 3–5). For example, the Spirit resting on the variety of ‘messianic’ figures was quite widely understood by Judaism (reflecting on Is. 11:2–4) to be both the Spirit of wisdom and knowledge (= Spirit of prophecy), but—as that—simultaneously the Spirit who would promote the ‘fear of the Lord’. This latter is Keener’s ‘Spirit of purification’; so 1 Enoch 62:1–2 can even refer to this endowment as the ‘Spirit of righteousness’; the same was true in both messianic and non-messianic contexts at Qumran. In this quite widespread Jewish tradition, the same ‘Spirit of prophecy’ was also the Spirit of might/power to deliver from enemies. While I am not sure that Mark specifically relates the Spirit to ‘purification’ or the life of suffering (the baptismal voice refers to Is. 42, not Is. 53), Luke, John and Paul each present simple (albeit profoundly christological) developments of this multiple-stranded ‘Spirit of prophecy’ in Judaism’s hope, and they do so without bifurcating the gift into (e.g.) initial purification and later empowerment.

This book has plenty of good points to mull over, but overall I was a bit disappointed.