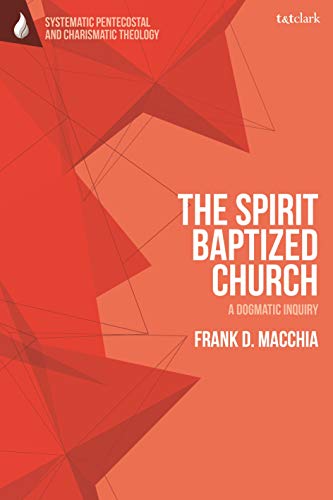 The Spirit-Baptized Church: A Dogmatic Inquiry

Written by Frank D. Macchia Reviewed By A. T. B. McGowan
Systematic Theology

In developing this new Pentecostal dogmatics, Macchia takes what he holds to be the distinctive element in all Pentecostal theology, namely, the baptism in the Holy Spirit, and works everything out from that core doctrine. Significantly, however, he offers a new twist on this doctrine. Most Pentecostals view the baptism in the Holy Spirit as a second (or third) experience, following regeneration. The majority see it as an experience of receiving the presence and power of the Holy Spirit for mission, ministry, and service. Those in the holiness/Nazarene tradition see it as a second blessing bringing holiness (or even complete sanctification). Macchia, however, wants to locate baptism in the Holy Spirit not only as an experiential event in the life of the believer but as a final event when the believer meets Christ on the last day. All earlier events of inauguration (new birth, union with Christ, water baptism, etc.) are to be understood only in the light of the final baptism in the Holy Spirit which is yet to come. This being the case, Macchia sees Pentecost as the key to any understanding of ecclesiology. He also has a strong emphasis on a relational ecclesiology and borrows significantly from Jürgen Moltmann, and Miroslav Volf, as well as Clark Pinnock and Thomas Weinandy.

In the first chapter he lays “the dogmatic foundation for the Spirit-baptized church in the self-giving of the Triune God” (p. 9). While placing all the emphasis on the actions of God, there is a significant discussion on the individual and the corporate nature of salvation. Each individual must come to Christ in faith for salvation, but the church is the social context in which God’s calling of an elect people takes place, by the Son, through the Spirit. The core message of the chapter is that the baptism in the Spirit is the means God uses to incorporate men and women into his own divine life and, thereby, into the fellowship of the church.

In the second chapter he deals with the “elect” church. He rejects the Reformed understanding of election as being an eternal decree, whereby some individuals are chosen for salvation “before the foundation of the world.” At the same time, he rejects the Arminian view, held by most Pentecostals, that God chose certain individuals “before the foundation of the world,” on the basis of having foreseen that they would freely choose Christ. Instead, he follows the doctrine of election in Karl Barth, whereby Christ is the “elect One” and human beings who are “in Christ” share in that election. Macchia is insistent that there is no such thing as an eternal decree. For example, he resists the “eternal decree” interpretation of Acts 13:48 (“all who were appointed for eternal life believed”) and of Ephesians 1:4 (“He chose us in him before the creation of the world”), choosing instead to follow Barth.

In the third chapter, he turns his attention to “the Pilgrim Church.” Here he opens up his theory that the Spirit-baptized church journeys from its beginnings through to the eschaton when that Spirit-baptism will be fully realized. Thus, there is a strong insistence that Spirit-baptism must be viewed eschatologically in helping to define the nature of the Spirit-filled church. Water baptism is described as “the ordination service of every Christian” (p. 116) and the church becomes the “temple of the Holy Spirit” (p. 117). Macchia also explores here what the “priesthood of all believers” means, avoiding the individualist interpretation and viewing it as an expression of the living life of the church in service to God and one another.

The second half of the chapter is devoted to a close examination of the “marks” of the church. His interpretation of unity, holiness, catholicity, and apostolicity is rooted in the early church but also pressed into service for his Pentecostal dogmatics. The section on the unity of the church also demonstrates that Macchia is an ecumenical theologian, well aware of the various ecumenical debates and dialogues. He quotes from many of the documents and agreements which have emerged from the movement and demonstrates how his own dogmatic work supports and builds upon these.

The final chapter, the “Witnessing Church,” draws the argument to a close. He concludes, “The church is the sign and instrument of Christ and of his kingdom in the world. The church is constituted by the means used by Christ to baptize others in the Spirit, to address others with the gospel and to incorporate them into communion and vocation The institutions of canon, proclamation, sacraments, spiritually gifted ministries, and mission are established by Christ and birthed in the Spirit to be used as the means by which the Triune God self-imparts to the world and draws the world into the divine embrace” (p. 210). Along the way, he quite rightly rejects the idea that the church is somehow an extension of the Incarnation (p. 166), and he affirms, with John Webster, that the Holy Spirit was at work not only in the initial giving of Scripture but in canon-formation and acceptance by the church. On the sacraments he highlights the significance of baptism as incorporation but rejects any notion of infant covenant baptism. He sees mission as core to the very being of a church.

This is a challenging and original book and well worth reading. If it has a weakness, it is that somewhat controversial doctrines (such as his understanding of the eschatological nature of the baptism in the Spirit and his embrace of the Barthian version of election), are not well supported exegetically. It may be, of course, that he has already provided more exegetical work in his earlier volumes which this reviewer has not seen. Pentecostals and non-Pentecostals alike will need to wrestle with his ideas, and this perhaps will lead to new ecumenical ground being broken.