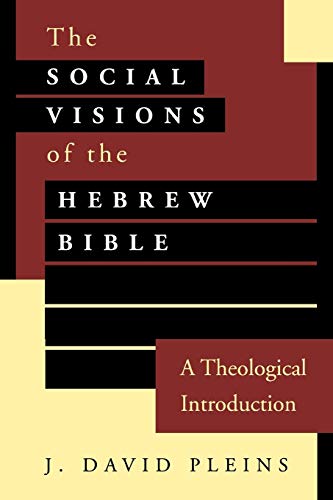 THE SOCIAL VISIONS OF THE HEBREW BIBLE: A THEOLOGICAL INTRODUCTION

Pliens’ book explores some of the various social justice questions raised in the Hebrew Bible. He examines the portraits of ‘the poor’ and ‘poverty’, ‘justice’ and ‘power’, ‘social ills’ and ‘social remedies’, and other related issues, as they are presented in the diverse genres of the OT. Throughout, Pliens utilises a reading strategy (set out in ch. 1) that uses archaeological, comparative Near Eastern, and social-scientific tools, alongside rhetorical, structuralist and post-structuralist analyses. This strategy is used to uncover both the societal institutions (the socioeconomic and political structures) and the social location of the actor presented in the text, as well as the social location of the editor(s) in the various stages of redactional activity. Pliens wants the reader ‘to hear the diverging voices of the biblical text as they speak to matters of social justice and poverty’ (29). Thus, his emphasis rests on the conflicting character of Israelite society reflected in the different ideologies that he perceives in the biblical text.

Pliens’ book is organised according to genre. He begins with the legal material (ch. 2), both in general, viewing the Decalogue (Exod. 20; Deut. 5) and the commandment lists (Exod. 34:10–28; Lev. 19:1–8) as ‘community ethic’, and in the specific ‘justice projects’ in the Exodus Covenant Code, the Deuteronomic Law and the Priestly legislation, as they deal with the issue of ‘poverty’ in particular. Here Pliens sees the diversity as a debate over how to remedy the structural ills of society.

The section on the ‘Grand Narratives’ or ‘historical literature’ analyses the social vision of the Deuteronomistic History, and the social ethics of the putative sources of the Torah (J, E, P). He also includes the books of Chronicles, conceived as a radical challenge to the views of power and ethics in Samuel-Kings (ch. 3). He devotes a whole chapter to Exodus (ch. 4), which he explores from the perspective of liberation theology. Chapter five tackles a broad range of books under the heading ‘Literature of the Persian and Hellenistic periods’, which he argues convey the changing shape of some of the social debates.

The section on ‘The Prophets’ (chs 6–9) builds upon W. Rauschenbusch’s work, and the ‘social gospel’ approach to prophetic social criticism. He devotes a chapter to Isaiah, Jeremiah, Ezekiel, and the Book of the Twelve, respectively. His section on ‘Poetry and Wisdom’ (chs 11–12) offers a ‘materialist’ reading of the Psalms (building upon the work of I Baudissin, Bruppacher, and Van der Ploeg) and also of Song of Songs and Lamentations (ch. 10). He then outlines the ‘ambivalence’ of Proverbs towards ‘poverty’ and the ‘poor’ (ch. 11), and finally surveys the social attitudes found in Job and Ecclesiastes (ch. 12).

We must praise Pliens for surveying, to a greater or lesser degree, the entire Hebrew Bible in his work. Nevertheless, his conclusion describes the diversity of the social ideologies as irreconcilable conflict. No doubt his particular view of the shape and date of the various sources and traditions moulds his views of the various social contexts behind the texts, and thus the nature of the social conflicts. His postmodern conclusion disappointingly leaves us up in the clouds. Nevertheless, whilst the evangelical reader may be unnerved by his conclusions, the discerning reader must strive to appropriate what is true to today’s social reality, and to bring the Bible’s ethical stances to bear on life right in the here and now.