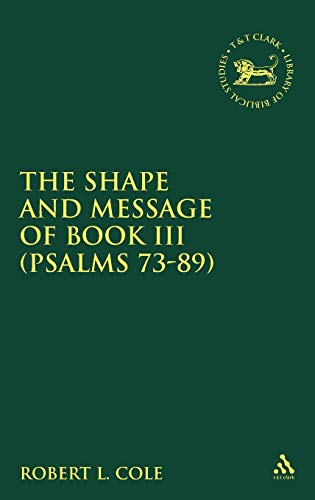 This published version of Cole’s doctoral thesis represents a ‘canonical’ approach to OT exegesis. Cole aims to demonstrate both that parallelismus membrorum is a feature of whole texts, and that Psalms 73–89 represent a continuing dialogue between Israel suffering in exile and God answering their laments. This dialogue is characterised by what Cole calls dis legomena, ‘twice-only occurrences of specific forms in a specified corpus of texts’. Cole’s work is not so much a new insight into the overall compilation of the psalter, already well represented by, e.g., G.H. Wilson and David Mitchell. It is more a detailed application of the theory to virtually every strophe of the psalms under investigation.

Thus Psalms 73 and 74 lament that the optimistic view of kingship presented in Psalm 72 has not been fulfilled, because of the fall of Jerusalem in 587 BC. Psalms 75 and 76 are a divine response to this complaint, affirming God’s eventual triumph. In Psalm 77 a pious individual (a Zion resident, the king perhaps?) reiterates his grief and faith, after which in Psalm 78 God explains why Israel had to be punished. Psalms 79–80 are pleas by the community for divine mercy. In Psalm 81 God tells them they had failed to keep his festival properly, and in Psalm 82 he condemns their leaders. Psalm 83 calls for judgement on the foreign oppressor nations, and Psalms 84–86 describe the life of the righteous (also the king?) culminating in residence in Zion, where Psalm 87 reports that even Gentiles will receive blessing. Psalm 88 revisits the laments of 73–74, but is now the voice of a Davidide in the depths of Sheol, to whom Psalm 89 tells of the eventual restoration of the Davidic covenant, even implying an immortal kingdom and an immortal king. This is not yet a reality (89 ends on a note of dismay), but Book IV (Pss. 90ff.) responds with a promise that in God’s good time (not reckoned as ours is) that kingdom will come.

Cole does not disallow the existence of earlier collections of psalms as building blocks of the present psalter.

But he pays too little attention to the question of who may have assembled Book III, when and why. The dialogue Cole envisages would presumably have been a feature of the pre-restoration theologies of the early sixth century, or of the monarchist tendencies later that century. But part of Cole’s evidence for his exegesis of Psalms 73–89 is their headings, which should almost certainly be dated much later. The heading of Psalm 86 (‘A prayer of David’) is particularly problematic, since Psalm 72 had already concluded that ‘the prayers of David son of Jesse are ended’. Cole has to translate the latter as ‘the prophecies of David [including all his utterances] are perfected’, and he comments that ‘what follows can only repeat what has already been said or plead for its institution’ (p. 139). It would have been good to see greater recognition of the disparate elements in these psalms, and of the later editorial work implied by their headings. (Goulder is quoted on the psalms of Korah, but not on those of Asaph.) A brief appendix considers several dis legomena, but a stronger case needs to be made for these to bear the weight of editorial theology ascribed to them.

The book is well presented, with few misprints, and written with a palpable conviction that the dawn of the messianic kingdom is adumbrated in the dialogue of Book III. Even if the case is overstated, this makes for an exciting and thought-provoking read.