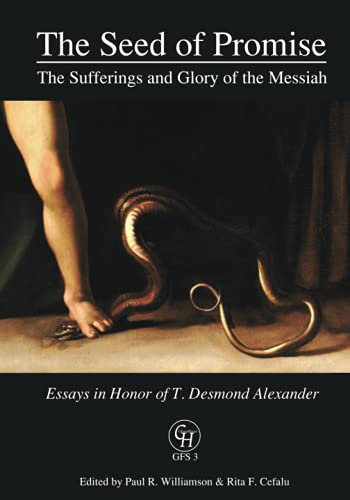 The Seed of Promise: The Sufferings and Glory of the Messiah: Essays in Honor of T. Desmond Alexander

The Seed of Promise is a treasure trove of gold nuggets for all diggers of biblical theology to mine. The volume consists of a series of essays written in celebration of T. D. Alexander’s 65th birthday and in recognition of his contribution to the scholarship of biblical theology. Included are seventeen essays by world-class scholars, many of whom were students of Alexander. These articles hone in on the specific theme of “the seed promise in Genesis 3:15” (the Protoevangelium) and “the suffering and glory of the Messiah” (p. xv).

The essays are distributed proportionally and in the order of the books of the Bible, with eleven essays covering the OT and six essays on the NT. Methodologically, the volume is diverse. Some look at texts philosophically or macro-structurally; others focus on analyzing a single figure or verse in the Bible. Several contributors also compare texts across several books. But common across the contributors is that they all recognize the presence of the seed promise of the Messiah in the text they worked on.

In the opening essay, James Hamilton traces the motif of “head crushing seed of the woman” across the Bible with fascinating insights. David Baker then discusses “Weal and Woe in Genesis,” and argues that economic blessing is rooted in a right relationship with the creator, and is not always predicated on ethical actions.

Four further essays track the book’s theme in the Historical Books. In an insightful chapter, Sarah Dalrymple tracks the development of two royal-messianic trajectories represented by two leading tribes, Judah and Ephraim, across the books of Joshua and Judges. She shows convincingly that Ephraim’s leadership becomes increasingly weak and the Judahite leadership is ultimately shown to be Yahweh’s choice by the end of the book of Judges. By looking at the genealogy in the book of Ruth, James McKeown argues that the line of messianic promise is not based on ethnicity as reflected in the Tamar and Ruth narratives (p. 89). J. Gary Millar examines how three kings, Solomon, Hezekiah, and Josiah, are significant for the reading of 1–2 Kings. While they are hailed as good kings, text snippets of their weakness point to the need for a king who is greater than all of them. Stephen Dempster focuses his attention on the last man of the Davidic dynasty in the last four verses of Kings (2 Kgs 25:27–30)—Jehoiachin, who is a foil to the true son of David, Jesus—“the last man [and] the first man of a new humanity” (p. 141).

In the only essay addressing the Psalms, Philip Johnston reviews some messianic psalms and reiterates the need to view these psalms through Jesus and to recontextualize them through the lens of the New Testament. Next, by tracing wisdom and creation motifs in the Wisdom Literature and various prophetic eschatological texts, Graeme Goldsworthy shows how the new creation is brought about by redemption through the suffering and exaltation of the Messiah.

This is followed by two essays on Isaiah that build on one another. J. Gordon McConville examines the rhetoric of Isaiah by its use of power language and imagery to generate a perception of truth (p. 188). Hearers, situated between a “war of words” with Yahweh on one side and the taunt of the nations on the other, ultimately need to recognize the messianic signs and decide whom to believe and trust. John Oswalt further emphasizes from the book of Isaiah that God’s promised messiah will not deliver through the powers of this world. In the final essay on the OT, Anthony Petterson traces the messianic kingship motif across the Book of the Twelve and sees a storyline of God’s judgment on Israel, followed by her exile and restoration. But hope remains for a future Messiah whose portrait is most clearly seen in Zechariah 9–14.

In the first of six essays on the New Testament, Dane Ortlund argues that the macrostructure of the Gospel of Mark identifies the glory of the Messiah in the first half and his suffering in the second half. Significantly, the transfiguration account in 9:1–13 functions as “a microcosm of Mark’s Gospel as a whole” (p. 242). Andreas Köstenberger sees that the cosmic battle between believers and Satan’s minions today reflects “the two warring ‘seeds’—the seed of Satan and the seed of the woman” (p. 283). This is based on connections between the Protoevangelium and the Johannine in 1 John 3:9 and Revelation 12:17.

Rita Cefalu examines the importance of redemptive-historical motifs in Peter’s speeches in Acts 2–3. She argues that 2 Samuel 7:12–13 is the basis for Peter’s understanding of Psalms 16:8–11 and 110:1, which bear witness to the suffering and glory of Jesus Christ. Brian Rosner focuses on Romans 16:20a, “The God of peace will soon crush Satan under your feet,” and argues that this is a summary statement of key texts in Romans and Paul’s “second peace benediction in the Romans letter closing” (p. 314).

In the first of two essays on the General Epistles, Stephen Motyer argues that Melchizedek’s priesthood, as seen in the book of Hebrews, is not only distinct from the Aaronic, but it undermines and perfects the office of priesthood through the person of Jesus Christ. In the final essay, Paul Williamson leads us from the serpent in Genesis 3 through ambiguous chaos-creature like Rahab, Leviathan, and references to “satan” in OT texts, and argues that the Devil’s unambiguous association with the dragon of Revelation came about only in the intertestamental era (p. 349).

This volume may seem to appear as a narrow appeal to confessional evangelicals, but its scholarship can withstand the most rigorous of critiques. These essays show high sensitivity to the character of the texts, identifying significant motifs and their echoes throughout the OT and the NT. Careful attention given to macrostructural features and development of motifs across books offers extremely perspicacious insights (e.g., Dalrymple’s treatment of Joshua and Judges). Despite the methodological diversity, the essays cohere well, reminding me of a single beam of white light shone through a glass prism, splitting into seventeen different trajectories of development and yet, one of the same. This book is fairly accessible for beginners, but for those familiar with T. D. Alexander’s works and students of biblical theology, this book is a keeper.