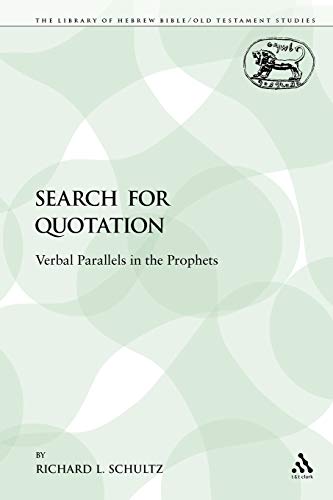 The Search for Quotation (JSOTSup.180)

Phrases and even entire verses whose wording is strikingly similar occur frequently in the prophetic literature, yet their function is often left unexplained in commentaries. Based on a 1989 Yale dissertation written under the guidance of Brevard Childs, this monograph attempts to elucidate the existence of such ‘verbal parallels’ and suggests new avenues for their study. The book is developed in three parts. Part I analyses scholarly literature discussing the phenomenon of verbal parallels. Part II places the issue of prophetic quotation in a larger context, devoting a chapter each to quotation in: ancient Near Eastern literature, early Judaism (focusing on Sirach and the Qumran Hodayoth), in the OT (quotations of proverbial sayings and other speakers), and Western literature. Part III develops ‘a new approach to prophetic quotation’. There are indexes of references and authors, and an appendix of internal verbal parallels in Isaiah.

One of numerous metaphors used by the author to enliven the discussion characterises well his own work: a bee gathering pollen from a variety of blossoms transforms it into honey. Thus Schultz takes up various methodological insights and suggestions in Part I, although his primary aim is to draw attention to unproven assumptions and to note the lack of agreed criteria for identifying quotations and for establishing dependence. His survey reveals that verbal parallels ‘have been viewed as pointing to deficient creativity, textual fluidity, prophetic schools, waning authority, proto-midrashic exegesis, redactional shaping and incipient canonicity’ (109), yet often without much methodological reflection.

Part II continues the pollen-gathering exercise. Among other things, verbal parallels in ancient Near Eastern literature bring to the foreground the issue of distinguishing quotations from formulaic and stereotypical phrases. Sirach and the Hodayoth show that the selection of citations is influenced primarily by the author’s themes and theology, and that there can be a great variety in the frequency, sources and uses made of biblical citations even by the same author. Non-prophetic OT texts reveal that literary quotation is part of the larger phenomenon of ‘foreign voices’ which are incorporated into the biblical text and may fulfil a wide range of functions. The excursion into modern comparative literature studies heightens the sense of complexity of assessing verbal parallels and demonstrates the importance of both the original and the new context. All in all, more or less the same issues seem to arise in all these areas of research. One that Schultz refers to repeatedly is that a verbatim repetition may mean something quite different in a different context, while conversely an inexact repetition may well have the same meaning.

Part III develops a model for ‘quotation criticism’ which is then applied to selected passages in Isaiah. For Schultz, verbal and syntactical correspondence must be analysed diachronically (determining the direction of borrowing, paying attention to setting) and synchronically (determining the function of the passage in the canonical books), and the multi-functionality of quotation must be acknowledged. The examples (Is. 11:6–9/65:25; 8:15/28:13; 40:3, 10; 57:14/62:10–11, Is. 2:2–4/Mic. 4:1–3: Is. 15–16/Jer. 48) demonstrate how attention to these issues can deepen our appreciation of the texts in question, although it also emerges that dating the texts remains as difficult as ever. The book offers much that is worth reflecting on. It is to be hoped that in due course it will inform commentaries and introductory texts and thus be of use to a wider audience.