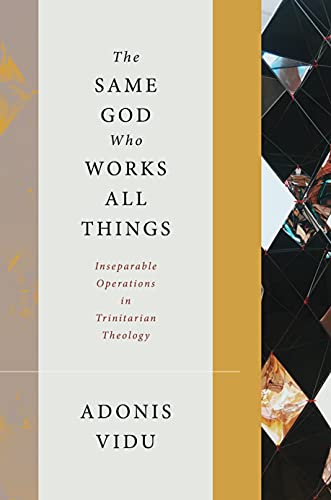 The Same God Who Works All Things: Inseparable Operations in Trinitarian Theology

What does it mean for God to act? This simple question taps into one of the deepest mysteries of the Christian faith. In this volume, Adonis Vidu gives a comprehensive account of God’s triune action that draws on biblical language, the great tradition, and careful theological formulation.

Vidu’s primary aim is to define and defend the facet of classical theism which affirms that the works of the triune God outside of himself are indivisible (opera trinitatis ad extra sunt indivisa). For Vidu, this affirmation functions not as an isolated proposition but as “a dogmatic rule” that normalizes and qualifies other theological formulations and systematic descriptions (p. xiv). This theological formulation was initially established and consistently affirmed because of the conviction that “scripture ascribes the selfsame actions to the Son as much as to the Father and the Holy Spirit” (p. xiv). Recognizing the confessional dimension of this assertion about God’s inner being and action, Vidu summarizes, “In faith we confess that since God is triune—something we have learned not from observing separate effects, but having been taught propositionally to ascribe the same effects to Father, Son, and Holy Spirit—we have to describe every divine action in inseparable-Trinitarian terms” (p. 322).

Vidu lays the foundation for his study in the opening three chapters. First, he examines the biblical-theological basis for the doctrine of inseparable operations by articulating the claims of Jewish monotheism and reckoning with the way the New Testament writers speak of Christ and the Spirit as included in both divine acts and thus within the divine identity. Second, he surveys the “rise and decline” of inseparable operations in the history of interpretation, emphasizing the patristic era and its development and “debugging” in Augustine and Aquinas before the critiques and modifications of the doctrine in the modern period. Third, Vidu gives a systematic account of the language of triune causality and briefly engages a critique of social trinitarianism.

A distinction that is critical for Vidu and his project throughout the book is between what he calls “soft” and “hard” inseparability (see pp. xiii–xiv, 91–125). Vidu’s contention is that much modern theological treatment of the Trinity affirms a soft inseparability that views the works of God in the divine economy as carefully coordinated but not necessarily undivided. In some versions of this model, these coordinated works (with which God accomplishes his will in the world) are the means by which we might distinguish between the persons of the Trinity. By contrast, a hard inseparability understands every action of God outside of himself to be an undivided act of the entire Trinity. There is an order (taxis) to this action whereby we might recognize through revelation that a work of God is from the Father, through the Son, and in the Spirit. However, the external works of God are not a means of individuating the persons of Father, Son, and Spirit.

In making these clarifications, Vidu is seeking to reckon with the fact that “during the past century the rule has gone from being part of the very foundation of Trinitarian dogma to being dodged as one of its greatest vulnerabilities” (p. xvi). An important key to the distance between hard and soft inseparability is the divergent ways the creator/creation distinction is understood and related to language about God and his action in the world (see pp. 126–29).

In the remaining six chapters, Vidu tests his thesis as he works through the theological loci most germane to his account of triune action. Central here is a Trinitarian account of creation and the incarnation (chapters 4 and 5). A full account of God’s triune act of creation is strategically significant for Vidu because it is the singular act that can be characterized as divine without remainder. The incarnation, too, is the most theologically loaded challenge to the notion of inseparable operations (that the Son alone becomes incarnate). Examining the logic of Christ’s incarnational action, Vidu next pursues the meaning of Christ’s two natures for his personal actions and his work of atonement (chs. 6–7). To extend the scope of his study, Vidu reflects on the ascension of Christ and the coming of the Spirit in terms of the divine missions (ch. 8). He concludes his theological study by considering the indwelling of the Holy Spirit among believers and developing a trinitarian account of God’s love (ch. 9).

There are many angles from which one might examine the significance of Vidu’s work. His extended analysis of the way that inseparable operations inform or problematize various doctrines opens up several avenues for further reflection. His confidence that Aquinas anticipates and/or has the resources necessary to answer the challenges of modern theological critiques of the inseparability rule is also an area rife for engagement. Here I will focus on two salient features of this study’s method: the strategic significance of the biblical idiom and the theological humility required to the study the doctrine of the Trinity.

One of the clear strengths of Vidu’s project is the biblical-theological foundation he lays for his affirmation and analysis of inseparable operations (see pp. 1–51). While it is possible to arrive at the inseparability rule by tracing the theo-logic of God’s being in the doctrine of God (God is a simple divine being whose acts can thus not be divided), Vidu stresses throughout that the rule was initially articulated and developed from an inductive reflection on biblical texts. Drawing on the work of scholars like Richard Bauckham and Larry Hurtado, Vidu argues that in his incarnation, Jesus as the Son of God did things only Yahweh could do. The New Testament writers are then bold to articulate just this implication. They identify the actions of Jesus with the actions of the only true God of Israel. Here Vidu highlights Paul’s use of the Shema in 1 Corinthians 6:8 and the unique relationship between the works of the Father and the Son in John’s Gospel.

The force of this two-testament biblical idiom, then, prompts the inclusion of Jesus in the divine identity and the affirmation that Father and Son act not only in unison but without division. Thus, from Vidu’s perspective, the inseparability rule is not only a philosophical postulate logically coherent with theology proper but more profoundly a theological judgment made by the biblical authors themselves. “Trinitarian theology,” he insists, is “best understood as mining the semantic depth of the Scriptures” (p. 62). Accordingly, “the primary reason for the confession of the doctrine of inseparable operations is that it is a datum of revelation” (p. 91). Recognizing this theological judgment in biblical texts then prompts an “exploration of its conceptual coherence” (p. 91). For Vidu, this process of reflection is “initiated in Scripture and continued in pro-Nicene theology” (p. 91).

Another striking feature of Vidu’s account is his disposition and argument about the nature of “God-talk.” For Vidu, because of the reality of the creator/creation divide, theologians should maintain an epistemic humility when contemplating God’s being and divine activity. This disposition is also necessary given the nature of divine revelation. The doctrine of the Trinity in general and inseparable operations in particular requires both the revelation of God in the missions of the Son and Spirit and also the accompanying verbal revelation of Scripture. This mediated theological reality should temper our theological language about both God’s economy and divine nature. We can learn genuine knowledge about God from his acts in human history (creation and redemption) but only because we have received by faith divine revelation that displays and interprets these actions (see pp. 319–26).

Theological humility is required both by the grandeur of the subject (the inner being of the transcendent God) and also the shape of the doctrine itself (ordered knowledge received by faith). In this sense, Vidu argues that we cannot comprehend God but rather witness to the reality of God’s revelation. Rather than an explication of the divine essence, this work is “a modest exercise in theological grammar” (xiv). Vidu reflects further that “the apophatic character of Trinitarian doctrine is quite appropriate, given the reality it fearfully contemplates” (p. 95). Regarding his focus in this book, too, Vidu notes that “while the doctrine of inseparable operations must not be surrendered, it is not the final word on triune agency” (p. 14). Thus while Vidu’s work is the only current full-length monograph on inseparable operations, he maintains a disposition of theological humility, recognizes the modesty of his specific claims, and strives to locate his project within the great tradition of theologians and biblical interpreters.

Because it delves into issues of God’s internal being within himself and external action in relation to creation, this volume is dense and at times very technical. The unfolding of Vidu’s argument, though, is clearly structured and carefully articulated. Vidu shows that the affirmation of inseparable operations guides and governs several related dogmatic claims and is also formulated on the basis of patterns and concepts found in biblical texts. The disciplined reader will thus greatly benefit from this comprehensive and instructive volume.