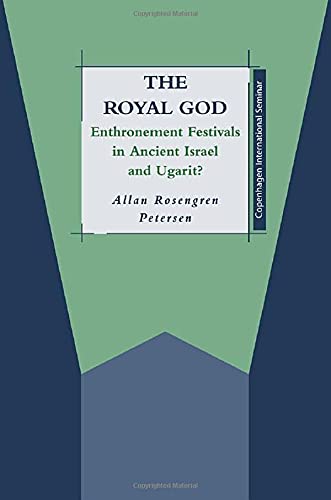 This book asks whether there existed an enthronement festival of Yahweh in ancient Israel, and whether the ritual explanation of the Ugaritic Baal Cycle is appropriate. Both questions have been adequately answered during recent decades, with ‘almost certainly not’ for the first and ‘possible but improbable’ for the second. Petersen’s study adds little new to the discussion. It is a revision of a prize-winning essay at the University of Copenhagen in 1992, which may explain the omission of Mark Smith’s fundamental study of the Baal Cycle (1994), but not that of earlier important books like Joachim Jeremias’s Königtum Gottes in den Psalmen (1987) and Oswald Loretz’s Ugarit-Texte und Thronbesteigungspsalmen (1988). Many scholars who contest the ritual reading of the Baal Cycle are also absent from Petersen’s bibliography.

Petersen first presents Sigmund Mowinckel’s thesis that in their New Year festival pre-exilic Israel celebrated Yahweh’s conquest of the powers of chaos and death and his re-enthronement. When the Ugaritic texts were found, they were read by Mowinckel’s followers as ritual drama, and seen as further evidence for the existence of Israel’s festival. Petersen investigates both biblical and Ugaritic arguments for Mowinckel’s thesis. In the ‘myth and ritual’ theory of Mowinckel, Psalms 47, 93, 95–100 are considered ‘liturgical’: they provide the outline of a cultic drama. Petersen offers a valuable (though not new) critique of Mowinckel’s method of studying the royal Psalms, arguing that almost any mythical text can be given a ‘cultic’ meaning if one adopts a cultic perspective. In other words, a cultic approach largely determines the result of the investigation. Petersen criticises among others Theodore Gaster’s ritual explanation of the Baal Cycle in Thespis (1961). He demonstrates that a cultic function of the Baal Cycle has been assumed rather than sustained, and that an inseparable connection between myth and ritual has not been proven. Petersen’s most interesting chapter is his close investigation of where the Ugaritic clay tablets have been found, and what this locus can reveal as to their Sitz im Leben (ch. 5, previously published in SJOT 8).

So Petersen concludes that the cultic hypothesis is unnecessary. On the contrary, the Baal Cycle even contains anti-cultic potential, since every human effort to influence Baal’s battle with Yam and Mot (and subsequently rain and drought) is a failure—cultic acts are therefore senseless. However, this is a highly reductive view of the function of human religion. Wittgenstein argued against James Frazier that the fact that so-called primitives only asked the gods for rain during the wet season showed that their religion was much more than just ‘influencing the gods’. In his other conclusions Petersen shows himself a representative of the ‘Copenhagen School’, which is known for its highly critical view of the OT as a collection of ideological and mostly very late writings. In summary, Petersen offers a good critique of some old theories, but fails to include recent literature and is not very convincing in his own conclusions.