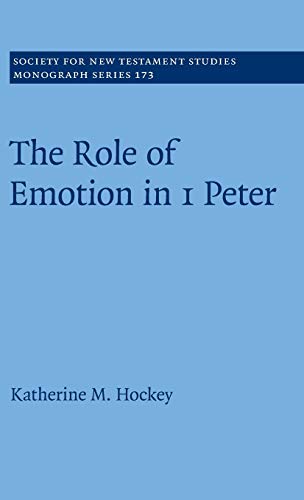 The Role of Emotion in 1 Peter

This book is a revised version of the Durham PhD thesis of Katherine M. Hockey, the inaugural Kirby Laing Postdoctoral Fellow in New Testament Studies at the University of Aberdeen. In this book, Hockey describes how various emotions function in 1 Peter. She divides her book into four parts. Parts 1–2 are the methodological and historical foundation for her particular argument that 1 Peter reinforces Christian identity in the face of persecution by encouraging its readers to have joy in God even as they suffer (part 3) and to have fearful hope in God to vindicate them at the final judgment (part 4).

In Parts 1–2, Hockey argues that investigating how 1 Peter seeks to shape its audience’s emotions is an important enterprise in light of both modern emotion theory and ancient understandings of emotion. Hockey follows contemporary emotion theorists who have shown emotions to be “evaluative judgments … about [an] object’s impact upon personal goals,” which then “influence behavior” (p. 39). She argues that in the ancient Roman empire, Stoics in particular understood emotions similarly (p. 75). Furthermore, Greco-Roman writers agreed that to change an audience’s “evaluation of the world,” one needed to appeal to emotions (p. 93). As a letter of exhortation from this social context (1 Pet 5:12), 1 Peter may be expected to address its audience’s emotions.

In Parts 3–4, Hockey contends that 1 Peter presents God as the proper object of Christians’ joy, fear, and hope, which frees Christians from fear of others and from feeling shame at non-Christians’ persecution of them. In contrast to Stoics, who found joy in detachment, Christians are to find joy in God, even as they suffer as his people, because they “prefer their new life in God over their old social bonds” (p. 135). Though Stoics considered fear always to be a negative emotion, 1 Peter commands Christians to fear God because that fear frees them from fearing any other person (p. 201). Because God is both impartial Judge and Father of Christians (1 Pet 1:17), Christians should not only fear God as the One who has the power both to give and withhold good but should also hope in God as the One who has already shown himself to be disposed to bless them (1 Pet 1:3–5, 18–21; pp. 222–4). Therefore, Christians should not feel ashamed of non-Christians’ persecution of them but should realize that those non-Christians are themselves shameful for being opposed to God and his people (1 Pet 2:6–8; 4:14–16; pp. 243–6).

Hockey’s arguments concerning how joy, fear, hope, and shame function in 1 Peter cannot be overturned easily and are helpful for properly interpreting 1 Peter. Her contention that 1 Peter commends God as the object of Christians’ present joy is particularly necessary, given how some scholars claim that suffering itself should be the object of Christians’ joy (e.g., Paul J. Achtemeier, 1 Peter: A Commentary on 1 Peter, Herm [Minneapolis: Fortress, 1996], 102). Similarly, Hockey’s repeated refrain that 1 Peter reframes future-oriented emotions like fear and shame to be directed toward God rather than toward other people convincingly reinforces the commands in 1 Peter that Christians fear God rather than other people (1 Pet 2:13–3:7). Hockey’s arguments on this point are especially prevalent against feminist scholars who construe early Christian wives “as hopeless, isolated, silent victims” (p. 224 n. 180, citing Jennifer G. Bird, Abuse, Power, and Fearful Obedience: Reconsidering 1 Peter’s Commands to Wives, LNTS 442 [London: T&T Clark, 2011], 121–3). Hockey’s exegesis of 1 Peter 3:5, based on insights from emotion theory, shows that “hope reminds the believers,” who “have agency over their present orientation and action,” that “they are utterly dependent on God” (p. 224). In these instances and more, this book shows that investigating emotions in 1 Peter “opens up new avenues for discussion, and can even provide corrective tools” (p. 268).

In this book, Hockey makes an invaluable contribution not only to scholarship on 1 Peter in particular but also to scholarship on the New Testament in general. First, The Role of Emotion in 1 Peter lays the foundation for other scholars to investigate how “love and the absence of anger” function 1 Peter, which Hockey does not treat in this book (p. 268). This book also presents a vigorous methodology for determining how emotions work (chs. 2–4) that may be equally applied to other New Testament epistles.

Although much of Hockey’s scholarship in this book is commendable, evangelical readers in particular should beware of a few of her assumptions. In her excursus on “the location of the letter” at the end of Part 1, for example, Hockey agrees with the critical scholarly consensus that 1 Peter is pseudonymous and was written after the death of the apostle Peter (pp. 46–47). These assumptions are not vital to her exegetical work in Parts 3–4.

Scholars and students of 1 Peter will find Hockey’s book especially insightful, and scholars who do future work on how emotions function in other New Testament epistles need to engage this book. Nevertheless, even pastors and biblical counselors may profit from Hockey’s thorough discussion of emotions and find in it helpful suggestions for how to lead people to conform their worldviews to that of God’s revealed will in Scripture.