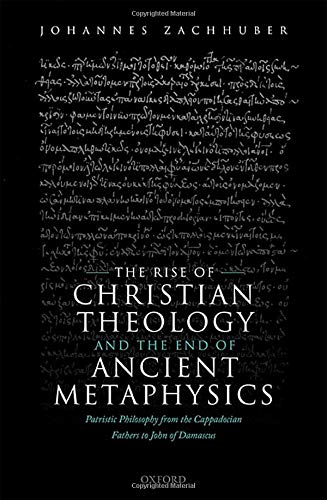 The Rise of Christian Theology and the End of Ancient Metaphysics

Against recent claims that Cappadocian philosophy embodied a fundamental ontological shift from unity to particularity (or from the universal to the particular), Zachhuber argues that there was indeed a shift in the ontological basis of Patristic thought, but this shift occurred much later. Recent scholarship has claimed that the Cappadocians developed a view of the relationship between particulars (a human) and their class or universal (humanity) that emphasized the reality of the particular over the universal. This would have been a fundamental break from Greek philosophy. However, Zachhuber argues that Cappadocian philosophy (“classical theory”) was fundamentally oriented towards the reality and significance of the universal over the particular (the “one” over the “many”). However, the outbreak of Christological controversies in the 4th and 5th centuries sowed the seeds for this philosophy’s transformation. Particularly, the definition of Chalcedon became a catalyst for ontological developments in both Chalcedonian and anti-Chalcedonian Miaphysite thought, as both schools sought to apply classical theory to the challenge of Christ’s dual consubstantiality (i.e., his identity with God and humanity).

For Zachhuber, classical theory can be characterised by its two poles, an “abstract theory,” deriving from Basil of Caesarea, and a “concrete theory,” deriving from Gregory of Nyssa. The “abstract theory” established the binary relationship of ousia, understood on analogy with the universal, and hypostasis, understood on analogy with the particular. Nyssa’s “concrete theory” identified the universal as the ontologically primary entity, for which the hypostases’ role was “little more than to provide concrete realizations for the universal. They are, we might say, only hypostases of the single ousia or nature” (10). The problem of using a universally oriented theory to explain Christology, with its focus on a particular individual, was not immediately apparent. It emerged, Zachhuber argues, when post-Chalcedonian parties (both its proponents and antagonists) applied the conceptual apparatus of the classical theory to the conceptual problem of Christology.

Most of the book concerns this narrative, the evolution of Patristic ontology through the church fathers’ meditation on Christology. Chapters 4–6 consider the developments within Miaphysitism, from Severus of Antioch (d. 538) through Peter Callinicus (d. 591). Zachhuber argues that the Miaphysites emphasised the concrete pole of classical theory, seeking to hold the ontological connection between the particular and the universal. This trajectory resulted from various theories around the concept of an individual nature, such that nature remained the concrete entity and yet found only particularised existence. The rejection of the Cappadocians’ concrete universal naturally led towards “tritheism,” the enumeration of each trinitarian hypostasis (defined as a particular nature). This development was seen especially in John Philoponus (d. 570).

Chapters 7–10 continue this narrative, focusing on Chalcedonianism from John of Caesarea (or John the Grammarian) to John of Damascus (d. 749). Whereas the Miaphysites concentrate on the concrete dimension of classical theory, the Chalcedonians focused on the abstract dimension (with the minor exception of Maximus, whom Zachhuber argues attempted to reintegrate Nyssa’s concrete universal). In John of Damascus, the abstract pole of Cappadocian theory led to the severing of the connection between essence and existence, which had thus far been inextricably connected. By moving the locus of being from nature or ousia to hypostasis, John substantiated the claim that multiple ousia could be found in a single hypostasis. The hypostasis no longer indicated the ousia’s individuation but was itself existent and so individuated (though every hypostasis necessarily had an inhering substance).

Zachhuber identifies this development, a newfound focus on individuality and the separation of essence (what something is) and existence (that something is), as the unique contribution of Patristic philosophy. The last chapter suggests areas for further study of this philosophy’s influence but does not attempt to contribute towards this end.

Zachhuber demonstrates a thorough acquaintance with the primary sources and the relevant secondary literature, particularly for the Post-Chalcedonian period. Though at times dense and containing formatting errors, his presentation is sufficient to communicate the argument. The narrative for which he argues is convincing in its overall contours.

However, Zachhuber’s interaction with the Christological discussion up to Chalcedon is open to criticism. On page 106, for example, the final paragraph suggests that Eutyches’s rejection of the double homoousion led to his condemnation at Chalcedon (451) not the Constantinople home synod in 448, the minutes of which were read at Chalcedon. Also, Zachhuber suggests that the “one hypostasis” of the formula “two natures in one hypostasis” was not found in the definition of Chalcedon, which is not true (Acts of Chalcedon Actio V §34, ln. 33 in Greek). Finally, it is arguable that the ontological achievement which Zachhuber credits to the 8th century was already incipient though not thoroughly developed in the 4th and 5th centuries. Apollinaris, unwittingly followed by Cyril of Alexandria, appears to have separated essence from existence. Zachhuber argues that physis (“nature”) was equivalent to universal ousia (“essence”) in Apollinaris (p. 98). However, a close reading of the text cited by Zachhuber, Apollinaris’s other writings (e.g., Fragments 113, 142; He Kata Meros Pistis; Tomus Synodalis), and similar texts in Cyril suggests that for both Apollinaris and Cyril, physis could refer to a concrete individual as distinct from an essence.

These points aside, the dominant interpretation of Nicaean theology presented by the Cappadocians provided the framework for later discussion. For its persuasive narrative of the evolution in Cappadocian classical theory, Zachhuber’s work is a significant contribution to our understanding of the development of patristic thought. It lays a foundation for the study of its influence in Western and Eastern Christendom and beyond.