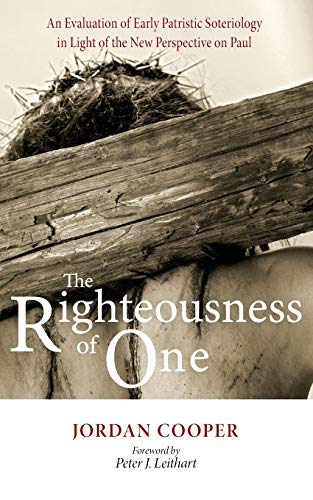 The Righteousness of One: An Evaluation of Early Patristic Soteriology in Light of the New Perspective on Paul

The New Perspective on Paul (NPP) has taken center stage in Pauline studies for the past four decades or so. The primary actors in the drama, Krister Stendahl, E. P. Sanders, James D. G. Dunn, and N. T. Wright, have cast serious doubt on the Lutheran understanding of justification, even though each of these men represent their own nuanced view. If nothing else, the advent of the NPP has sent scholars ad fontes, reexamining Paul and Second Temple literature to discover new evidence that might shed light on this reinterpretation of Paul. The surprising oversight in the search for Pauline justification has been the disregard of the Fathers. How did the doctrine of justification fare with those who were left to continue the church after the apostles were martyred? Since the Fathers were the first interpreters of Paul, it only makes sense to examine their thoughts on this important Pauline doctrine. Jordan Cooper has entered the fray from this neglected vantage point. Cooper is a Pastor in the American Association of Lutheran Churches (AALC) and has written a smattering of other articles.

Cooper’s thesis is that Luther did not invent a view of justification that would have been foreign to Paul, as the NPP has so frequently claimed; rather, the same understanding of justification that Luther held was first believed long before him in the second century. That is, “Within one hundred years of the writing of Romans and Galatians, the themes that informed Luther’s thought were accepted by many in the church” (p. 97). Cooper states,

for the criticisms of Stendahl, Wright, and Dunn to have validity, two historical truths must be established that are often presupposed rather than defended: first, that the introspective, individualistic Luther, who regards justification as a purely legal transfer term, being critiqued is an accurate picture of the reformer; second, that the Augustinian reading of Paul is the beginning of an understanding of Paulinism concerned with individual salvation. (pp. 13–14)

Cooper refutes them on both counts. His aim is both to exonerate Luther from the caricatures that have marred his image and to provide evidence from the second century that shows continuity with Luther’s thought.

Chapter 1 rehearses the oft-tread history of the NPP, briefly examining the contributions of Krister Stendahl, E. P. Sanders, James D. G. Dunn, and N. T. Wright. Chapter 2 contains an overview of Cooper’s methodology, which includes laying the important foundation of his presuppositions as they relate to Paul, Luther, and the Patristic sources. Cooper wisely acknowledges that everyone is prone to his or her reading of texts that is, for better or worse, tainted by the glasses of one’s own tradition. As a Lutheran, Cooper is certainly open to the charge of reading Luther favorably, though he handles the sources fairly throughout. Chapter 3 traces the major studies conducted on justification in the early church, for instance, those of George Stanley Faber (The Primitive Doctrine of Justification), Thomas F. Torrance (The Doctrine of Grace in the Apostolic Fathers), and Alister McGrath (Iustitia Dei), to name a few.

Chapter 4 is where Cooper begins to build his case. Here he puts forth his understanding of Luther, which is much more complex than many scholars have assumed. Cooper disallows a flat, monolithic approach to Luther that centers on law-court imagery. Luther himself was not immune to fine-tuning, or in some cases, altering his views over the course of his life. For Cooper, the indwelling of Christ is crucial to Luther’s theology of justification. On this point he relies heavily on the work of Tuomo Mannermaa (Christ Present in Faith), even though he does offer several critiques of Mannermaa’s work (pp. 61–63). Cooper concludes, “For Luther, justification is based on a prior union between the believer and Christ” (p. 67). Chapter 5 is a treatment of three Apostolic Fathers—1 Clement, Ignatius, and the Epistle to Diognetus. Focusing on 1 Clement 32, much of the Ignatius corpus, but especially Phld. 8.2, and Diognetus 9, Cooper argues that each writer has a conception of justification that would align with Luther’s own view. Chapter 6 is devoted to Justin Martyr. Cooper is right that any discussion about justification in the early church must move beyond the Apostolic Fathers (p. 98; an error that Torrance made). In Justin, Cooper sees individualistic salvation, imputation, and theosis. However, he also believes Justin rejects sola fide because of his emphasis on personal righteousness (p. 126). Nevertheless, Luther would look fondly on Justin’s high view of union with Christ.

The overall achievement of this book is laudable. Cooper exposes a major oversight of how Paul’s doctrine was appropriated in the century following his death (interested readers should also consult the fabulous work by Michael Bird and Joseph Dodson, eds., Paul and the Second Century). The NPP has never taken seriously how justification was taken up by Paul’s successors, assuming, as many have before, that the Fathers immediately turned away from one of Paul’s most cherished doctrines. From this point forward, proponents of the NPP will have to explain why those in the second century had a view of justification that looks suspiciously close to the view of justification that Luther held to. Could it be that Luther read Paul rightly all along? It will be interesting to see how a study such as this impacts further discussions.

While this study does not claim to ring the death knell of the NPP, nor does it claim to be a major work of scholarship (interaction with secondary literature is substantially lacking), there are a few problem areas. To begin with, the study flies over the surface of too many issues that demand deeper reflection, which means that he assumes too much at times. For instance, many debate the influence that Paul even had in the second century, but Cooper takes this for granted. Justin Martyr, for example, does not even mention Paul or clearly cite the Apostle. Along these lines, I thought it a bit strange to argue primarily that the second-century writers agree with Luther, rather than that the second-century writers agree with Paul. Again, I think he assumes this, but his purpose seems to be to show that the second-century writers are Lutheran, rather than Pauline.

In this lucid and well-written book, Cooper asks an important question of the Fathers, one that has surprisingly not been asked: “Do the earliest Christians adopt a view of Paul akin to that of the NPP, or of Luther?” Cooper rightly answers with Luther. The Fathers are the blind spot of the NPP and Cooper’s work should force scholars to look over their shoulders’ and address this issue. Hopefully, if nothing else, this work will beckon more research on this topic. As Peter Leithart said, who wrote the book’s foreword, “Cooper does not claim to pass final judgment on the New Perspective. What he offers is the opportunity to renew the debate in a more historically informed fashion” (p. x).