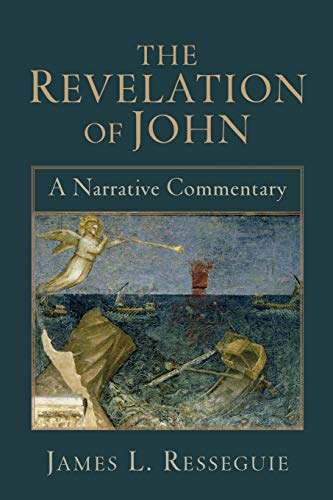 The Revelation of John: A Narrative Commentary

The last book of the NT canon is a complex piece of literature with epistolary, prophetic, and apocalyptic characteristics. Its sometimes confusing but always fascinating visions have evoked many diverse interpretations of this difficult book. James Resseguie, professor of New Testament at Winebrenner Theological Seminary and an ordained minister in the Presbyterian Church (USA), helps point the way forward for interpreters with this mid-length commentary that recognizes that the Book of Revelation is also a narrative. Thus, Resseguie provides a close literary reading of Revelation that builds on the concepts articulated in two of his earlier books, Revelation Unsealed: A Narrative Critical Approach to John’s Apocalypse (Leiden: Brill, 1998) and Narrative Criticism of the New Testament: An Introduction (Grand Rapids: Baker, 2005).

According to Resseguie, a narrative commentary pays careful attention to the way the author has put this work together. “Form and content are an indissoluble whole, and the way John tells his story—the imagery, settings, metaphors, and so forth—is as important as what he has to say” (p. 17). Two emphases emerge in that the narrative is examined as a “unified whole” and careful attention is given to the nuances and subtleties of the text such as “the structure, rhetoric, setting, characters, point of view, plot, and the narrator’s style and his repertoire,” that is, “intertextual allusions, the social and cultural location of the narrator, the political environment, and the evaluative or ideological point of view of the narrator” (pp. 17–18). While these terms from narrative criticism may sound intimidating to those unfamiliar with this methodology, Resseguie has not written this commentary for specialists. Since his intended audience is “upper-level undergraduate students, entry-level seminary and graduate students, and pastors and lay persons who want to read Revelation once again as a compelling story of intrigue” (p. 12), he begins his study with a helpful, forty-three-page introduction that functions as a primer on narrative criticism as applied to Revelation. In addition, Greek terms are placed in the footnotes, always accompanied by transliteration.

The commentary on the text is divided into sections that proceed chapter-by-chapter throughout the book instead of verse-by-verse, with the prologue (1:1–8) and epilogue (22:6–21) each given separate sections, and Rev 2–3 and 8–9 both analyzed as units of text. As an aid for further reflection, eight photographs of Albrecht Dürer’s woodcuts from The Apocalypse of Saint John (1496–98) are included throughout the commentary, visually illustrating various scenes from John’s visions. Finally, the book concludes with a bibliography, subject index, index of modern authors, and a Scripture index.

In a biblical book where it is easy to get bogged down in complex debates over details, Resseguie offers a refreshing close reading of the overall narrative that orientates the reader to the overarching thrust of John’s visions. Consequently, this commentary’s focus and length does not lend itself to detailed analysis of text-critical issues, dating, authorship, social situation, or extended discussions of the various exegetical options. However, Resseguie frequently points his readers in the footnotes to other sources in the secondary literature on Revelation that discuss these matters more completely. Thus, the student of Revelation may look to Resseguie for the big-picture approach, but will need to consult other commentaries that perform in-depth exegesis of the textual details. Additionally, Resseguie occasionally performs the helpful service of notifying his readers when other scholars disagree with his own reading of the text or provide a different approach (e.g. pp. 45n73, 47n79).

In regard to some of the more important interpretive debates that every commentator must struggle with in Revelation, Resseguie understands the book’s structure as a “literary progression” (but not a strict linear chronology) instead of a nonlinear recapitulation approach (pp. 54–59). He provides a fascinating reading of the book’s masterplot as “a quest of the people of God to find their way home, to the new promised land. After exile from the garden of Eden, how can humankind find its way back to paradise? John develops and elaborates this masterplot through allusions to the exodus and exile” (pp. 46–47). Based on the relationship between two points of view, inner reality (what John hears) and outward reality (what John sees), the 144,000 in Rev 7:1–8 should probably be identified with the innumerable multitude in 7:9–17 (p. 137). Revelation 11:13 depicts an actual response of genuine repentance to the witness of the suffering church (p. 166). In Rev 20:4–6, Resseguie finds two bodily resurrections instead of the viewpoint that the first one is spiritual in 20:4 (p. 247). He follows Richard Bauckham in his understanding of the meaning of the millennium, concluding that John is not interested in some of the details which we ask about today. The main point is that “from an above point of view God’s ways are vindicated and the martyrs are victorious” (pp. 245–46).

In sum, Resseguie offers a unified, coherent reading of Revelation as a narrative (cf. the similar method but sometimes differing results of David Barr’s Tales of the End: A Narrative Commentary on the Book of Revelation [Santa Rosa, CA: Polebridge, 1998]). His opening primer on narrative criticism as it is applied to Revelation is especially useful (e.g., see his intriguing discussion of numbers and numerical sequences [pp. 28–32]) and will provide students and pastors with a good understanding of the benefits gained by this type of reading. However, in order to better understand Revelation, this methodology should be used in conjunction with other ways of studying the book, and the reader will want to make good use of the suggested resources in Resseguie’s footnotes.