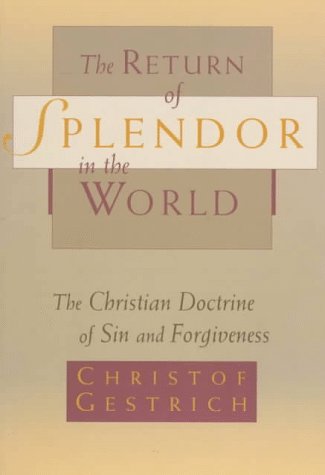 The Return of Splendor in the World: The Christian Doctrine of Sin and Forgiveness

This volume is a translation of the 1989 German work, Die Wiederskehr des Glanzes in der Welt, by Gestricht, professor of systematic theology at Humboldt University in Berlin. It is a classic exercise in traditional systematic theology, drawing upon psychology, philosophy, history, anthropology and biblical exegesis for its substance. It is structured in such a way that advanced students may interact with it in formulating and refining their own theology of sin and forgiveness. But it is not for the casual reader or beginning student; working through the content is laborious because of its German style along with its depth of thought.

The author has made every effort to be contemporary and practical. He sets the stage for the endeavour with a series of meditations which suggest that the entrance of sin into the world has resulted in a loss of God’s splendour (Gestricht’s rendering of the Hebrew labod and the Greek doxa) in all of creation. He then examines pertinent questions arising from the contemporary situation: What relationship does sin have to therapeutic methodologies? Or to the sense of meaninglessness which pervades people? How can postmoderns understand God, sin, and evil, given present capacities for mayhem and destruction? Gestricht sees sin as a failure of the human will to harmonise itself with the will of God, although when one has delved somewhat further into the book, sin is more clearly defined as ‘a human disrespect for God’s being and work’ (p. 63). The book concludes with lengthy suggestions for proclaiming and according forgiveness to humanity, the means of restoring God’s splendour.

Evangelicals will be less than happy with Gestricht’s work, for it is a volume which is in more of a neo-orthodox vein. Most, for example, would take exception to his admiration for Teilhard and subsequent declaration that ‘the history of evolution and the history of salvation are ultimately coextensive’ (p. 58). Nor would they agree that theology’s task is to interpret the history of evolution theistically and his adherence to the documentary hypothesis in discussing OT passages is somewhat old-fashioned.

Nevertheless, the work has its thought-provoking sections. The author has done a solid job in discussing the history of the interpretation of Genesis 3 (the Fall); while most evangelicals probably would not agree with his conclusions (especially his seeing the biblical account as a myth setting out our first parents’ fall as prototypical of all humankind), their understanding of developments in the formulation of a doctrine of original sin would be greatly advanced. He uses the Genesis passage as a stepping-stone to Romans 5:12ff., from which he correctly surmises that inherited (i.e. original) sin cannot be deduced from the NT. In like manner, his discussion of the use of the sacraments in dealing with sin is helpful, even to those evangelicals who would tend to downplay them; Gestricht rightly observes that the Lord’s Supper is not for the forgiveness of sins, but rather, one must be forgiven before coming to the Table! The Sacrament of Penance must precede the Sacrament of Communion.

Should this book be at the top of the list for someone interested in understanding the doctrine of forgiveness? Probably not! Instead I would commend to evangelical students Ted Peter’s Sin: Radical Evil in Soul and Society (Eerdmans, 1994) or my own, With Willful Intent: A Theology of Sin (Baker/BridgePoint, 1994). On the other hand, for someone with a solid understanding, interacting with Gestricht’s work would provide much help and food for thought in fine tuning one’s own theology of sin and forgiveness.