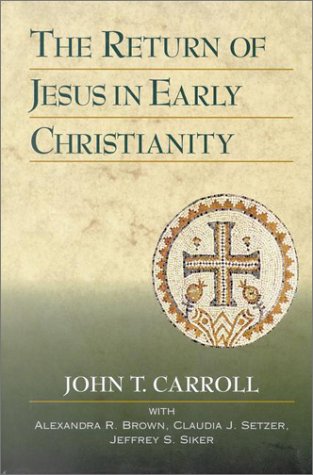 THE RETURN OF JESUS IN EARLY CHRISTIANITY

The book contains seven essays: the first four being devoted to studies of the theme in different groups of NT writings; the fifth essay follows up with a study of Christ’s return in the early Church; the sixth is a review of Messianism in early Jewish writings, and the seventh is an essay on the present day relevance and meaning of the theme.

The first four essays are consciously textual is the sense that they mainly ask what the texts explicitly say, and what place or function the concept of Christ’s return has in the different NT writings. They do not attempt to write a genetic history of how early Christian eschatology was formed and it became what it is. The latter project would perhaps have resulted in a more fascinating and ambitious book, but also a more controversial one.

First of all John T. Carroll looks at the synoptic Gospels and Acts. This is a useful and balanced review of recent points of view with a mainly redaction critical type of exegesis. The teaching that is considered is that of Mark, Matthew, Luke (Gospel and Acts), not that of Jesus. This is no doubt the current method today; yet the present reviewer would have appreciated an attempt to say something more about the return of Jesus according to Jesus himself.

The next essay is by Alexandra R. Brown who writes about the supposedly genuine letters of Paul. Here Brown surveys the material in a clear and well-organised fashion. She has a useful discussion of how to balance between an interpretation which makes exhortation to ethical activism the main point of Paul’s eschatological sayings and a theocentric interpretation which makes the cosmological dimension of God’s saving act the focus.

The third essay (by Carroll), surveys the Johannine corpus. Not unexpectedly, Carroll finds a gradual turning from a strongly ‘realised’ eschatology in the Gospel of John to an as strongly futuristic eschatology in Revelation, with the Letters in the middle. The discussion is up to date and well balanced.

Carroll also treats the remaining NT writings of relevance for the issue, and thus prepares the way for the fifth essay by Jeffrey S. Siker: ‘The Parousia of Jesus in Second and Third Century Christianity’. It goes without saying that treating this much greater material in some 20 pages calls for much more sketchy treatment than in the NT essays. Given the limitations, Siker does a good job in pointing out the broad spectrum in eschatological scenarios, from Gnostic spiritualisation and an extreme version of ‘realised’ eschatology on the one hand, to the very literal and concrete end-time scenarios in Justin, Irenaeus and their followers on the other. I also think he gets it about right concerning the different degrees of Naherwartung in the second and third centuries.

The Sixth essay has a somewhat different character. Here Claudia J. Setzer provides Jewish background material for the early Christian teaching on the Messiahship and return of Jesus. I think she (with J.J. Collins) is right to say that in present day scholarship the pendulum may have swung too far in downplaying the centrality of the expectation of a Messiah in Judaism of the centuries at the beginning of the Christian era. Setzer’s essay is brief but provides much useful information, and it really helps in profiling the NT material.

In the final essay Carroll provides a very short review of eschatological doctrines between the third century and our own time, and ends with a discussion of the present relevance and meaning of the early Christian doctrines. He finds that a narrowing-down of eschatological hope to something that only concerns the individual person and its fate beyond individual death, is to betray the concern of NT eschatology for the whole human society, and the ultimate fate of the planet and the cosmos itself. On the other hand, the nearness of death for each individual is what nowadays, after 2000 years, keeps awake the Naherwartung of the early Christians.

This book is an excellent introduction to its theme, and that, as I take it, is exactly what it pretends to be.