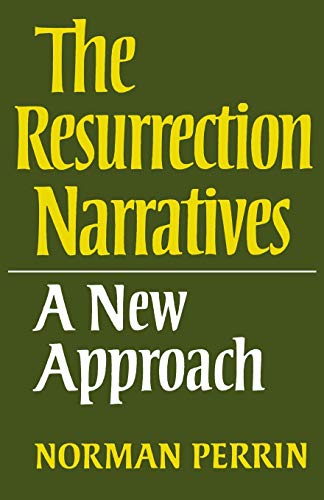 The Resurrection Narratives: A New Approach

Shortly before he died at the end of 1976, Norman Perrin completed this redactional study of the resurrection narratives in the synoptic Gospels. It is written in his usual limpid style with great simplicity and no footnotes. The author examines each of the three narratives in turn, asking what the evangelists were trying to say in the light of their Gospels as a whole. He is concerned with the significance of the narratives as myths, a word which does not mean that the stories are necessarily unhistorical but rather that they function as the narrative expression of what each evangelist thought to be the deepest reality in Christian experience. Mark gives us the brief account of the empty tomb and deliberately avoids narrating any resurrection appearance of Jesus. His concern is not with the church but with all mankind as they face the imminent parousia, and his ‘myth’ deals with Jesus’ victory over death. So his narrative expresses the experience of ‘Jesus as ultimacy in the historicality of my every-day’; this ‘experience transforms my every-dayness as Mark expected the coming of Jesus as Son of man to transform the world’. Matthew was not content with this presentation. He saw the resurrection appearances of Jesus to the women as expressing the continuity between the disciples and the church, and the great commission as the authorization of the church to interpret the verbal revelation of Jesus, sustained by the continuing presence of the risen Jesus. Within the church the Lord sustains those who believe in him. Finally, Luke presents Jesus as the first Christian whom Christians must imitate, as they are empowered by the Spirit. So what happened on Easter morning was that these experiences became possible. But what actually happened? Perrin dismisses the story of the empty tomb as merely an interpretation of the event, but he allows that on the analogy of Paul’s experience there were individuals who had a vision of Jesus which convinced them that God had vindicated Jesus out of his death. Beyond this Perrin is reluctant to go.

Perrin thinks that he has uncovered the central themes of the Easter narratives. He has not reckoned sufficiently with the fact that the evangelists do record the empty-tomb story and other elements which were meant to give evidence that Jesus really had risen. In other words, at least part of the purpose of the evangelists was to ask the question, ‘What actually happened?’—a question which Perrin wrongly regards as alien to their interests. Nor has Perrin reckoned sufficiently with the fact that the Gospel narratives were finally committed to writing in a church whose faith in the resurrection is reflected in the other New Testament writings, a fact which meant that the evangelists could take certain things for granted. His interpretation of Mark is particularly questionable; clearly much depends, as he admits, on his proof that Mark 16:8 was the intended original end of the Gospel, a view which I find difficult to accept.

Nevertheless, Perrin is one of those authors whose writings are highly stimulating, even when he is wrong, and who forces his readers to see things in a new light. He has given us a one-sided approach to the resurrection narratives, but has drawn attention to a dimension of them which must not be overlooked. We need to consider carefully whether the resurrection stories are meant to function as myths which provide the church with a sense of identity and cohesion; but we shall want to conclude that the question of historicity is much more fundamental than Perrin allows. In effect, Perrin argues that ‘Jesus is risen’ is the interpretation of the church’s faith, based on the claims of certain people to have seen Jesus. Paul begins at the other end: If Christ is not risen, your faith is vain.

Is there pseudonymity in the Old Testament?

The Hermeneutical Problem of Genesis 1–11

What are they Saying about Jesus?

Reviewed by Bruce A. Demarest

Rediscovering the Traditions of Israel: The Development of the Traditio-Historical Research of the Old Testament, with Special Consideration of Scandinavian Contributions

Can we Trust the New Testament?