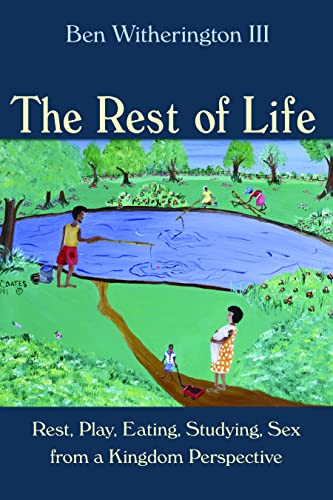 The Rest of Life: Rest, Play, Eating, Studying, Sex from a Kingdom Perspective

Ben Witherington is a gifted and prolific NT scholar who has written a number of excellent monographs that contribute much to the intellectual life of the church. This is a different sort of book, one best appreciated by fans of Witherington who want to spend time with one of our leading theologians. The Rest of Life: Rest, Play, Eating, Studying, Sex from a Kingdom Perspective is structured around five long chapters, which are already named in the subtitle: rest, play, food, Bible study, and sex. The final two essays (on study and sex) are the strongest, the result of extensive research and crisp writing. The chapters on play and rest are summaries of Christian wisdom. We will come to the chapter on eating later.

The introduction to the book says it is addressing “normal weekly events in the normal Christian life,” especially topics we “seldom hear anything about” (p. vii). This applies chiefly to the chapters on play and food. If one wonders how the chapters on rest/Sabbath (including worship) and Bible study match this goal, perhaps they are the sources of direction for the rest of life. Most chapters are eclectic, with academic sections featuring serious exegesis as well as casual sections that may include folksy stories and pastoral words for the reader’s heart. In a departure from typical practices, two of the five chapters feature a very long book review.

The first chapter, on rest, begins with a twenty-page review essay of Sigve Tonstad’s 2009 learned tome, The Lost Meaning of the Sabbath Day, and then moves to the topics of rest and worship. Chapter two, on play, builds on the insights of respected authorities on play, above all the underappreciated Robert Johnston’s outstanding monograph The Christian at Play. Chapter four, on the study of Scripture, is loaded with insights on the proper reading of Scripture, all graced by apt case studies and an invigorating style. The last chapter, on sex, also begins with an extended book review—in this case Rob Bell’s 2007 book Sex God. The review section highlights Witherington’s strengths—his mastery of biblical data and his eye for social commentary. The chapter is strongest when in exegetical mode, going where Witherington wishes, as in the exposition of the qualifications for elders and deacons (p. 141–51).

The reader will notice that I skipped chapter three on food. The style of the chapter suggests a sleepy editor. Consider the double use of the maladroit phrase “context in which” on page 67: “The social context in which the Bible was written was a context in which people ate just to stay alive.” This sentence could simply read, “In biblical times, people ate to survive.” Or, “Today, the superabundance of food tempts us to overeat. In biblical times, the problem was scarcity.” This sort of problem is common. One sentence blandly and repetitively begins, “We have talked about what the Bible says about . . .” (p. 73).

The content of the chapter is disappointing too. When Witherington repeatedly says, “I think I know the reason” (p. 65), “I imagine” (p. 66), “I suspect” (p. 66), and “A moment’s reflection will show” (p. 66; cf. p. 136), he inadvertently implies that he meditated on his topic more than he researched it. There are several pages of biblical data. For example, in pages 68–69, Witherington quotes ten passages that use the word “feasting” and offers helpful comments on some of them. Yet the citations are puzzling. The translations appear to be his, and his renderings commonly disagree with the major English translations. On five occasions he translates the common Greek verb ἐσθίω with “feast” rather than the normal “eat” without explaining his decision.

Witherington wisely devotes a large portion of the chapter to cultural analysis of Western problems, chiefly overeating and obesity. I laud his commitment to sane eating and exercise. Witherington begins with an account of a speech he gave at a Christian convention. He recalls his shock as he gazed at a sea of overweight pastors. Indeed, pastors should show self-discipline, but is it proper to name the denomination (not his own) and the city of the event (p. 65)? Later, he sensibly comments on food in the media. Yet the analysis focuses on two long-defunct television programs featuring popular but widely ridiculed hosts who were more entertainers than chefs. Further, the comments on these men are, at best, rambling and digressive. His cited sources are an obituary for one chef (p. 70) and a Wikipedia article, quoted at length (pp. 71–73), for the other. Witherington is a capable author, a learned man, and a winsome lecturer. But this chapter was a draft, not a completed work.

That said, the other chapters have much good content. Overall, this is a book for Witherington’s many devotees. They will enjoy his unique blend of scholarship and light-hearted observations, crisply stated, on topics of abiding interest.