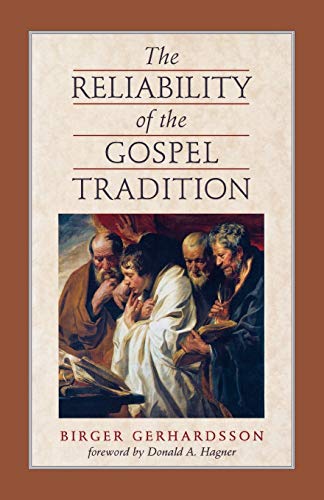 THE RELIABILITY OF THE GOSPEL TRADITION

Written by Birger Gerhardsson Reviewed By Alistair I. Wilson

In this volume we have convenient access to three short writings by Professor Gerhardsson on the reliability of the traditions contained in the canonical Gospels; writings which are commended by Donald Hagner, ‘not merely because they ultimately vindicate the church’s estimate of Jesus, but because they are true to the nature of the Gospels themselves and to the purpose of those who wrote them’ (xvi).

In a Preface to this collection, in which he surveys the reception and development of his work in NT studies, Gerhardsson summarises his conclusions as follows:

For my part, I have become convinced that we can hear the voice of Jesus himself in the Gospels. His pronouncements have been interpreted and clarified by his disciples, but they reach us nevertheless in a reliable form (xxiv).

Following the republication of Gerhardsson’s major book, Memory and Manuscript, along with Tradition and Transmission in Early Christianity (Eerdmans/Dove, 1998), we can also be grateful for the appearance of this collection of shorter writings (which will be much more accessible to students) which stand firmly against some of the confident assertion of the form critics and which still have relevance in contemporary NT studies.