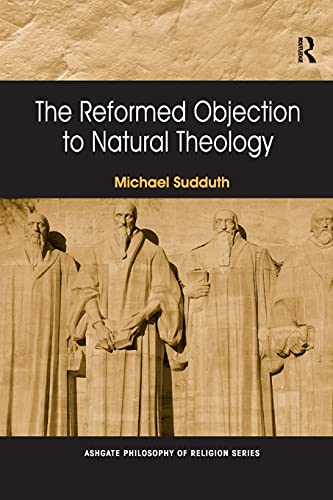 The Reformed Objection to Natural Theology

Michael Sudduth’s monograph is a resounding “Ja!” in response to Karl Barth’s infamous “Nein!” Barth’s is but one voice among many who have contended, under the banner of the Reformed church, that Christians ought to be skeptical of the propriety and efficacy of natural theology (broadly defined as the use of natural reason to acquire or supplement our knowledge of God). This book takes on the task of sympathetically but critically evaluating the most prominent “Reformed objections” to natural theology. The result is an exemplary piece of analytical theology.

The body of the book is presented in four parts. Part I refutes the notion that the Reformed tradition has been characterized by hostility to natural theology from the outset. Sudduth shows to the contrary that Calvin and his fellow Reformers strongly endorsed natural theology α and also made positive, albeit qualified, statements about the use of philosophical arguments for theism. Enthusiasm for natural theology accelerated among Reformed scholars in the seventeenth and eighteenth centuries; it was only at the turn of the twentieth century that the tide began to turn, with substantial (and diverse) objections being raised from such varied quarters as the Dutch Calvinist school (Kuyper et al.), the Neo-Orthodox movement (Barth et al.), and the new “Reformed epistemologists” (Plantinga et al.).

The remainder of the book deals with three distinct kinds of Reformed objections, which the author judges to be the most prominent and worthy of evaluation. Part II considers whether the Reformed consensus that knowledge of God is naturally implanted in the human mind (and is therefore innate or immediate rather than inferred) renders natural theology β either inappropriate or redundant. Sudduth surveys three different Reformed models of the natural knowledge of God, concluding that none of these models undercuts the project of natural theology β; on the contrary, they furnish a foundation for it. Chapter 4 examines whether Alvin Plantinga’s model of warranted theistic beliefs ought to engender the degree of ambivalence (even hostility) to natural theology that Plantinga expressed in the early part of his career. Sudduth’s treatment here is particularly valuable inasmuch as he accurately depicts Plantinga’s basic model and is sympathetic toward it; as it turns out, Plantinga’s own “Reformed objection” to natural theology can be neutralized without having to reject his model for the natural knowledge of God. The overall conclusion of these three chapters is that there is no good Reformed objection to natural theology β from the immediacy of natural theistic knowledge. There is room for both immediate knowledge and inferred knowledge of God, particularly if the latter is understood not as a substitute for the former but rather as reinforcing, refining, and extending it.

Part III evaluates several versions of what may be the most common objection to natural theology from Reformed writers, namely, that the doctrine of total depravity renders natural theology a futile enterprise. On this view, the fall has so corrupted man’s intellect that he is blinded to the natural revelation of God, and his reasoning about God inevitably leads him into error. This particular objection has been fleshed out in different ways. Some have argued that the fall entails the corruption or even eradication of the natural knowledge of God, thus undermining both natural theology α and natural theology β. Others have argued that sin has rendered our reasoning faculties so unreliable, particularly in theological matters, that all natural inferential beliefs about God are suspect. Sudduth’s analysis shows that these objections prove either too much or too little. His most significant response to this form of objection is saved for chapter 8, where he argues that such criticisms typically overlook the dogmatic model of natural theology and its two most important features: its recognition of the reversal of the noetic effects of sin through regeneration and sanctification, and its acknowledgement of an indispensible role for Scripture in providing justification and guidance for the project of natural theology β.

Sudduth turns in Part IV to consider a third kind of Reformed objection to natural theology, one that targets the logic of theistic arguments. The charge here is that the classical arguments for God’s existence simply aren’t good arguments: they don’t constitute logical demonstrations of the existence and nature of God because their premises are neither self-evident nor indubitable, and even if sound they fall short of proving the existence of the Christian God because they fail to establish every biblical attribute of God (the “descriptivist objection”). Sudduth exposes the surprising extent to which Reformed objectors have borrowed philosophical assumptions from Hume and Kant in their criticisms of the classical arguments. His systematic dismantling of these criticisms is impressive. Of particular note is his argument that the descriptivist objection threatens natural theology α no less than natural theology β; it thus proves too much, given that natural theology α has been a staple of Reformed theology from the outset.

In sum, Sudduth presents a meticulously researched and compellingly argued case for the historical pedigree and philosophical legitimacy of Reformed natural theology. His articulation and defense of the dogmatic model is especially valuable for dispelling prevalent misconceptions about the role of natural theology. I daresay that most readers will find their own views challenged at some point. Those looking for a triumphant defense of classical apologetics in the Princeton mold may find themselves disappointed by the modesty of Sudduth’s conclusions. They may feel that those forms of natural theology that emerge unscathed from the Reformed objections (the cogent ones, at least) are thin gruel, offering little of value for positive apologetics with unbelievers. Even so, they shouldn’t underestimate the value of his defense of theistic arguments, for the criticisms he refutes are found as often in the mouths of atheists as believers. On the other side of the field, presuppositionalists may deem the book’s conclusions too generous, but they will be forced nonetheless to reevaluate some of the foundations on which their own fort has been built. Whatever the case, no reader will fail to appreciate the clarity and force of the book’s argumentation, the precision of its analysis, and the invaluable contribution it makes to contemporary discussions of natural theology—not only among the Reformed, but across the spectrum of Christian thought.