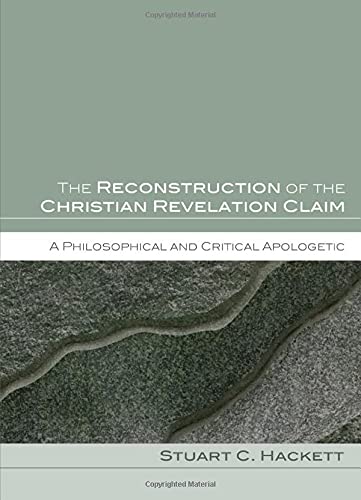 The Reconstruction of the Christian Revelation Claim: A Philosophical and Critical Apologetic

In a very real sense Stuart Hackett, who is Professor of Philosophy of Religion at Trinity Evangelical Divinity School, has produced a summa contra Gentiles. Very similarly to Aquinas in his classic apologetic text, Hackett leads the reader from fundamental philosophical considerations such as epistemology and metaphysics, to theological truths and the need for an individual response to Christ.

The similarity to a medieval summa shows up most clearly in Hackett’s careful interaction with alternative positions to his own. He informs us at the outset that he wishes to be more conciliatory in this work than he was in his youthful Resurrection of Theism. He has brought off this new style well, but without sacrificing cogency. In fact, the book gains in persuasiveness by Hackett’s consistent fairness and courtesy to the other sides.

Of course Hackett’s philosophy is not that of Aquinas. He supports a rational foundationalism in which the basic principles of knowledge are (‘at least in part’) logically independent of sense experience. With this apriorism (Hackett’s own term) he comes out close to the epistemology of Kant.

Structurally this book holds a few surprises. It falls into line with most apologetic books in that after the initial philosophical basics, Hackett makes a case for theism. Then he argues for Jesus Christ, the incarnate Word. Only after that section does he defend scriptural revelation in the Bible. His discussion culminates in an analysis of Christian experience.

There are two aspects to this book which make the content stand out. One is the aforementioned meticulous care of Hackett’s argumentation. In this day books which are the culmination of decades of work are rare. The other distinctive is in Hackett’s true expertise in Eastern thought which he brings to bear skilfully without flaunting it.

This book, like a summa, is not easy to read. Running summaries in the margins are very helpful, but do not take the place of engaging the text itself. The most suitable audience would be readers from a seminary level up, and it is as a text in a seminary apologetics course that the book is probably most helpful. Nonetheless, anyone serious about careful apologetics ought to work through it. Perhaps even, evangelicals can for once see beyond their preoccupation with the presuppositionalist-evidentialist debate and applaud the solid contribution Hackett has made here.