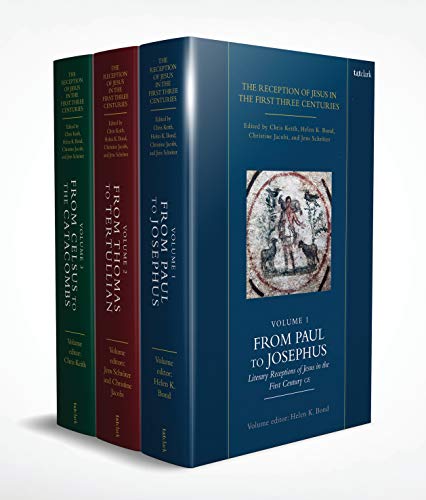 The Reception of Jesus in the First Three Centuries

The publication of this three-volume set is an indisputable feat of scholarship. The aim of the editors is simple yet stunning: to describe and discuss the myriad of sources from the first three centuries––canonical and non-canonical, literary and visual, Christian and non-Christian––that preserve and present the influence of the person and/or work of Jesus.

The scope of this project is hard to grasp––both figuratively and literally. To encompass the vast amount of material from this time frame, the editors assemble eighty-two contributions from recognized scholars around the world. Just to provide a small taste of the content, chapters address the individual books (or small sub-units) of the New Testament, the Apostolic Fathers (e.g., 1 Clement, the Didache, and Polycarp), apocryphal Gospels (e.g., the Gospel of Thomas and the Gospel of Peter), heretics (e.g., Marcion and Valentinian Gnosticism), the earliest Christian apologists (e.g., Justin, Irenaeus, Tertullian, and Origen), skeptics or opponents of Christianity (e.g., Pliny, Celsus, and Suetonius), pictorial representations (e.g., the cross symbol, the staurogram, and the fish symbol), liturgical rites (baptism and the Eucharist), and even ancient graffiti (e.g., the Alexamenos Graffito).

However, what makes this set unique is not simply its immensity but also its distinctive methodology. As implied by the title, the work as a whole approaches its subject from the vantage point of “reception history” (sometimes called Wirkungsgeschichte or “history of effect”). In an engaging introductory essay, the editors define the term: “[Reception history] emphasizes the impact of prior knowledge, understanding, and tradition upon a given interpreter, and thus sees any given interpretation of a text as a product of a mixture of what the interpreter has inherited from the past and the present circumstances from which he or she receives that past” (1:xv; emphasis original).

Put another way, the toppling of a domino can start a chain reaction, causing other dominoes to fall as well. While the tools of historical criticism have traditionally isolated and examined the initial domino––i.e., individual bits of tradition––reception history carefully observes the cascade effect, noting how dominoes impact one other and the intricate patterns that result. In this case, the initial domino is Jesus of Nazareth, while the cascade effect is the vast array of literary and non-literary representations stemming from his ministry, death, and resurrection. The editors thus distinguish their project from yet another quest for the historical Jesus. Their goal is the inverse of Jesus’s questions to his disciples in Mark 8:27–29. Rather than answering, “Who do you say that I am?” they focus their attention on Jesus’s first question: “Who do people say that I am?”

The chapters are arranged roughly in chronological order across each volume, and each chapter is relatively easy to follow due to the use of a standard four-point format. Each chapter begins with an introduction addressing historical matters, followed by a description of how Jesus is distinctively represented in the particular source (the “portrayal of Jesus”). The author then moves to consider the “reception of Jesus,” analyzing how the source’s representation of Jesus reflects “the hermeneutical reshaping of inherited tradition” (1:xxv). Each chapter closes with a helpful concluding summary.

I cannot hope to canvas adequately a reference work of this magnitude within the confines of a short review. In what follows, I briefly summarize a sample chapter to illustrate the method, then I conclude with a short discussion of strengths and weaknesses of the set.

Chris Keith examines how Jesus is represented in the story of the woman caught in adultery (the pericope adulterae), usually found in English Bibles in John 7:53–8:11 (1:197–208). The text-critical “problem” of the pericope adulterae is well-known––the passage almost certainly was not original to John’s Gospel, but was added at a later date, probably because its portrayal of Jesus coheres so well with the testimony of the Gospels. As such, the story provides a fascinating glimpse into how some of the earliest readers of the Gospels perceived Jesus.

In the introductory section of his essay, Keith traces the history of the pericope adulterae in the manuscript tradition of the Gospels and in the writings of the church fathers. After establishing a relatively early timeframe (perhaps 150–250 CE) for the inclusion of the passage, Keith investigates the portrayal of Jesus in the details of the story itself and argues that “the Jewish leaders are challenging Jesus to challenge Moses” (1:201). Will Jesus minimize Moses by refuting the requirements of the Torah, or will he scuttle his status as “a friend of sinners”? Jesus’s response to this dilemma is intriguing. Rather than answering, he sits and writes in the dirt. Only then does he stand and respond that the person without sin should cast the first stone. Keith points out that there are probably literary allusions being made here to the instructions in Deuteronomy 13:9 and 17:7 to stone idolaters. “By means of such narrativization, all ancient Israel––its leaders and its people––symbolically stands ready to pummel the woman with stones” (1:201).

In the third section, Keith examines “the reception of Jesus”––how the author of the pericope adulterae takes prior Jesus traditions and reworks them. Keith notes the similarities between this story and other narratives, especially from the synoptic Gospels, that portray Jesus as being in a battle over interpretation of the Torah with the Jewish religious experts (1:202). Keith also points out that this story contains a link with other Johannine traditions, specifically John 7 and the question of Jesus’s literacy (1:204). Finally, Keith highlights a juxtaposition of rare Greek words in John 8:6 and 8:8, tracing their usage back to Exodus 32:15 and the giving of the Law on Sinai. Keith argues that the author intends for Jesus’s actions to be read “against the narrative background of Moses, God, and the Decalogue,” such that Jesus “stands in parallel to God the law-giver rather than Moses the law-receiver” (1:206–7). Keith concludes the chapter by gesturing toward the broader implications for our view of John’s earliest readers.

The strengths of this reference work are obvious. Within the covers of these tomes lies a vast, near-egregious wealth of historical and thematic data for the careful and discerning student. The chapters are written by top-notch scholars and contain (generally) up-to-date discussions of each source. What’s more, the methodology of reception history represents a refreshing change from the search for the historical Jesus based on somewhat arbitrary criteria of authenticity. Rather than trying to get behind the text to divine the truth from the presumably fictional additions of later ecclesiastical communities, the respective authors focus on the sources themselves (1:xix).

However, one problematic feature of this reference work should be mentioned as well: the unevenness of the chapters. This issue unfortunately seems to be endemic to large, edited works. Some chapters are stellar, such as that by Chris Keith above. Others, however, contain unhelpful or surprising interpretive decisions.

For example, Christine Jacobi’s discussion of the Pauline reception of Jesus continues to repeat the tired line that by the time of Paul the term “christ” had lost any special significance and was used simply as a name for Jesus (1:20). This conclusion completely overlooks the influential work of Matthew Novenson (Christ among the Messiahs: Christ Language in Paul and Messiah Language in Ancient Judaism [Oxford: Oxford University Press, 2012], esp. 64–97) in overcoming the deadlock over whether “christ” is a name or a title. Given that Novenson’s monograph is not new, its absence from her discussion is surprising.

Similarly, Sandra Huebenthal’s discussion of names and titles for Jesus in her chapter on the Gospel of Mark is disappointing, for she sees the titles ascribed to Jesus in the text as competitive portrayals of Jesus’s identity. As a result, one finds statements such as, “The way the narrator guides the audience through the text clearly indicates that while the Son of David-motif applied to Jesus might be a current tradition, it still is a mistaken concept” (1:57).

Lastly, Karl-Wilhelm Niebuhr’s chapter on James surprisingly denies that the letter contains any allusions to Jesus tradition, instead arguing that “the burden of proof is with those who assert that the author wanted to refer to the Jesus tradition at all” (1:273, emphasis original). Not only does this decision reject the overwhelming consensus of the interpretive tradition, but it has the additional effect of forcing Niebuhr to put all his reception-historical eggs in one basket. James’s conception of Jesus has to be pinned entirely on the description of Jesus found in James 1:1 (Niebuhr seems to follow Dale Allison in believing that the reference to Jesus in 2:1 is a later interpolation).

The problem of unevenness notwithstanding, this landmark set will serve students of the New Testament and early Christianity well for years to come.