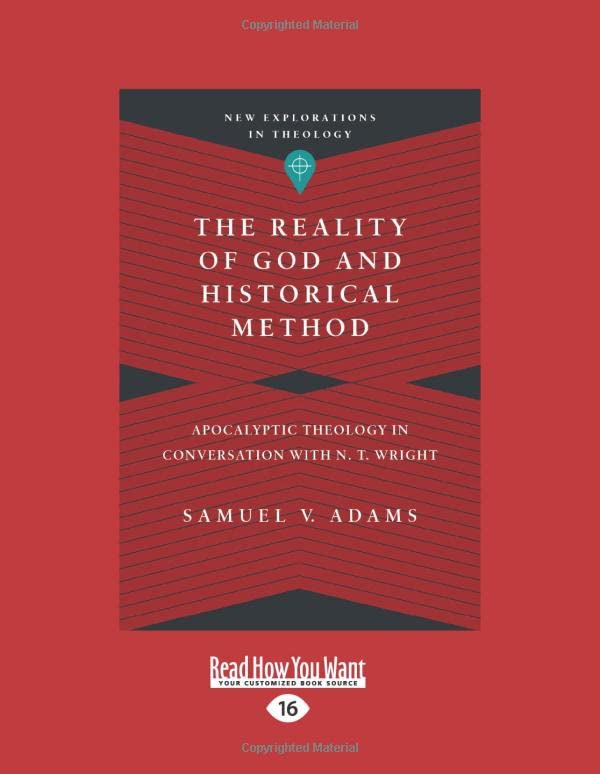 The Reality of God and Historical Method: Apocalyptic Theology in Conversation with N. T. Wright

The central claims articulated by the biblical authors concern a saving event within history, and yet since at least the late 18th century many have viewed history as an unstable foundation for theological claims. One of the many reasons N. T. Wright’s multi-volume “Christian Origins and the Question of God” has generated so much discussion and will probably be remembered as some of the most important NT scholarship of the late 20th/early 21st century is the result of his attempt to do theology through history. That is to say, Wright believes that the tools of the historian, properly used, enable us to move from historical questions and arguments to theological conclusions. There is, then, a methodological move from the general and historical to the particular and explicitly theological. Adams asks, however, whether Wright is justified methodologically in moving from history to theology. In particular, the volume is devoted to the following question: “What does the reality of God mean for historical knowledge?” (p. 17).

In ch. 1 (“History and Theology According to the Historian”), Adams examines Wright’s theological and historical method as programmatically set forth in Wright’s The New Testament and the People of God (NTPG) and executed with respect to the quest for the historical Jesus in Jesus and the Victory of God (JVG). Wright’s entire project is predicated upon the belief that Christianity and its faith commitments are built upon the reality of actual historical events. Wright has concerns, then, with doctrinal commitments that are abstracted from first-century historical events as well as with the twin poles of Enlightenment skepticism and idealism. Wright instead advances a version of critical realist epistemology that seeks to account for real contact between the observer and the thing observed without denying the limitations and biases of the historian. This highlights for Wright the importance of paying attention to worldviews, both our own and that of Scripture in order to see that “all human knowing is caught up in ways of seeing” and that this enables theology to avoid “the twin dangers inherent in an idealist abstraction that would lead away from the concrete reality of God’s involvement with history” (p. 63).

But this, then, raises the question that drives Adams’ examination of Wright’s method: in what way does the reality of God, who is the object of our historical knowledge, “impinge upon and even determine the way in which he is known? (p. 64). In ch. 2 (“Theology According to the Theologians”) Adams suggests that one needs to reverse the order of Wright’s method and first present an epistemology that is determined by the reality of God and only then examine the meaning of history based upon the material content of revelation. Wright’s version of critical realism is only committed to a metaphysics of “external reality,” but given that the believing historian begins his or her investigation within “a knowing relationship to the God under question” (p. 74) this ontological reality must dictate the historian’s research. Thus, Adams argues that Wright’s method “ought to begin with a theological epistemology determined by the object of knowledge” (p. 76). In conversation with T. F. Torrance and Søren Kierkegaard, Adams attempts to establish an epistemology that replaces Wright’s vague external reality with “the actuality of the knowing relationship” between God and the historian as “the starting point for knowledge, especially the knowledge of God” (p. 105).

Chapters 3 (“Apocalyptic, Continuity and Discontinuity”) and 4 (“Christology and Creation”) seek to extend Adams’ articulation of an epistemology determined by the objectivity and reality of God through arguing “that an apocalyptic theology is a truly theological commitment to the reality of God for theology” (p. 109). Adams is emphatic, along with Wright, that we do indeed know Jesus through history, culture, language, and worldview. But history and worldview cannot “provide the context for understanding Jesus apart from the positive act of God unveiling himself and providing the condition of reconciled subjectivity to see and to know that unveiling” (p. 119). Revelation is not antithetical to worldview and/or history, but it is epistemologically prior and determinative. The historian or theologian is the one who, along with her worldviews, is contextualized by the irruptive apocalypse of Jesus Christ. In Pauline soteriological terms, “the solution that comes with the Messiah Jesus reinterprets and recontextualizes what Paul had originally thought the plight was in the first place. The problem is learned in light of the solution” (p. 121). The apocalyptic revelation of Jesus Christ, in short, demands that the believing historian and/or theologian start with the irruptive apocalypse of Jesus Christ with respect to history, epistemology, hermeneutics, and theology (p. 140). Adams is quick to emphasize that this does not mean an overturning of the theological significance of creation and Israel, for God’s “electing grace is clearly seen in the covenants he has made with his people” and the grace is seen in “God’s resolve to love and to redeem, out of which we learn that he has created the world and everything in it” (p. 171). But the meaning of creation and God’s election of Israel is only rightly understood from within and not apart from God’s revelation in Christ.

In ch. 5 (“History According to the Theologians”) Adams argues that a theology of history must be committed to theological continuity due to the continuing presence of God with his people. There simply is no ugly ditch or gap for the apocalyptic theologian. The reality of God means that “the meaning of history be placed in the hands of the one who gives history meaning and who remains, in his freedom, determinative of that meaning. This is apocalyptic” (p. 183). Since Jesus is the norm for history, this means that Jesus is not determined by the history of Israel but rather determines Israel’s history (p. 200). But what does all of this have to do with the believing historian? Adams offers three theses as a theological corrective to Wright’s method. First, Adams suggests that limiting theology to worldviews is a form of methodological naturalism. To be clear, Wright is clearly not committed to metaphysical naturalism, but the limitations he has placed on his historical work mean his method does not escape a naturalistic frame even when discussing the event of Jesus the Messiah’s arrival. Said another way, “Theological knowledge is not grounded in the nature of knowledge in the created world, but rather in the reconciling act of God toward that order” (p. 217). Second, Christian theology is determinative for historiography. Third, theological historiography must be shaped by the cross as the hermeneutical center (not Israel or any other worldview). Finally, in ch. 7 (“An Apocalyptic Reappraisal of Apocalyptic”) Adams seeks to show how Wright’s historical method limits his ability to “consider the claims of apocalyptic theologians, particularly the reality and freedom of God and what this means for historical and theological knowledge” (p. 231). Wright can only understand Paul to be an apocalyptic thinker in terms of his inhabiting a particular Jewish worldview and thereby subordinates Paul’s apocalyptic thinking to God’s linear and prospective context of God’s covenants with Israel. And this results in Wright seeing an incredible amount of continuity between the history of Israel and Paul’s theology. And if “history provides the interpretive matrix, then the actual impact of the irruption of God is minimized, even if acknowledged” (p. 238).

Adams’s volume makes an important methodological contribution to the relationship between faith and history, and its critical evaluation of the work of one of the premier believing historians and theologians of this generation is a treat for those who would seek to understand the methodological contributions of Wright to NT research. I confess to being of two minds about Adams’s criticism of Wright or, stated differently by Adams, his attempts to correct and further Wright’s historical methodology. While I have benefited from Wright’s consistent attempts to situate Jesus and Paul within a first-century Jewish worldview, this so-called “worldview” can take on a life of its own in controlling what Jesus and Paul must be saying or must be about. A particular construal of the history of Israel, accessible only to the historian, is thereby often granted an inordinate amount of determinative weight that at times restricts and limits the claims of the biblical texts. That this is not only historically problematic but also theologically disconcerting, I grant to Adams. And while I affirm Adams’s claims that the revelation of God must determine the theologian’s epistemology, I am not sure what it would look like for a believing historian to actually do responsible history from the explicit standpoint of the Christ-event. Would this still be history in any recognizable sense of the word? Here Adams almost certainly would have benefited from engagement with Murray Rae (History and Hermeneutics [London: Bloomsbury T&T Clark, 2006]), who affirms that the reality of God determines how God is known but gives a stronger place to history as the arena whereby God reveals himself.