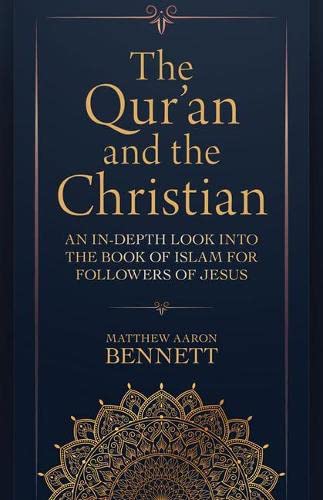 The Quran and the Christian: An In-Depth Look into the Book of Islam for Followers of Jesus

Christians and Muslims, if grouped together, comprise the majority of the global population. Approximately 55% of the world’s inhabitants belong to one of these two great faiths, which, not surprisingly, are missionary religions. Endless interfaith possibilities and permutations exist in the areas of theology, missiology, and geo-politics.

How should a believer of one religion understand the holy book of another? The orthodox Islamic doctrine of Tahrif claims that the Bible has been corrupted. On the other hand, how should Bible-believing Christians view the Qur’an? And should these views be held internally, or could they be articulated publicly among Muslim friends and neighbors?

Matthew Bennett provides a great service in responding to these challenges with The Qur’an and the Christian. Bennett articulates his plan to address the Qur’an: “In this book I intend to walk the line between presenting my understanding of my Muslim friends and their beliefs in ways that they would recognize as accurate while also being clear to demonstrate where their claims and beliefs diverge from biblical teaching” (p. 9). In that same paragraph, Bennett states his opening position that salvation is in Jesus Christ alone.

This positive beginning manifests in a well-ordered exploration of the Qur’an. The book is organized into three parts: (1)The Qur’an as Revelation, (2) The Qur’an as a Text, and (3) The Qur’an and the Christian. Considering the wide variety of topics, Bennett hones his treatment into a concise 250 pages.

Compared to the Bible, the Qur’an generally lacks narrative statements. Further, the Qur’an does not present itself in chronological order. In fact, the earlier material comes at the end of the book. For these reasons, readers of the Qur’an may find their experience perplexing. And for these reasons, Bennett renders a useful service to interested Christians.

The study of Christianity and Islam produces significant thematic overlap and shared terms and names, such as Abraham, Jesus, the Virgin Mary, John the Baptist, and the Day of Judgment. Comparative religious studies tend to emphasize either theological convergence or theological divergence. Bennett provides clarity to this subject as he concludes, “the teaching of the Qur’an cannot be reconciled with the biblical Gospel without doing violence to both” (p. 13). Such an assessment is frank and fair; orthodox Muslims would agree with Bennett here, and conservative Christians should as well. In another place, Bennett notes that the Qur’an presents a mosaic of biblical references and personalities, but that it is a “subversive mosaic” (p. 140) which undermines the biblical metanarrative. Throughout the book, Bennett maintains a charitable tone, without backing away from his missional emphasis.

Bennett frequently provides the Arabic words which English Qur’anic translations are based upon. This proves helpful, not so much because of the Islamic doctrine that the Qur’an is untranslatable and must be read in Arabic, but because some Muslim translators have at times massaged their translations to render them more appealing to Western readers. Thus, for a project such as Bennett’s, it would be expected and required to both provide and explain the Arabic source words under study. Bennett does not clearly state which English translation of the Qur’an he is quoting, though he frequently cites notes from A. J. Droge’s The Qur’an: A New Annotated Translation (Bristol, CT: Equinox, 2015). Throughout this work, Bennett exhibits a clear mastery of his subject, excellent interaction with Muslim and non-Muslim commentators, and reliable interpretations for his Christian audience.

Qur’anic studies, as a subsection of studies on the origins of Islam, have experienced a seismic shift in recent decades. Bennett wisely engages with the revisionist thoughts of John Wansbrough, who notably suggested the early Islamic history is unreliable, as well as Mark Durie’s more recent The Qur’an and Its Biblical Reflexes (Lanham, MD: Lexington). One recent contribution to this emerging field not mentioned by Bennett is Daniel Brubaker’s Corrections in Early Qurʾān Manuscripts (Lovettsville: Think and Tell, 2019). Brubaker’s research into the Qur’anic manuscripts contradicts the standard Islamic narrative by contending that the Qur’an was continually edited over centuries until it arrived at its modern format. One other area which Bennett does not explore is the “Qur’an as Poetry,” which explains much of its allure for Muslims.

Bennett’s finest work appears in the concluding section of the book. Therein, he evaluates one of the thorniest issues in modern missiology—the intentional utilization of the Qur’an in Christian witness. With poignant reasoning, Bennett explains why trendy missiological initiatives, such as “The Camel Method,” “Muslim-idiom Bible translations,” and “insider movements” tend to do more harm than good in presenting the Gospel to Muslim peoples. Bennett concludes regarding these new Western missional experiments:

They all include an optimistic view of the Qur’an as a natural tie-in to the biblical testimony. As the previous chapters have demonstrated, however, the Qur’an’s history, internal claims, and traditional interpretations fight against such a positive view of its message. As it has been received throughout the last 1,400 years, most Muslims view the Qur’an as a corrective of the biblical material rather than a supplement to it. (p. 226)

Bennett’s assessment is spot on, and he is fast becoming a leading, trusted source of information related to Islam and Muslims. Christians who appreciate a theologically robust read will find The Qur’an and the Christian well worth their while.

Fred Farrokh is a Muslim-background Christian who currently serves as an International Trainer with Global Initiative: Reaching Muslim Peoples.