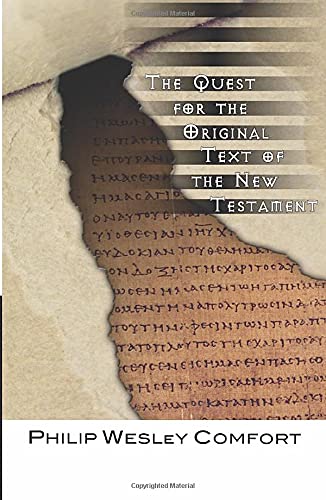 The Quest for the Original Text of the New Testament

One of the shortcomings of textual critics is that they have allowed their discipline to be misperceived as dry, dusty and dull. Comfort enthusiastically combats that misperception in this book. Drawing on a lively historical imagination, he successfully conveys the point that there were real people in living churches who, in the face of persecution and even death, faithfully passed on the text of the Scriptures, and to whom the church at large owes an inestimable debt.

The focus of the book is on the earliest surviving papyrus manuscripts of the NT. The author seems to have two goals throughout the book: to tell the story of the earliest MSS and the people and communities behind them (chs. 1–2, 5–7), and to present, on the basis of the early papyri, an alternative methodology to challenge the dominant approach to NT textual criticism (chs. 3–4, 8–10). This is an ambitious and commendable agenda, but in the end, perhaps it is too ambitious for a book of this size. Overall, he is much more successful with the first goal than the second.

With regard to that first goal, Comfort focuses primarily on Egypt, because that is the region for which we have the most evidence. But that is not to say that there is a lot of evidence, and it is on this point that the lively sense of imagination that is the book’s strength becomes also one of its weaknesses. While utilizing what evidence there is, too often the reconstruction builds on assumption and assertion rather than on data. An example: the statement is made repeatedly that very accurate early copies are evidence of scribes who copied with ‘reverential fidelity’ because they knew they were copying a sacred text. This is possible, but there is no evidence to support this romanticized portrait; an accurate copy could also have been produced by a professional pagan scribe with a strong sense of pride in his work who gave not a fig about the content of the document he was copying. An accurate copy tells us something about the skill of a scribe, but nothing about his attitude. In sum, the story of the early text is always interesting, but not always well grounded.

With regard to the second goal, the author is less successful. The issues he raises are important and substantial, but the popular level and brevity of the book severely handicap the discussion of them. For example, in chapter 8 his graphical presentation of textual relationships sometimes involves a substantial revision of current views, but no evidence is given to support his analyses (which in some cases are simply wrong: the analysis of Mark, for example, overlooks the fundamental work of Hurtado on p 45 and W).

With respect to his text-critical method, note that a key point rests upon an assumption. A major concern behind his ‘documentary’ approach seems to be the avoidance of the subjectivism he thinks is inherent in the ‘eclectic’ approach widely followed today, which in his view is characterized by an over-reliance upon internal evidence. In contrast, his documentary approach would put more weight upon the evidence of the best MSS. But that only pushes the problem back one step, because the determination of the ‘best’ MS(S) is based almost entirely on internal considerations. To attempt to avoid subjectivism at this stage by equating ‘best’ with ‘earliest’, as he basically does, will not work either: (1) while age may be an indication of quality, it is no guarantee of it, and (2) his own study ‘shows that two manuscripts can exist side by side in the same locality at the same time and yet contain significantly different texts’ (italics added)—a point which severely relativizes the criterion of age. Thus he does not really escape the perceived problem. Moreover, he is inconsistent in applying his own method; in 1 Cor. 7:40, for example, he is willing to abandon the very earliest witnesses, including p 46, in favour of two later ones—largely on the basis of internal considerations! In the end, his preference to weight somewhat differently than others the balance between external and internal evidence should not obscure the fact that in practice Comfort utilizes, like almost all the rest of NT textual critics today, a reasoned eclecticism.