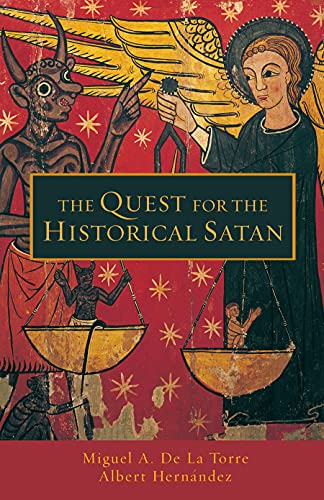 The Quest for the Historical Satan

This work is the result of collaboration betweentwo colleagues on the faculty of the Iliff School of Theology in Denver, a social ethicist (De La Torre) and a church historian (Hernández). They state that they wrote the book “to explore the problem of evil as historically and morally constructed by Christianity through the changing image and symbols of Satan” (p. 11). They believe that understanding Satan as the epitome of evil, in contrast with an absolutely good God, has had unfortunate consequences. It has resulted in Christians demonizing those who differ from them and claiming divine warrant for perpetrating all sorts of atrocities against them. De La Torre and Hernández propose that seeing Satan as a trickster, rather than the personification of absolute evil, may result in a more liberative ethic.

The first chapter looks at the way Satan is conceived today and surveys how he is represented in film, among those who identify themselves as Satanists, among those the authors label “Christian Fundamentalists” (e.g., Hal Lindsey), among Roman Catholics, by the authors of the Left Behind novels, and among Liberals. Given that Hal Lindsey promotes the dispensational eschatology assumed in the Left Behind books, it is unclear why the discussion of the novels is treated separately from the discussion of “Christian Fundamentalists.”

Chapter 2 overviews the way Satan is represented in the scriptures of Judaism, Christianity, and Islam and other related literature from antiquity. Curiously, it begins by discussing the Egyptian god Seth because, according to the authors, he was the god who represented evil in the Egyptian pantheon but was never understood as absolutely evil in the way Satan came to be. Next the authors summarize how Satan and evil spirits are represented in the Hebrew Bible. Here they endorse the widely held but debatable view that Judaism was deeply influenced by Zoroastrian conceptions of good and evilduring the exilic period. Turning to post-biblical Judaism, the authors discuss the demonology of the Apocrypha and Pseudepigrapha. Surprisingly only about seven pages are devoted to the NT teaching concerning Satan. This is followed by brief discussions of the figure of Satan in the early Church Fathers, Gnosticism, the Talmuds, and the Qur'an.

Chapter 3 examines how the Church Fathers related to the views of the spirit realm that they encountered in the Graeco-Roman culture around them. According to the authors, it was in this period that the position of Christianity vis-à-vis other religions hardened and that Christians increasingly identified the gods and goddesses of other religions as demonic. From this point, the authors contend, the gulf between absolute good and evil was so firmly fixed that there was no possibility of viewing Satan as a “trickster.”

Chapter 4 deals with how Satan was understood from Constantine to Colonial times. The authors claim that the ideas of Satan that emerged in the Middle Ages were shaped both by biblical teaching as reflected in the Church Fathers and ideas concerning the spirit realm found in the popular myths of the day. The discussion ranges from Charlemagne's policy of forced conversion, to the legends concerning King Arthur and Merlin, to the execution of “tens of thousands” of women as witches in the sixteenth and seventeenth centuries, to the Inquisition, and to the slaughter of native peoples as demon worshippers in the New World.

Chapter 5 opens with the statement, “Ontologically, there is no Satan” (p. 179). After noting how the presence of evil in the world might suggest that Satan exists and lamenting that our understanding of Satan can distort our understanding of God, the authors discuss the decline of belief in Satan, tracing its origin to the devastating earthquake that struck Lisbon in 1755. They propose that this tragic event prompted intense debate between Enlightenment thinkers and religious leaders. Oddly enough, as the skepticism of the Enlightenment thinkers gained ground, Satan received a new lease on life in the literary world with the publication of a number of versions of the Dr. Faustus legend. The authors suggest that the concept of Satan may need to be revived in our day in order to provide an adequate account of evil but that it must be stripped of its colonialist trappings. This leads to their proposal that Satan be reconceived as a trickster figure who is not perceived as absolutely evil but as an instrument used by God to confront people with moral choices and who does not necessarily have a malicious intent. They make the claim that this may take us back to the origins of the Satan figure, for they speculate that this could have been how he was originally conceived.

The greatest strength of this book is that it forces the reader to confront the terrible reality of the evil that has been done by those who believed that they were doing the will of God. Sadly, Christians have too often promoted violence against those they believed to be in league with Satan. This is an issue to which those of us who stand in the evangelical tradition need to be especially sensitive. The danger of demonizing “the Other” is real. De La Torre and Hernández have raised important questions that Christ followers need to wrestle with. Unfortunately, there are significant problems with the way they have presented the evidence, and their proposed solution fails to satisfy.

To begin with, it is disappointing that the treatment of the biblical teaching concerning Satan is so cursory. The authors devote much more attention to the putative precursors to the biblical conceptions concerning Satan and the reception history of the biblical material than to what the Bible says. Second, their treatment of historical issues is open to dispute at many points. One example of this is their account of medieval witchcraft, where they endorse such popular notions as the view that witchcraft originated from pre-Christian paganism and that it was usually women who were traditional healers who were accused of witchcraft by church leaders. Works like Ronald Hutton's The Triumph of the Moon: A History of Modern Pagan Witchcraft have raised serious questions about the legitimacy of this sort of historical reconstruction. Third, De La Torre and Hernández are selective in the evidence they present and ignore evidence that does not support their thesis. For instance, they refer to the slaughter of Indians by Puritans in the Colonial period but do not mention that Roger Williams championed liberty of conscience and held Native Americans in high esteem or that David Brainerd and others like him labored strenuously to bring the benefits of the gospel to them.

The authors do not make a convincing case for their thesis that Satan should be reconceived as a trickster figure. They rely primarily on the representation of Satan in the prologue of Job, the temptation of Jesus, and the testing of Peter and Judas. These narratives clearly teach that God uses Satan as an instrument to accomplish his purposes but provide slim support for the trickster hypothesis.

The book includes a ten-page bibliography, but what is most striking about it is what is missing. None of the works on Satan and demonology by James Kallas, Neil Forsyth, Everett Ferguson, Susan R. Garrett, Graham Twelftree, or Jeffrey Burton Russell are included. Given the focus on the history of conceptions of Satan, the omission of any of Russell's books is especially surprising.