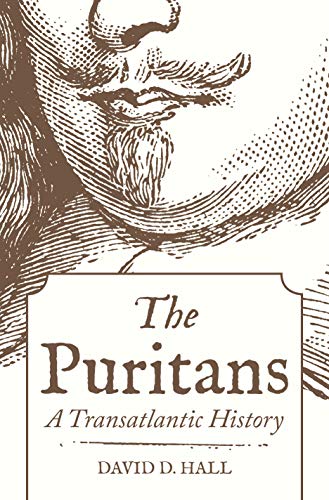 The Puritans: A Transatlantic History

In The Puritans: A Transatlantic History, David D. Hall tells the history of a quest for a “perfect reformation” in the British Isles and New England. Dissatisfied with the via media of the Elizabethan Settlement, the Puritans sought a more thorough and complete remodeling of church and society in accord with the Reformed international movement. Royal agendas and competing visions within Puritanism thwarted their hopes, yet their legacies deserve continued and careful deliberation.

Hall is professor emeritus of American religious history at Harvard Divinity School. He has arguably shaped the field of early American religious history more than any other scholar over the past half-century, contributing key studies in American Puritanism, popular religion, and print culture, among many others. The Puritans is a culmination of his work and achieves the unique breadth and erudition of a seasoned scholar. The endnotes alone are 136 pages. It is, however, no stagnant summation but a robust historiographical advancement.

Hall does not engineer this feat by reframing Puritanism according to today’s trendiest political and social agendas. He cautions against the ahistorical use of the term “puritan” to ridicule everything wrong with America. This applies on a broader level as well. For example, the Heidelberg scholar Jan Assmann’s 2018 Friedenspreis (peace-prize) winning work, Totale Religion: Ursprünge und Formen puritanischer Verschärfung (Wien: Picus Verlag, 2016), links puritanical religion with radical terrorism. As Hall reminds us with a sober historical perspective, modern social critiques of the Puritans can be applied to most sixteenth and seventeenth-century Europeans. Moreover, our “modern” values are not as irreproachable as we would like to think: “We may recognize that the price we pay for ‘modernity’ includes severe damage to the environment and ongoing inequality, but it seems impossible to jettison the assumption that things are better now than they were in the past” (p. 12). Rather than viewing the Puritans through modern standards, he takes a more unconventional approach by presenting the Puritans as they understood themselves—an approach that allows open minds to see ourselves and our own shortcomings through their eyes. Thus, Hall’s Puritans were not drab killjoys, disciplinarian misogynistic witch-hunters, subversive separatists, militant radicals, nor the progenitors of democracy, capitalism, or a uniquely “American” intellectual or literary tradition. They were Protestants in pursuit of true religion, and to this end, they sought to purify worship of idolatry and refashion politics for the flourishing of British society and its churches.

Wishing to overcome deeply-ingrained limitations in Puritan scholarship, Hall pursues “a more fully Atlantic or Reformed framework” (p. 10)—leading him to cast Puritanism as an extension of the wider Reformed international project in the contexts of Britain and New England. Building on works like Stephen Foster’s The Long Argument: English Puritanism and the Shaping of New England Culture, 1570−1700 (Chapel Hill: University of North Carolina Press, 1991), he situates New England Puritanism in a transatlantic perspective rather than isolating it as a unique “American” phenomenon. He goes further, however, by including Scotland as well as the important networks and exchanges of ideas with continental Protestants. Moreover, inspired by the scholarship of Richard A. Muller and evangelical historians like Mark E. Dever, Joel Beeke, J. I. Packer, and Paul C. H. Lim, he lends greater weight to theology. These works influence Hall’s book in critical ways. His treatment of Puritan practical divinity in chapter 4 is thorough and judicious. Seeing it as ultimately rooted in classic Reformed Protestantism, he foregrounds key intertwined themes: covenant theology, the ordo salutis, the ongoing relevance of the moral law, providentialism, predestination, the Spirit and the Word, devotional practices, assurance, ministry practices, and more. In his treatment in chapter nine on the controversies in New England surrounding Roger Williams, Anne Hutchinson, and the witchcraft trials, readers find less about the authoritarianism and sexism of the clergy (the focus of most treatments) and more about the sincere pastoral concerns that drove their actions.

In contrast to some of these evangelical writers, Hall places greater emphasis on Puritanism as a political movement. Here again, the Puritans followed Reformed models on the Continent in their assumption that the powers of the civil state ultimately existed to serve the interests of true religion. However, unlike reform projects in Geneva, Zürich, Basel, Strasbourg, Frankfurt, Heidelberg, the Netherlands, and elsewhere, the interests of the English and Scottish royalty never fully aligned with Puritan ideals. This conflict culminated in what Hall titles his eighth chapter, “The End of the Beginning, 1640−1660.” In an ironic twist, the political developments that brought about the height of the Puritan movement also resulted in its end. After winning the Civil War and beheading King Charles I, Puritans finally gained the opportunity to reform British politics in favor of the reformation agenda they had pursued since the 1570s. As late as 1646−1647, the Presbyterian-led Westminster Assembly seemed on the brink of forging a lasting and comprehensive Puritan state church. Yet their designs for a Puritan Christendom fell apart in the 1650s, due to a mixture of Oliver Cromwell’s leadership as Lord Protector, the rise of groups like the Independents and Baptists who held opposing views on church governance and the state, and the growing push for voluntary religion, freedom of conscience, and toleration. With Cromwell’s death in 1658 and rising agitation over disunity, Parliament restored the monarchy in 1660−1662, re-imposed the episcopal system, and ousted all dissenters with the Act of Uniformity (1662). While the Puritan movement to reform the Church of England was over, their legacies have shaped religion and society in significant ways up to the present day—a matter Hall explores in his Epilogue.

Unlike the many rampant misrepresentations out there, The Puritans: A Transatlantic History does not leave readers with the same self-congratulatory relief for our age’s progressive liberation from all things “puritanical.” Instead, we are confronted with what we have sacrificed for our “modern” ways: rich spirituality and doctrinal depth for sentimentalism, social ethics for self-interest, communal solidarity for individualism, teleology for utilitarianism, Sabbaths for consumeristic leisure.