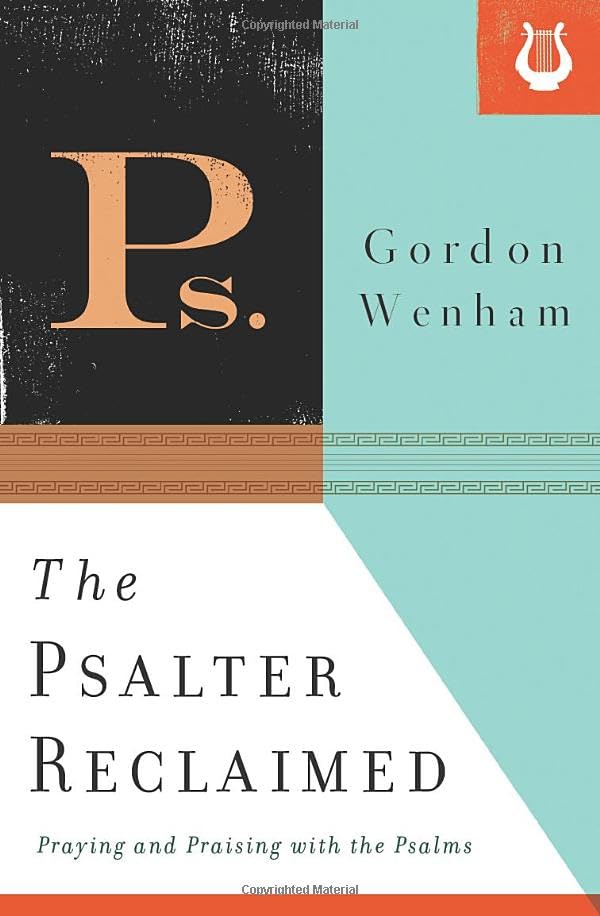 The Psalter Reclaimed: Praying and Praising with the Psalms

In this collection of essays Gordon Wenham continues to publish his work on the Psalter. Although many of the essays are available elsewhere, some were previously unpublished. This collection stands out as a digest of recent psalms scholarship originally delivered as presentations to audiences in diverse contexts from Tyndale Fellowship in Cambridge to Scotland, Rome, and Nairobi, Kenya.

The first chapter (“What Are We Doing Singing the Psalms?”) explores the Psalter from the perspective of speech act theory. Originally published in Irish Biblical Studies (2010), this essay provides a brief overview of how the psalms have been used through history, starting with Chronicles and covering the Dead Sea Scrolls, the early church (including Athanasius), and the Reformation. Wenham argues that the Psalter would have originally been a collection to be memorized since ordinary ancient Israelites would not have had access to their own written copies of the Bible. As poems memorized and used for worship and prayer, the psalms not only teach us but also commit us to certain attitudes and beliefs. From a theoretical perspective, this should be the case; but we may also wonder whether we should speak of the effect of prayed psalms with more reserve, recognizing that people often pray something without total commitment to the content of their prayers.

The second essay on “Praying the Psalms” is the most accessible. Originally presented in Nairobi, Kenya, this essay provides reasons why Christians should pray the psalms regularly. He begins once again by tracing the history of this practice from ancient Israelite priests and Levites to Jesus and the church through the ages. He summarizes the various kinds of psalms, including praise psalms, lament psalms, penitential psalms, and messianic psalms. On the lament psalms Wenham tackles the practical question of how lament psalms can and should have a place in the prayer life of Christians and churches. In this valuable essay Wenham has distilled some wonderful pastoral advice that both students and lay readers will find edifying.

“Reading the Psalms Canonically” is a reprint of an essay from Canon in Biblical Interpretation (Paternoster, 2006). It summarizes the change in psalms study initiated by Gerald Wilson’s seminal work, The Editing of the Hebrew Psalter (Scholars Press, 1985). In addition to summarizing Wilson, Wenham discusses R. N. Whybray’s critique of the canonical approach to the Psalter, tackles the question of the psalm titles, and summarizes the approach of Frank-Lothar Hossfeld and Erich Zenger in their commentary on Psalms 51–100, which has been translated into English (Augsburg, 2005).

“Reading the Psalms Messianically” challenges the critical rejection of many psalms as messianic. Wenham reviews the history of interpretation up to the point messianic readings went “on the retreat” in the nineteenth century. He rescues messianic readings by noting that the very canonical shape of the Psalter drives us to envision a future victorious reign of God’s king. Davidic psalms later in the post-exilic collection in Book V suggests that the psalms are not simply artifacts of Israel’s past experience but embody its future hope. In addition, Davidic psalms present both the ideal David (Pss 2, 72, 110) and the suffering David. These two pictures of David fit together well in the mission of Jesus. Although many psalms may not have been understood originally as messianic prophecies, that does not mean that a historical interpretation is the last word.

“The Ethics of the Psalms” is a reprint from Wenham’s essay in Interpreting the Psalms (InterVarsity, 2005), which itself was a precursor to Psalms as Torah. Wenham offers an initial foray into the ethics of the Psalms by identifying material that relates to the Decalogue and summarizing the Psalter’s presentation of the righteous and the wicked, the imitation of God, and steadfast love (hesed). Wenham rightly notes the priority of the righteous/wicked dichotomy as the Psalter’s approach to ethics, but rather than make that primary he begins with the Decalogue. Had he begun the other way around, perhaps “the abundance of passages” on misuse of the tongue (p. 115) would have fit more easily.

Wenham’s essay on “The Imprecatory Psalms” was not previously published. Wenham admits to presenting nothing original but rather summarizing classic evangelical responses to these psalms and tracing some recent Catholic and mainline Presbyterian responses. As a digest of views on these psalms, the essay is valuable for students and pastors. However, we may wish that Wenham had offered a summary of his own view in light of his encouragement to pray the psalms in his second essay and his discussion of the Psalms as commissive speech acts in the first. Should we pray these psalms, and to what does this commit us?

The last two essays provide examples of working with the psalms. “Psalm 103: The Song of Steadfast Love” models exposition of a particular psalm in light of the Psalter. This psalm celebrates God’s steadfast love following the question in Psalm 89 about God’s steadfast love for David and in advance of Psalms 104–106, which describe Israel’s exile-inducing sins. As such it provides hope for Jews in exile (and for sinful believers today). “The Nations in the Psalms” completes the collection of essays but sits less easily in the book. It offers a thematic summary of the nations in the Psalter, starting in Book I by treating the theme in canonical sequence. However, mid-way through Book I, Wenham speeds up considerably on his way to Ps 148 without providing a thematic framework.

Thanks are due to Crossway for publishing this volume. Although not all of the essays are equally stimulating, much of the book would serve well as supplementary reading for an English Bible course on the Psalms or as a book for discussion in a church setting.