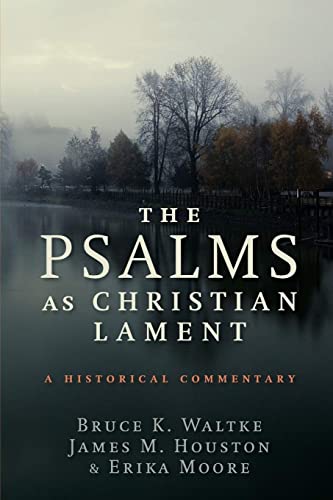 The Psalms as Christian Lament: A Historical Commentary

The book begins with a prologue and an introduction to the lament psalms. The rest of the book has ten chapters, each treating a lament psalm. The authors do not treat all the lament psalms, which, according to Hermann Gunkel’s famous classification of the Psalms, make up almost a third of the Psalter; neither do they aim to offer a complete theology of lament. Rather, in this volume, they focus on Psalms 5, 7, 39, 44 and six of the seven penitential psalms (i.e., Pss 6, 32, 38, 102, 130, 143). The seventh penitential psalm, Psalm 51, is covered in their first volume (The Psalms as Christian Worship: A Historical Commentary [Grand Rapids: Eerdmans, 2010], 446–83).

Each chapter has four sections. In part one, Houston focuses on selected commentators from church history, summarizing the historical interpreter’s life before relaying their interpretation of the particular psalm. The length of these sections varies from chapter to chapter, depending on that psalm’s prominence in history. For example, Houston only treats Jerome’s interpretation for Psalm 5, but for Psalm 7 he reviews the interpretations of John Chrysostom, Charlemagne (c. 742–812), Alcuin (735–804), and Alfred the Great (c. 849–899).

In part two, Waltke gives a translation of each psalm with plenty of footnotes explaining key syntactical, grammatical, textual, and translational issues. He translates the Hebrew יהוה as “I AM,” a translation no mainstream English Bible follows. Also unlike most other English Bibles and Psalms commentators (e.g., Hans-Joachim Kraus, John Goldingay, Peter Craigie, and Gerald Wilson), Waltke often views as postscripts of the preceding psalm part of what most understand to be superscripts. For example, on Psalm 5 he regards the phrase, “For the director of music. For flutes.” (Ps 5:1a) as a postscript for Psalm 4 (p. 23) but views “A Psalm of David” (Ps 5:1b) as the superscript to Psalm 5. As a result, his analysis of Psalm 5 does not treat Ps 5:1a.

In part three, Waltke gives an exegetical examination of each psalm. Waltke shows his appreciation of the organization of the Psalter by examining each psalm in its immediate literary context. He analyzes the structure of each psalm, gives a synopsis of its message, followed by exegetical comments, often making biblical-theological connections in the process. For example, alongside his exegesis he makes the following biblical-theological link about the house of the Lord: “Within the developing canon, to the house was interpreted from David’s tent sanctuary to Solomon’s temple and finally to the church triumphant, secure in the bosom of the resurrected Christ” (p. 36, italics original).

In part four, Waltke and Moore summarize the results of the exegetical section and draw out Christo-centric implications, especially of the Davidic psalms. The authors trace insightful typological links between David and Christ. For instance, when he concludes the discussion of Psalm 6, a psalm that highlights God’s merciful response to David’s fervent plea, Waltke depicts David as both a type and antitype of Christ. He makes the following observation (pp. 69–70):

Both David and the Lord Jesus Christ suffered under God’s wrath; both humbly accepted God’s discipline; both were in anguish at the prospect of death and separation from God; both prayed earnestly to be delivered; both committed themselves to God alone; both tasted the grave; both reckoned by the malicious and malignant enemies as under a curse; both were heard by God when they prayed; both rose victorious from the sphere of death; and in so doing routed their enemies; both praised God for their salvation, discomforting the damned and comforting the faithful. But the Antitype is so much greater than the type: David suffered justly for his son, our Lord suffered justly for our sins, not for his own, and because he himself was without sin satisfied God’s wrath against sin and removed sin and its wages from all who trust him. David was slipping away into the grave, but our Lord was buried in the grave and descended into Hades. David was delivered from a premature death but eventually died a normal death in his old age; Christ rose from the dead and lives forever. This is the story the church gives to the terrified sick and dying: We tell our “old, old story,” or we literally have nothing to tell. Until our Lord’s return all the elect must clinically die, but David’s psalm will always assure them that the God of life, and not death, will have the last word in their narrative. And if the type gives us that assurance, how much more will the Antitype?

This kind of Christo-centric typology characterizes all the chapters of this volume.

As rich as this work is in its various insights, it would have been richer, in my estimation, if the authors had crafted the exegetical section in light of the church-history section. The lack of attempt to integrate the historical and exegetical sections made the commentary somewhat disjointed. It would also have been helpful if the exegetical sections had evaluated the history of interpretation, but this task is left to the reader. Nevertheless, this book helpfully portrays lament as normative in early Christian devotion, and advocates the recovery of lament in the church today (p. 7). I recommend this volume to anyone who is seeking to recover the place of lament in the Christian life.