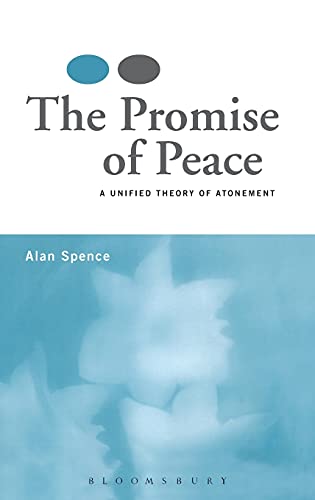 The Promise of Peace: A Unified Theory of Atonement

Alan Spence, a minister of the United Reformed Church in London, has produced an important book on the doctrine of the atonement. This short book is clearly argued and contains commentary on biblical texts, historical overviews, and sound theological reasoning. Spence critically and graciously engages various ideas and thinkers and is not afraid to go against the consensus if he believes that it is warranted by Scripture.

Two major arguments run throughout the course of the book. First, Spence defends a mediatorial model as a “master-story” that provides a coherent relationship between the various soteriological metaphors found in scripture. In Spence’s model, humanity is alienated from God because of sin and remains under his judgment. Jesus makes peace through the cross on our behalf with God the Father, reconciling God and humanity and calling the hearer to repent, trust and believe. Second, justification acts as “the interpretive scheme within which other redemptive themes play a part” (p. 67) and is the “solution to … our fundamental plight” (p. 61).

In chapter 1, Spence begins developing his unified theory by outlining what he believes are the three main soteriological types: Jesus as victor, mediator, and exemplar. Each option is a competing theory of salvation, thus making each mutually exclusive. Spence illustrates this point by contrasting N. T. Wright’s victory model to his mediatorial theory. He concludes that victory-language in scripture does not warrant a victory-model like Wright’s and that his mediatorial theory is able to include such metaphors.

Chapter 2 evaluates aspects of modern soteriology, interacting with Forsyth, Barth, Kähler, and others. What is missing, in most accounts, is an allowance for the significance or reality of Jesus’ human action, and this unfortunate result is due to an inadequate doctrine of the Spirit in Jesus’ life. Christology and pneumatology must be brought together. For Spence, Jesus’ action as man on our behalf is both biblical and in line with classical Christian thought.

Next, Spence seeks to bring together in chapter 3 the seemingly different accounts of “the Father’s loving gift to the world of his Son and Jesus’ self-offering to God on our behalf” (p. 39). Through an exploration of the intercessory prayer-life of the ascended Christ and its relationship to Jesus’ death and resurrection, Spence asserts that God is the primary and formal cause of reconciliation and salvation whereas Jesus’ self-offering is the material cause of the atonement.

The focus of chapter 4 is justification, which “provides the framework for a unified theory of atonement in which Christ’s saving ministry is recognized as mediating our peace with God” (p. 67). Justification is the solution to humanity’s predicament which Spence defines as guilt, sin, and estrangement from God. Spence further argues that Paul’s theology brings together justification, redemption and propitiation and that the three are “mutually dependent” and ultimately form “not three theories of atonement but one” (p. 66).

Chapters 5–6 focus on the nature of faith in salvation, which is closely tied to the biblical understanding of promise. Faith consists of three principles. It is “a gift of God,” an “appropriate human response to the gospel,” and that which “looks away from itself and towards God alone for salvation” (p. 75). This is in contrast to T. F. Torrance’s view, which “argues that everything required for salvation has already been accomplished by Christ” (p. 79). In response, Spence claims that men and women must genuinely trust in the divine promise—the promise of God’s Son for us and his Spirit to us—and the transformation it brings.

In chapter 7 Spence finds inherent problems in Barth’s relation of human faith and divine declaration. Barth argues that everyone is justified whether they realize it or not. Thus, faith is a matter of the assurance of what one already possesses. This isolates justification from incorporation into the death of Jesus and does not do justice to Scripture, which speaks of salvation being worked out in the believer’s life through the power of the Holy Spirit. Spence even goes so far as to call Barth’s view “false and dangerous” (p. 106). Spence ends the chapter with a critique of Wright’s view of the covenant, gospel, and atonement, insisting that while the lordship of Christ is the gospel’s presupposition, “it is, of itself, not the gospel” (p. 114).

At the end of the book, Spence offers a shorthand statement summarizing the various aspects of the overall narrative in trinitarian form: “The Father gave his only Son to become as we are so that, in offering up himself on our behalf through the Spirit, he might reconcile us to God” (p. 118). Spence admits that his book is ultimately an extended and unfinished commentary on the quote with much that still needs to be said.

An unfortunate and inevitable weakness of this book is its brevity. Spence covers a lot of ground in very few pages and at times can leave the reader with unanswered questions. Furthermore, while Spence does not directly engage in the debates regarding penal substitution, I would have appreciated more attention to this biblical issue and would be interested in how his mediatorial theory would specifically incorporate penal substitution. Nevertheless, whether one agrees or not with Spence’s normative mediatorial model, this book is a welcome contribution to atonement literature. It is worthy of wide readership among scholars, students, and pastors who are looking for a clear and passionate defense of the gospel.