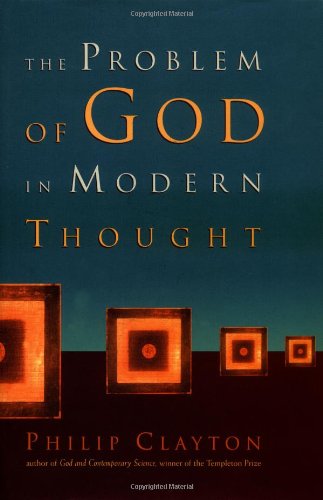 The Problem of God in Modern Thought

This is a challenging contribution to the contemporary debate about the existence and nature of God. It contains useful responses to the religious scepticism of post-Kantian philosophy, but delineates a panentheistic concept of God contrary to the Scriptural revelation of the triune God.

Professor Philip Clayton begins by arguing convincingly that language about God can be ‘constitutive’, that is, can ‘refer to an object and express actual positive content about it’ (5). This is in response to those who, after Kant have asked how language and ideas about God can be said to be anything other than hypothetical, since they are not, according to Kant, derived or based on human experience or anything in nature. They are simply concepts that may be posited as true, while practical reason and ethical living is carried out ‘as if’ they were true. To his credit, Clayton refutes the ‘epistemic dualism’ which led Kant to argue that all ‘data’ not gathered on the basis of empirical intuition (including claims about God) could not properly be called knowledge. Such a dualism (of sense impressions versus ideas of reason) is untenable, since it is not clear on the basis of empirical intuition that such a clear-cut division is appropriate (22).

Instead, Clayton argues that the concept of God can function as the telos of all rational enquiry, and Kant’s dualism should not determine in advance ‘which sorts of propositions are knowable and which are not’ (28). Such decisions can be made only on the way, and the concept of God provides a good and coherent means of directing the way.

In setting out his own theory, Clayton provides an impressive historico-philosophical study of modern philosophers, from Descartes (chs 2 and 3), to Leibniz (ch. 4), Kant (chs 5 and 6), Spinoza (ch. 7), Fichte (ch. 8), and Schelling (ch. 9). But it is Schelling’s panentheistic development of Spinoza’s pantheist philosophy that Clayton finds most convincing.

Arguing that the best model of God is as the ‘ground of being’, Clayton maintains that we are the ‘beings that stem from this ground’ (478). Opposing the traditional theistic view of God as an infinite being who has created finite beings who are not just quantitively but also qualitively different to him, the boundaries of this quality are less defined and more blurred. For Clayton, the ‘finite is included within (or participates in, or stands in a part/whole relation to) the infinite’ (479).

However, we wonder how the ontological integrity of the finite can be maintained if it is qualitatively related to the infinite. For the Christian, assorted problems arise. How does such a model of God cope with the moral disjunction that now exists between God and the world? If the world is included within God, where then is the moral distance if the finite is included within the infinite? Or is God in some way responsible for the moral failure of the world? The traditional view of theism maintains an ontological distinction as the basis for the moral distinction. Clayton’s model fails to do this, and shows itself to be inconsistent with the evidence of Scripture and the revelation of the triune God in Jesus Christ. This is, a stimulating, if difficult book.