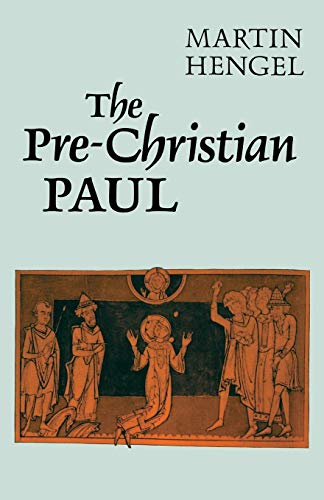 This book takes further and broadens Hengel’s interest in the period Between Jesus and Paul—the title of the earlier publication (1983) in which some earlier contributions to its study were collected. With all of these Hengel has put us much in his debt. His own aim is clear: he plans eventually to be able to produce a comprehensive historical and theological ‘geography’ of the early church, mapping the complex landscape of influences and reactions which gave it its distinctive shapes.

In this contribution to his wider goal he concentrates on Paul, proceeding from the presupposition that ‘knowledge of Saul the Jew is a precondition of understanding Paul the Christian’ (p. xiii). He then devotes chapters to ‘Origin and Citizenship’, ‘Upbringing and Education: Tarsus or Jerusalem?’, ‘Pharisaic Study of the Law in Judaism’, ‘Greek-speaking Jerusalem and Greek Synagogue Education’ (this chapter depends upon his foregoing conclusion, in part agreement with W.C. van Unnik, that the main formative stages of Paul’s education were undertaken in Jerusalem rather than in Tarsus), and Paul as ‘The Persecutor’. The study is thus historical rather than theological, but Hengel recognizes that this is a false distinction, and maintains that a study of Paul’s background will reveal ‘why his doctrine of justification was necessarily so fundamental to his later preaching as a missionary to the Gentiles’ (p. xii)—though he does not follow up this relevance within this book.

So Hengel does not specifically study Paul’s conversion here—he stays strictly with pre-Christian Paul. But implicitly he clearly wants to qualify a heavy emphasis on the Damascus Road as the chief theological content-forming occasion for Paul the Christian. He points to several ways in which Paul’s Jewish background and education shaped his Christianity, and concludes: ‘Its individual elements and thought-structure derive almost exclusively from Judaism’ (p. 86), even though his conversion also meant a ‘radical shift’.

This is a study, therefore, to place alongside W.D. Davies’ Paul and Rabbinic Judaism in the scholarly spectrum. This book provides the raw historical reconstruction on which a W.D. Davies-style portrait of Paul the theologian could rest. Each chapter is vintage Hengel: wide presentation of evidence from all sources, judicious discussion, readiness to draw conclusions, and conservative instincts (here, especially towards the reliability and indispensability of Acts).

The footnotes are an education in themselves: two pages on Roman administrative procedures relating to registering Roman citizens (n. 61); one-and-a-half on Rabbinic attitudes toward Damascus (n. 318); over two on the ancient sources and secondary literature relating to Tarsus; and much incidental discussion of the thorny problem of the nature of pre-70 ad Pharisaism.

So—it’s great stuff, essential for all who want to make a special study of Paul.