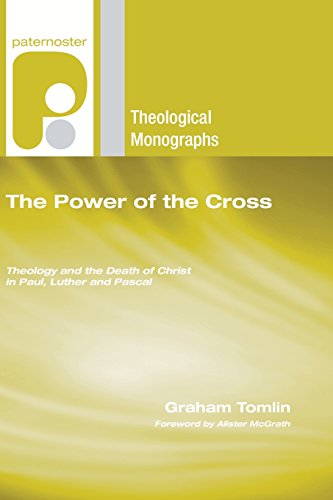 The Power of the Cross. Theology and the Death of Christ in Paul, Luther and Pascal

Once in a while you pick up a book and you cannot put it down. It captures your imagination and puts everything on hold. Inevitably, such tomes are of a literary genre, a popularist such as Susan Howatch or Steven Saylor or the hyped but equally readable Harry Potter. More rarely is such a tome theological. Therefore, it behoves the reader to mark the reviewer’s words well when he says, ‘I couldn’t put this down!’—and neither I could! Graham Tomlin’s, The Power of the Cross. Theology and the Death of Christ in Paul, Luther and Pascal is a worthy title in the Paternoster Biblical and Theological Monograph Series.

I must admit that I did not warm to the book: wasn’t this just another weighty and wordy PhD thesis best left to those few worthies interested in the subject? Definitely not! Tomlin takes a central and strategic element of the Christian faith—the cross—and shows how it has been understood by three key thinkers. This he does in two ways: firstly, he shows what the cross meant for each thinker within his own specific context. Hence, for Paul, the cross reveals God’s way of revealing himself and therefore how followers of Jesus should live in the world. The foil for this, from Paul’s interaction with the Corinthian church, is Paul’s defence of his apostolic gospel. Over and against the sleek and successful wisdom of his Epicurean opponents, Paul represents a power that clothes itself in weakness thus subverting any human pretensions to power. Luther, in turn, picks up this subverting notion of power in order to expose the misuse of power within the medieval church. For him, humility is the precondition to elevation. For Luther, the cross is the very means by which God reveals himself and how he deals with sinners. Pascal illustrates a catholic appreciation of the cross and its power to subvert contemporary notions of power within the church: the cross is understood as a sign of foolishness, obscuring God from unbelievers. In turn, God is shown to be revealed in the cross, not reason or creation. And Pascal understands a personal dimension to any theology of the cross: it demands a moral and spiritual reorientation that evidences God’s activity in one’s life.

Secondly, Tomlin applies this robust theology of the cross to the contemporary scene. In particular, he engages with the postmodernist thinker Michel Foucault. This is where Tomlin’s thesis goes into turbo-drive and offers the reader a mine of points of contacts with any contemporary thinker. Of course power is the key issue in contemporary thought. Thus the meteoric rise in postmodern thinking. And of course this could also be the shibboleth that brings down the modern church. However, Tomlin helpfully shows major points of contact and differences between postmodern critiques of power and the theologies of the cross presented from Paul, Luther and Pascal. Here is a veritable arsenal of information for the thinking Christian. Power is a key issue—it always has been—from Eden following. The postmodern turn we experience today only frees contemporary Christianity from its own epistemological prison when it married itself off to modernity. What Tomlin does is to offer the contemporary thinking Christian the content with which to engage both with the ersatz and even downright false notions of power operating within the church and with the confusion of political and economic voices outside it. Buy this book and read it until its content grabs your own mind and heart and soul—and then you’ll make a difference.