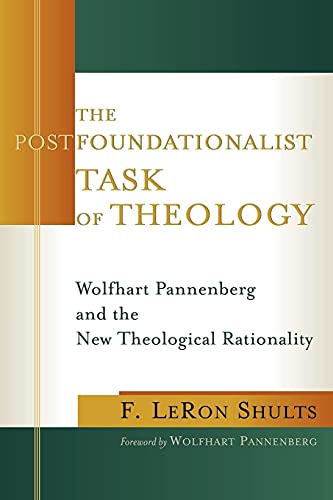 The Postfoundationalist Task of Theology: Wolfhart Pannenberg and the New Theological Rationality

This book has a twin interest. On the one hand, it is a philosophical theological proposal for what Schults calls postfoundationalism, and on the other it is an analysis of Wolfhart. Pannenberg’s theological method, and the book can be read with profit even if one is interested in only one or other of these two foci. Indeed for such a technical subject matter it is remarkably well written—how many other philosophical theologians can handle words such as ‘segue’ and ‘bugaboo’ with such aplomb?

Although the two are not so sharply differentiated in the book, I shall look at the two aspects in turn. First, the proposal for postfoundationalism. Put simply the aim of postfoundationalism is to avoid the dichotomy of demanding that theology be based on some pre-agreed foundations of whatever sort, or that it should eschew all talk of foundations, and is an attempt to redirect discussions of theological method, especially in the US. In their place postfoundationalism is a ‘middle way’—the rhetoric does sound remarkably Blairite at times—which brings together the concerns of both epistemology and hermeneutics, as the four couplets of the second chapter (‘The Emerging Postfoundational Model of Theological Rationality’) illustrate. If this is meant to keep talk of God from the straitjacket of philosophical structures of modernity whether accepted or repudiated a priori this is to be welcomed. However, I would have preferred more theological argumentation for why this particular ‘-ism’ is more suited to the gospel, but for significant portions of the book I searched for these in vain. Indeed more explicitly theological methodologies such as that of Barth are put in the foundationalist camp because they appeal to the foundation of the Word of God, a point where Schults is not at his most convincing and his use of concepts tends to obfuscate rather than clarify the theological landscape. And does not the church indeed have a foundation—and a very unfoundationalist one at that—in Jesus Christ her Lord? It’s not that postfoundationalism is not a good idea, but it will only succeed if put in a proper theological context (which I think might well be possible) next to which Schults’ reasoning seems a little trivial.

Perhaps the most enduring contributions of the book, however, are Schults’ remarks on Pannenberg. Whatever the originality of postfoundationalism the searching critique of the language Pannenberg’s mainly Anglo-Saxon reviewers have used to summarise and criticise his Systematic Theology is genuinely enlightening, and we hear as much from the horse’s mouth in the preface. Rather than serving as a foundation for God-talk Pannenberg’s procedure sublates (in a non-Hegelian manner) fundamental-theological data into a systematically enriched theological synthesis. Schults illustrates this structure with specific reference to Pannenberg’s work on anthropology but would work without much reconstruction for the sweep of his corpus. Schults finds the key to Pannenberg’s theology not in the concepts of reason, history or anticipation but in seeing all reality sub ratione Dei, which is the key methodological marker that this is not a foundationalist starting-point, as would be the other three options. Whether this reading finally wins the day we will probably not know for several years as the works by Pannenberg come to an end, and the works about him increase, but within its remit Schults’ reading is persuasive.

All in all this was an enjoyable and rewarding book, always clear, fair and interesting—though not fully convincing—and teaches the lesson in theological geography that Munich, like Princeton, lies between Yale and Chicago.