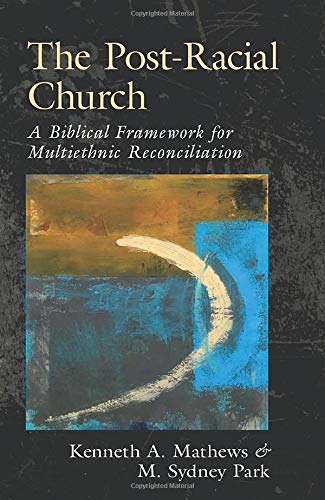 The Post-Racial Church: A Biblical Framework for Multiethnic Reconciliation

Written by Kenneth A. Mathews and M. Sydney Park Reviewed By Jarvis Williams
Ethics and Pastoralia

This review briefly summarizes and critically interacts with the recent work of Kenneth A. Mathews and M. Sydney Park on racial reconciliation. After briefly stating the authors’ thesis and the arguments they offer to defend their thesis, this review focuses on selective critical observations of the authors’ work.

The work of Mathews and Park offers an evangelical and biblical discussion of racial reconciliation in the church. As an OT scholar, Mathews focuses much of his discussion on the OT material that supports the book’s thesis. As a NT scholar, Park focuses the majority of her discussion on texts in the NT. The book has an introduction, eight chapters, and a conclusion. Each chapter concludes with provocative questions to help foster thoughtful discussion. Mathews writes the introduction and chapters 1–4, and Park writes chapters 5–8 and the conclusion. Both their purpose for writing the book and their thesis of the book is “to better equip the church in answering why Christians claim that the gospel and the Christian church are the first and last best hope for peace in a racially diverse world” (p. 22).

After introducing the problem of racism both in the world and in the church, Mathews discusses the method of the book and the church’s role in discrimination and racial reconciliation, and he defines (what would otherwise be) confusing nomenclature (pp. 15–35). For example, Mathews explains the differences between “race” and “ethnicity,” “racism” and “ethnic prejudice,” “multi-ethnic church,” and “ethnic names” as he and Park uses such terms in the book (pp. 30–35). In chapter 1 (“God’s Design for Creation”), Mathews argues that stereotyping is not biblical and was not part of God’s original design for creation (p. 37). Mathews suggests that racial stereotypes are a distortion of God’s original plan for the different races (p. 38), that Jesus has restored God’s master plan for the races through his death and resurrection (p. 39), and that the entire creation narrative suggests that ethnic stereotyping is wrong (pgs. 39–64).

Chapter 2 (“God’s Blessing for All Nations”) argues that Christians must seriously consider the broad historical context of who they are and how they came to be neighbors with different nations if they are to pursue integration in American society and in the church (pp. 67–92). Chapter 3 (“God’s People and the Also Peoples”) argues that the Hebrew Bible never suggests that God’s people was a pure race and that the “also people” were always included into God’s promises to the Hebrew people (pp. 95–121). Chapter 4 (“God’s Welcome to All”) argues that worship of the one God did not begin with Abraham and his descendants, but that there were people among the “other” nations that worshiped him (pp. 125–43).

In chapter 5 (“Jesus’ Stories of Reconciliation”), Park argues that Jesus himself practiced racial reconciliation by ministering to Gentiles and by his teaching although he preached and ministered primarily to Jews (pp. 145–70). Chapter 6 (“Stories of Peace and Worship”) argues that Jesus shattered racial hostility between Jews and Gentiles through his cross and resurrection; God has redeemed a multiethnic church to participate in a universal, multiethnic worship of the lamb, and God will judge a multiethnic people that does not worship the lamb (pp. 173–98). For the former point, Park offers a concise but impressive exegesis of Eph 2:11–22 (pp. 174–87). For the latter two points, Park offers a concise exegesis of selective texts in Revelation (pp. 187–98). Chapter 7 (“The Proclamation of the Church”) argues that the church should proclaim and participate in the practice of racial reconciliation since it reveals the manifold wisdom of God, concealed in ages past but revealed in the present age in the gospel of Jesus Christ (pp. 201–27). Chapter 8 (“One Salvation, One Fellowship”) argues that since there is one church of Jesus Christ that has participated in one salvation and has thereby become one fellowship, the church should therefore take steps to implement racial reconciliation (pp. 229–55). Park argues from numerous NT texts that racial reconciliation includes both ethnic reconciliation and social reconciliation. Finally, in the concluding chapter (“From Here to Eternity”), Park simply makes inferences and applications for the church from chapters 1–8. She urges the church to participate in the work of reconciliation, and she shares her own stories of both racial discrimination and liberation from racist ideologies (pp. 257–71).

I can find very few points with which to disagree since I agree with the thesis. My critical interaction highlights a few of the book’s many strengths and then point out a few weaknesses.

First, the greatest strength by far is that the book is strongly exegetical and presents its exegesis in an accessible way for the broader Christian community. This approach allows numerous readers (scholars, students, and laypeople) to profit from reading the book. In this regard, the book wisely uses transliterations for foreign languages, and it does not overwhelm the reader with unnecessary or overly detailed footnotes. Instead, the authors faithfully discuss many biblical texts in both the OT and NT that address the issues of race relations, and they casually mention key scholarly literature in their footnotes. They discuss a very complex subject (just look at the scholarly literature in NT studies alone on ethnic identity formation in early Christianity) with much clarity and simplicity.

Second, the authors clearly define how they use the terms “race” and “ethnicity” early in the book before they begin to argue for racial reconciliation and before they discuss the biblical material (pp. 30–35). Consequently, readers are not left to discern on their own how the authors use the terms “race” and “ethnicity” or what they mean by racial reconciliation. Third, the authors are brilliant for partnering to write this book since Mathews is a white Southern man, who happens to be an OT scholar, and Park is an Asian Northern female, who happens to be a NT scholar. This combination provides a balanced discussion of racial reconciliation from both Testaments, and their respective ethnicities push the discussion of racial reconciliation beyond the black-white divide in evangelical churches. Park’s personal anecdotes especially complement her exegesis.

First, the book interacts too little with modern social theory on race. This is understandable, since the book is written primarily for the church rather than scholars. However, more detailed interaction with modern race theory seems necessary since many biblical scholars who are currently writing on “race,” “ethnicity,” and “racial reconciliation” are interacting with or responding to such theories.

Second, Park could give more attention to Eph 2:11–22 since this is perhaps the strongest NT text that addresses racial reconciliation. Instead, she limits her discussion almost entirely to chapter 6 (pp. 176–87).

Third, unless I have overlooked the discussion, the book spends no time considering other crucial reconciliation texts in the Pauline corpus such as Rom 5:8–10, Gal 2:11–14, and 2 Cor 5:18–20. Although these texts do not directly speak to racial reconciliation, they do speak to the issue indirectly, for they imply that reconciliation (though vertical) has implications for horizontal, social relationships.

Fourth, the book at times makes historical statements without citing primary literature. For example, the book states this without citing primary evidence: “the history of the Jewish people shows that they were at times guilty of bigotry and at other times were victims of it” (p. 81). The book offers a helpful discussion of hospitality in the ancient world, but does not cite primary texts (apart from the biblical materials) to support its comments about hospitality (pp. 125–43). Texts from the Ancient Near East and the Mediterranean world would further strengthen the book’s discussion of hospitality in the ancient world.

Fifth, when the book discusses Jew-Gentile relations, it does not sufficiently employ Greco-Roman or Second Temple texts that highlight the hostility between Jews and Gentiles in the biblical world.

Sixth, the book would be more user-friendly with a Scripture index.

Despite these weaknesses, Mathews and Park have written a masterful work for the church of Jesus Christ to help her understand the church’s call to be racially reconciled to one another. This is one of the best evangelical works on the market that deals with the race issue. I strongly recommend this book to all interested in a biblical framework for racial reconciliation.