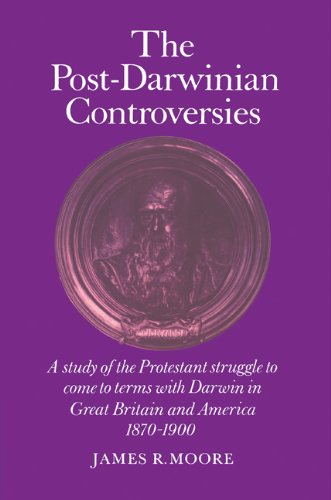 The Post-Darwinian Controversies: A study of the Protestant struggle to come to terms with Darwin in Great Britain and America, 1870–1900

This is a magnificent work of scholarship, extensively documented (with 150 pages of notes and bibliography) and written with great clarity. Its author sets out to revise the customary understanding of the course of the controversies which raged in later nineteenth-century Britain and North America. That understanding has been based on the metaphor of warfare, with ‘science’ and ‘religion’ as the putative combatants. Writers of every school have lapsed into the convenient but fundamentally misleading vocabulary of the battle-field to portray their subject, while their terminology has actually obscured more than it has revealed. The warfare analogy, at almost every point, is inappropriate.

Not that there was no controversy! From the immortal encounter at Oxford in 1860 of the ‘episcophagous’ (p. 68) T. H. Huxley and Bishop Samuel Wilberforce right down to the present day, when, as Moore concludes, ‘the struggle to come to terms with Darwin has not yet ceased’ (p. 351), Darwinism has been the cock-pit of controversy. But the early and numerous opponents of Darwin were chiefly scientists with scientific objections; theologians were defter at taking him in their stride.

Dr. Moore divides the (Christian) controversialists in the generation after Darwin into three schools. First, ‘Christian Anti-Darwinism’: men such as Charles Hodge of Princeton who answered the title of his book What is Darwinism? (1874) with the retort: ‘It is atheism.’ Moore suggests that such reactions owed more to philosophical preconceptions as to the nature of scientific knowledge than to either scientific or theological reason. Secondly, there is ‘Christian Darwinisticism’. Moore argues that attempts to marry Christianity and an evolution of progress and constant betterment such as Herbert Spencer proclaimed, were theologically, always marked by liberal affinities, and, scientifically, divorced from Darwinism proper by a denigration of natural selection as the chief mode of biological evolution. Henry Drummond, ‘Spencer’s ardent disciple’ (p. 224), was a case in point.

The third option is that of ‘Christian Darwinism’, an acceptance of Darwin’s theory on its own terms as a scientific explanation of origins. Moore draws attention to the fact that the chief theological supporters of Darwinism proper were the products of Christian ‘orthodoxy’, generally of the Calvinist type. He maintains—and this is his central argument—that men such as Asa Gray and G. F. Wright were able to accept Darwin because their Calvinism, imbued with teleology, design, Providence, and all the related notions, could be harmonized with a Darwinism ‘steeped in the orthodoxy of the Anglican clergymen William Paley and Thomas Robert Malthus’ (p. 15). Therefore, ‘Darwinism was the legitimate offspring of an orthodox theology of nature’ (p. 16).

One comment may be briefly offered. Dr Moore does not deal with Biblical objections to evolution. His working idea of ‘orthodoxy’ (which he does not define) does not include belief in the infallibility of Scripture, so his demonstration that ‘orthodoxy’ and Darwinism are not incompatible will not convince the reader whose idea of what is orthodox not only includes but begins with an infallible Bible. In the area of biblical interpretation there remain unanswered questions that must be resolved before the controversy over Darwin will lie down.