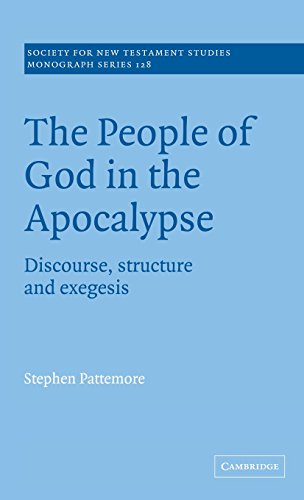 THE PEOPLE OF GOD IN THE APOCALYPSE—DISCOURSE, STRUCTURE AND EXEGESIS SNTSMS 128

The methodology which Pattemore uses is that of Relevance Theory (RT), which has been used in the linguistic field. For Pattemore, RT sharpens interpretation when used alongside other interpretative methods. As he points out, some method of assessment is needed in order to evaluate the large number of allusions to other texts found in Revelation by recent studies. RT provides a way to assess the relevance of various allusions based on the context of the author and audience of Revelation.

Pattemore keys in on the roles that the people of God play as actors in the visionary scenes of Revelation, especially when the people of God take centre stage. In his two central chapters, Pattemore focuses on the people of God as the souls of those beheaded under the altar (6:9–11) and as the great multitude that worships before the Lamb (7:9–17).

Pattemore argues that the scene of the saints under the altar is thematic for the rest of Revelation, particularly in 12:10–12; 16:5–7; 19:1–2; and 20:3–4. He contends that the cry of the saints under the altar is answered throughout the rest of Revelation. The second major theme of the people of God, the saints as companions of the Lamb, is interwoven with the martyred saints, although it remains a separate theme. The relevance of Daniel 7 to Revelation 7 indicates that the crowd before the Lamb is a messianic army headed by the messianic Lamb. This militant description plays out in the following chapters of Revelation and the eventual victory of the Lamb and the saints, which ironically comes through the death of the Lamb. Pattemore contends that both themes challenge the audience to respond faithfully and without compromise even to the point of death.

According to Pattemore, the themes of the martyrs and the messianic community come together and are consummated in the New Jerusalem visions. Here, the people of God are described as the actual city of God. The martyrs are vindicated, the saints reign, and the saints are the bride of the Lamb. Again, the identification of the people of God with the audience challenges the audience to remain faithful and live rightly in the face of present of future suffering.

Pattemore presents a thorough and solid look at the roles of the people of God in Revelation. His presentation brings together the various descriptions of the people of God and shows how the themes interrelate, while pointing out the uniqueness of each theme. His emphasis on the challenges the Revelation presented to the original audience highlights ways in which the message of Revelation can be taught today. whether Relevance Theory is a way forward in hermeneutics or not is not altogether clear. As Pattemore notes, it is still subjective and limited by our lack of knowledge about the context of its author and readers and by our ignorance of that context (215). The benefits of RT may be that it clearly raises the question of relevancy for issues of textual allusion and echoes while also providing a way to evaluate the relevancy of those allusions in the context of the author and readers.