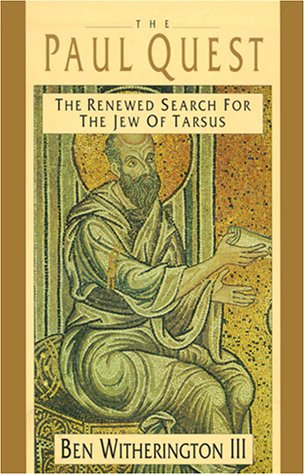 The Paul Quest: The Renewed Search for the Jew of Tarsus

Amidst the attention generated by the Third Quest for the Historical Jesus, the scramble among scholars to reconstruct the Historical Paul has gone virtually unnoticed. With this contribution, Ben Witherington III, prolific author and Professor of New Testament at Asbury Theological Seminary in the US, joins this neglected debate.

In spite of what the title promises, this is not an account of the Quest itself. Rather, Witherington has written his own portrayal of Paul. The first two chapters describe Paul as a first-century personality and identify three factors that shaped Paul’s identity, namely, his Jewishness, his Roman citizenship, and his Christian faith. The remainder of the book consists of chapters organised around paired aspects of Paul’s identity, ministry, and theology. Witherington treats Paul the writer and rhetor; the prophet and apostle; the realist and radical; the anthropologist and advocate; the storyteller and exegete; and the ethicist and theologian. The book concludes with a brief summary chapter plus a 29 page appendix on Pauline chronology. A bibliography, index of authors, and index of subjects round off the volume. Unfortunately, the book contains no index of biblical passages.

Two factors make this book beneficial for students: Witherington’s interaction with secondary literature and his methodology. The first point can be summarised briefly. The second requires more extended comment since an overview of Witherington’s methods offers a glimpse of his interpretation of Paul as well. First, in describing Paul as he sees him, Witherington engages the most important secondary literature on the apostle. Consequently, though this is not the book’s primary intent, the reader gains an orientation to the current state of Pauline studies.

With regard to method. Witherington utilises three approaches to Paul that represent the cutting-edge of Pauline studies: socio-scientific criticism, rhetorical criticism, and a narrative approach to Paul’s theology. The reader thus gains not only an overview of Pauline studies, but also of the contemporary methods guiding those studies. Each of these approaches receives brief explanation below.

Drawing upon the work of socio-scientific critics, Witherington describes Paul in his first-century context as a ‘dyadic’ person, meaning his identity emerged from the group or groups to which he belonged. This central conviction undergirds all other aspects of Witherington’s interpretation and enables him to construct a Paul distinct from modern conceptions of personhood. In such a context, identity was fixed and determined by one’s gender, where one was born, and what family one was born into. As such, identity was socially established and unalterable. Therefore, the transformation brought about by Paul’s conversion from a violent, zealous Pharisee to an equally zealous but non-violent eschatological prophet and apostle of Christ caused him to be reviled as a deviant by many of his contemporaries.

In terms of ancient canons of argumentation, an analysis of Paul’s epistles reveals he employed primarily deliberative rhetoric. In other words, Paul sought through his letters to advise his hearers and gain their consent, thereby influencing the communities’ future course of action. Witherington argues that Paul’s writings must be understood in these terms.

Paul’s theology consists of a series of interconnected stories (about God, Israel, the world, Christ, believers) that reach their climax in the death and resurrection of Jesus Christ. As such, there is no ‘centre’ to Paul’s theology, but a narrative that reaches a culmination in those events. Paul’s ethics derive from this narrative as believers become conformed to Christ’s example of servant leadership.

In a book such as this, no one will agree with the author on every point. Some will find Witherington’s Paul too Arminian (Witherington is Methodist). Others will disagree with the author’s basic embrace of the ‘new perspective’ on Paul. Given the vibrant debate that characterises so many aspects of Pauline studies at the turn of the millennium, such disagreements are to be expected and in no way detract from the overall value of the argument.

Two problems that relate to Witherington’s presentation are worth mentioning. First, the author repeatedly refers to arguments made in his numerous earlier writings without recounting those arguments themselves. Readers should not be expected to have Witherington’s previous books at hand when reading this one. The text is also liberally sprinkled with footnotes instructing the reader to ‘See earlier discussion’ with no page numbers to guide the reader to where that discussion may be found. These shortcomings, however, do not significantly alter the merit of Witherington’s presentation as a whole.

In summary, Witherington has done scholars, students, and pastors a great service by producing a cogent reading of Paid that employs several state-of-the-art methodologies and interacts with the best of recent scholarship. All will find his work useful not only for understanding the first-century Paul, but also for appropriating his writings for today.