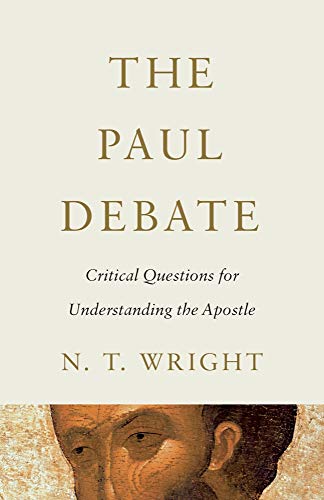 The Paul Debate: Critical Questions for Understanding the Apostle

N. T. Wright is a leading New Testament scholar and an influential voice in worldwide Christianity. Wright’s research on the Apostle Paul, undertaken throughout his career, has been groundbreaking, paradigm-shifting, and exciting. Several years ago Wright released his magnum opus, the two-volume Paul and the Faithfulness of God (Minneapolis: Fortress, 2013). In The Paul Debate, Wright seeks to answer the five most common criticisms of Paul and the Faithfulness of God (PFG).

Actually I suspect the book is designed to answer the six most common criticisms of PFG, five related to content, but one related to its bookcase-hogging girth. While PFG has received wildly enthusiastic praise—rightly in my view—nearly all reviewers have poked fun at its porky size. In fact, in a review of PFG on my blog, I quipped that it was so large that it constituted “its own planetary system”—and I was both surprised and amused to find Wright mentioning this specific critique of PFG in The Paul Debate (p. viii). So Wright is aware of such criticisms. If in The Paul Debate Wright desires to showcase a trimmer synthesis of Paul, then he succeeds. But how muscular is the content?

In the first chapter Wright seeks to clarify a provocative claim advanced in PFG—that Paul was intentionally doing “theology,” and inviting his communities to do the same, in a way that was previously unprecedented. Paul believed that a new mind, a messiah-mind, was needed so that his churches could meet the practical challenge of living a new-creation life in the midst of the present evil age. As one family (Jew and Gentile together) with one messiah-mind, they could pursue holiness and unity.

Chapter 2 is concerned with the way Paul arrived at conclusions about how Jesus was placed “within the identity of Israel’s God” (p. 22). Wright suggests that a neglected motif within Second Temple Judaism was decisive: Israel’s God would “act to deliver his people from the powers of evil and to set up his kingdom over the nations” and would “come back in a new way to dwell with his people” (p. 31, emphasis original). In other words, for Paul, Jesus the Messiah is the embodiment of Israel’s God, the fulfillment of God’s promises to his people and the world. In my judgment Wright’s basic proposal is brilliantly illuminating here, but his suggestion that Jesus is within the so-called “divine identity” needs to be substantially reworked. Wright relies on Richard Bauckham, God Crucified (Grand Rapids: Eerdmans, 1998), but Bauckham’s approach has limitations. For example, Jesus and God (the Father) are not viewed by Paul as consistently within a singular divine identity, but as distinct persons who shape one another’s identity through dialogue (e.g., see Paul’s prosopological exegesis of Rom 15:3, 9; 2 Cor 4:13).

Does God fulfill his covenant promises in the course of continuous history as that history climaxes in Jesus’s actions? Or does God disruptively break into history to win the victory? In Chapter 3, Wright shows that pitting apocalyptic invasion against fulfillment is anachronistic vis-à-vis Second Temple Judaism. Such a dichotomy also fails to deal seriously with continuity for Paul between the God who promises and the God who invades. Surpassing his efforts in PFG, Wright convincingly rebuts a slew of nonsense concerning apocalyptic in Paul.

The fourth chapter concerns the controversial topics of justification and supersession. Wright is critical of traditional Protestant schemes that reduce justification to the transactional salvation of sinners. For Wright, “The Messiah sums up Israel in himself” (p. 76, emphasis original), so justification is predicated on incorporation into the Messiah. The Messiah represents God’s people, because in the resurrection God did for the Messiah in the middle of time what he was to do for his people at the end. In other words, this is not supersession in the sense of wholesale replacement, but rather incorporative representation.

Chapter 5, “Theology, Mission, and Method,” is a grab bag. With regard to mission, Paul’s primary goal was neither to save souls from the wrath of God nor to transform culture. Paul was seeking to found communities that thought with the mind of the Messiah, so they could “produce signs of the new creation in the middle of the old world” (p. 96). From mission Wright jumps to method. Wright seems to be fending off the charge that he has merely deduced results in Paul from a scheme he has dreamed up elsewhere. The proper way forward is the way which Wright insists that he has sought to follow. Abduction involves inductive study of the data and inference to the best explanation, not deduction from an a priori system.

Who will find this book most winning? Graduate students who want to isolate points of debate in Pauline theology will find basic orientation and food for further thought. Many pastors will enjoy it. Scholars will probably only be partially satisfied. The Paul Debate advances discussion, but since it features general refutations rather than point-by-point engagement with other scholars, it is unlikely to sway scholarly judgment appreciably.

In The Paul Debate Wright is a prize fighter in top form. In his earlier Paul and the Faithfulness of God, Wright flexed his considerable intellectual muscle, but what emerged was akin to a sumo wrestler—massive and powerful yet with the ripple of muscle hidden. The stripped-down style of The Paul Debate allows Wright to showcase a svelte, powerful Pauline theology. New moves are on display that readers will not want to miss.