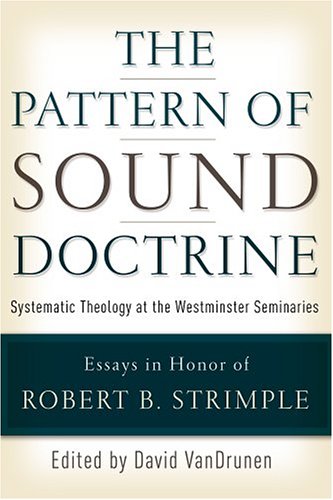 THE PATTERN OF SOUND DOCTRINE: SYSTEMATIC THEOLOGY AT THE WESTMINSTER SEMINARIES—ESSAYS IN HONOR OF ROBERT B. STRIMPLE

Written by David VanDrunen (Ed.) Reviewed By A. T. B. McGowan
Systematic Theology

Dr Robert B. Strimple has had a long and distinguished career as a scholar and as an academic administrator, serving us Professor of Theology. Dean of the Faculty and Vice President for Academic Affairs at Westminster Theological Seminary in Philadelphia and then as Professor of Theology and first President of Westminster Seminary in California. This festschrift is much deserved. It is also somewhat unusual in that it has a coordinated theme, rather than the more normal festschrift pattern of a volume consisting of a number of essays by former colleagues and students on disparate themes. This volume explains, explores, celebrates and defends, the content and practice of systematic theology at the Westminster Seminaries.

The essays vary in style and quality, Some of them, with detailed footnotes and complex arguments (Michael Horton and Scott Clark), would not be out of place in an academic journal. Others are more anecdotal and personally reflective (Edmund Clowney and Jay Adams). What does emerge from the volume is a high level of respect for Dr Strimple and a strong commitment to the discipline of systematic theology at the Westminster Seminaries.

It also emerges that although there is talk of the Westminster tradition in systematic theology. There is no general agreement as to what that tradition is. For example, David VanDrunen, the editor of the volume, in seeking to map out a way forward for the teaching of systematic theology at Westminster in line with its tradition, says that it should be centred on the covenant. He argues that his proposal ‘stands in organic connection not only with Westminster systematics but also with the Reformed doctrinal tradition as a whole’. In his argument, however, he rejects John Murray’s view of the ‘Adamic Administration’ and the centrality of Union with Christ and affirms what Murray rejected, namely, a covenant of works, a covenant of redemption and the Mosaic covenant as a republication of the covenant of works. I see no organic connection.

Other tensions are apparent, such as between those who refer to John Murray’s successor, Norman Shepherd, in a positive light and those who clearly reject his views as heretical. There is also a clear difference between Robert Godfrey and John Muether on the one hand and John Frame on the other, as to the place of confessional statements in theology.

The transparent honesty and willingness to disagree publicly, however, should not be regarded as unfortunate. Indeed, it is very helpful in opening up many of the internal debates which have taken place and are taking place within Reformed theology and in helping us to unravel the wonderful tapestry which is systematic theology as it has been taught and studied at the Westminster Seminaries. I learned a great deal from the book and found it challenging and thought-provoking at many points.