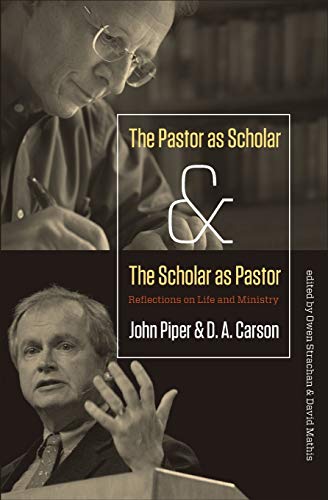 The Pastor as Scholar and the Scholar as Pastor: Reflections on Life and Ministry

Written by John Piper and D. A. Carson Reviewed By Sean Michael Lucas
Ethics and Pastoralia

Through most of my adult life, I have struggled with reconciling my own sense of calling described in the title of this book. Having served on administrative and/or teaching staffs at three theological schools and having served three congregations in various capacities, trying to discern whether I was a “scholar” or a “pastor” has been extremely difficult.

And so it was with great pleasure that I saw these talks first advertised in 2009 and then published in 2011. If anyone could give solid guidance on the topic, Piper and Carson would be the ones. Both have served in academic institutions; both served in pastorates; both think deeply about issues of life and calling in ways that inform all their writing and preaching. And what one finds in The Pastor as Scholar and the Scholar as Pastor is exactly this: personal narrative and application to those wrestling over how to reconcile what appears to be a twin calling.

I found the narratives more engaging and significant. Piper, pastor of preaching and vision at Bethlehem Baptist Church since 1980, told the story of how he came to academic awakening through Wheaton College and especially Fuller Seminary, his doctoral studies in Munich, his growing disillusionment with high-powered, German-focused NT studies, and his internal sense that his ministry calling and passion required congregational ministry. That passion—famously expressed in his sentence “God is most glorified in us when we are most satisfied in him”—led him to minister in a then-older, downtown Minneapolis congregation where he has invested his ministerial career.

On the other hand, Carson had come to congregational ministry seemingly by accident. Already working in a position that used his gifts in chemistry, he came to see that those with whom he worked viewed their work in the chemistry lab as either a god or a burden. As Carson wrestled with this, he recognized that he was receiving great joy in assisting a church plant in Ottawa, Canada. Over time, he served as pastor to a small church in Vancouver. While there, he began to assist a small Bible college; in order to be more useful, he went to Cambridge to do graduate work in NT. After receiving the PhD, he returned to the Bible college and went from there to Trinity Evangelical Divinity School, where he has taught since 1978.

Two commonalities struck me in these narratives: first, the sheer providential nature of each man’s calling. In writing on providence, Calvin famously declared that God is the keeper of the keys; the invisible hand of God clearly directed their pathways by opening and closing doors. A second commonality is a growing disillusionment in the initial pathway: for Piper, it was high-level, guild-oriented NT students; for Carson, it was chemistry. As God moved them into different spheres of usefulness, there was a sense that it was time to take another road yet untraveled.

Less helpful for those wrestling with their callings are the second parts of each chapter. Piper relates how his scholarly mindset and work served as the basis and motivation for the working out of Christian hedonism; Carson offers twelve lessons for seminary professors to maintain a more pastoral mindset. To be sure, there is insight here: as a former academic dean, I especially appreciate Carson’s pointed words to seminary teachers tempted by the guild.

But what I was looking for was more along the lines of this: how does one do ministry with this sense of being both academically oriented and pastorally focused? How does one think of calling as being a calling to ministry that will play out in a variety of spheres? How do we speak to seminarians and ministerial candidates to say that PhDs are useful academic degrees for congregational ministry (and if they are, exactly what pastoral value comes to the pastor and congregation from such a degree)? These questions, along with others, must be answered in order to integrate the twin calling of scholar and pastor sustainably.

In 2009 I returned to congregational ministry, leaving Covenant Theological Seminary to serve a congregation in south Mississippi. As I was leaving St. Louis, I had countless people say to me, “So what made you decide to return to ministry?” (As an ordained minister, I was tempted to reply, “I wasn’t aware that I had ever left the ministry.”) That question demonstrates the need for books like the one written by Piper and Carson. And that question demonstrates the need for further thinking and reflection on how to integrate this twin calling for God’s glory.