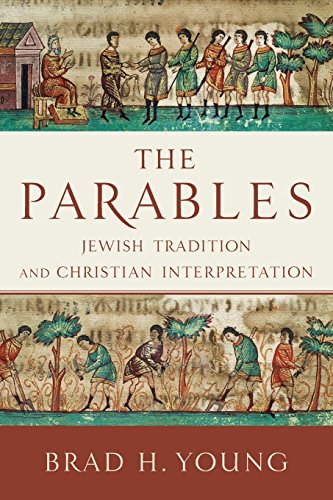 In the much-ploughed field of parable studies, an important corner concerns itself with the relationship between the parables of Jesus and those of the Jewish Rabbis. Brad H. Young is a former pupil of David Flusser, a noted authority in this area at the Hebrew University in Jerusalem, and brings linguistic expertise and immersion in the Jewish sources to his task.

His main burden is that the parables of Jesus should be understood as Jewish tales which chime with mainstream Jewish theology of the time. The book is organised around themes that he finds in the parables of both Jesus and the Rabbis: prayer, grace, reconciliation, discipleship, Torah. He shows that many of the images and scenarios presented in Jesus’ parables have some kind of parallel in other Jewish literature—masters and kings, treasure in fields and so on.

The selection of Rabbinic parables is fascinating. My favourite illustrates the relief of both Israelites and Egyptians at the time of the Exodus:

In other respects, however, I found this book unsatisfying.

First, historically. The thesis that the parables of Jesus and those of the Rabbis belong to a common genre can easily obscure two key facts: that there are considerable differences between the two sets (on which see Craig L. Blomberg’s Interpreting the Parables [Apollos 1991]); and that the Rabbinic parables in their written form post-date the Gospels in theirs. While the Mishnah and other Rabbinic literature no doubt preserved much material that had long been a part of Jewish oral tradition, the distinctions in date and content between the two sets of parables call for a more nuanced comparative treatment.

Second, stylistically. Young is repetitious, and this contributes to an air of tendentious defensiveness. Assertion often simply substitutes for argument. For example, he says he finds the translation ‘falsely accused’ in Luke 16:1 (the shrewd steward) ‘not convincing’, but by way of support simply states: ‘The unrighteous steward was involved in wrongdoing and was not falsely accused’ (236). A ‘suggestion’ that the parables in Luke 15:3–7 originally followed the call of Levi is quickly re-cast as fact, though qualified: ‘He told these stories at the dinner table of Levi. At the very least, both the story of Levi and the parables contain nearly identical themes’ (188–90).

Third, in literary awareness. The crucial question is surely what Jesus and the Rabbis respectively dowith their common stock of images. Again, Young tends to smooth over the differences and he draws little from recent work on the parabolic form of discourse. He often writes about the parables ‘teaching a message’ in a way which misses their subtle indirections.

Fourth, hermeneutically. There is a positivism here characteristic of historical-critical scholarship in its heyday, but which now looks tired. Interpretation of the parables of Jesus will vary depending on the particular ancient context in which they are set and on the aims and interests of the interpreter. The Rabbinic parables provide one important context, but if one is concerned with the specific aims of Jesus, one will need a wider range of Jewish sources to get nearer the mark. Significantly, Young’s most effective chapter, that on the Good Samaritan, hardly depends on any Jewish parables, but on Jewish sources more generally. In discussing Christian interpretations, he can be insensitive to what the interpreters are doing. When Clement uses the image of sowing to point to the truth of resurrection (1 Clem. 24), one thing he is clearly not doing (pace Young) is interpreting the parable of the sower!

Fifthly, Young does not draw significantly on recent sociological studies of the NT period that can help us, for instance, to imagine the all-too-real situations of oppression behind a parable such as that of the unforgiving servant. In his haste to see a common ‘theological’ theme between such a parable and Rabbinic counterparts, Young (despite the conventional anti-allegorical protestations) continues the time-honoured tradition of seeing figures such as the master as direct windows on to God, without stopping to consider the hard questions about an implied comparison between Yahweh and a first-century despot who is happy, in principle, to torture his subjects and imprison their penniless families. Such questions may suggest that the parable is rooted in an earthy wisdom tradition, and speaks of God (if at all) much more indirectly than we have usually assumed.

Sixthly, there is a theological imbalance arising out of these other shortcomings. I believe Young is right in his main contention that Jesus’ parables were concerned to inculcate a true obedience to Torah; Christians who have been accustomed to read the parables simply as illustrations of a Pauline message of justification by faith should pay careful attention—and should especially be challenged by Young’s close linkage of the stance of Jesus with that of the Pharisees (overstated but a useful corrective). But the elision of important differences between the Rabbis’ parables and those of Jesus make for a flawed overall picture. Above all, Jesus’ self-understanding as the final Prophet is surely revealed in these remarkable stories which (unlike their Rabbinic counterparts) do not simply interpret the Torah, but speak to situations with their own, direct authority.