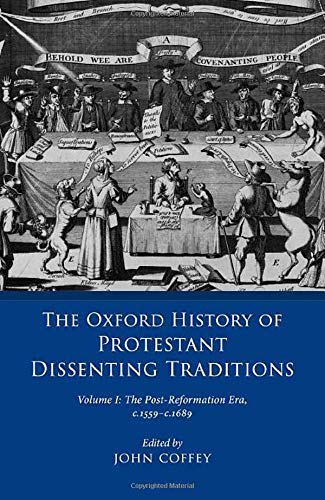 The Oxford History of Protestant Dissenting Traditions is a collection of five substantial volumes exploring the narrative of Protestant dissent from the Reformation era to the twentieth century. The first volume examines Protestant dissent in the Anglophone world from the Act of Uniformity of 1559 to the Act of Toleration of 1689. It features twenty-one contributions, each one teasing out a particular dimension of the variegated, complex landscape of religious nonconformity. Arranged in four parts, the first half of the volume considers the dissenting traditions within and outside England: Presbyterians, Congregationalists, Baptists, and Quakers. The second half reassesses the nature of dissent concerning gender, sermons, politics, print literature, and worship.

While the structure and the progression of the volume are logically arranged, there is a peculiarly striking imbalance of material. Four chapters are devoted to Presbyterianism, including R. Scott Spurlock’s chapter on dissent in Scotland, devoted to Scottish Presbyterianism. In contrast, there are two chapters on the Quakers and one chapter each on the Baptists and Congregationalists. One strength of the chapter arrangements, however, is the attention given to Transatlantic and Continental Anglophone dissent, as demonstrated by chapters on American colonial dissent and English nonconformity in the Dutch Republic.

This tome challenges older historiography on nonconformist dissent by reassessing the idea of denominational lines of demarcation, one that tends to highlight denominational identities in the early modern era as clear-cut and straightforward. This work aims to demonstrate “the contingency of Dissent, as well as the fluidity of seventeenth-century denominational identities,” while also acknowledging that nonconformists “went to great lengths to sharpen the boundaries of group identity” (p. 3). The chapters that address denominational traditions aptly illustrate and support the volume’s primary purpose by tracing the heritage of Protestant dissenting traditions, highlighting their flexible borders.

Two chapters are noteworthy of mentioning. Jacqueline Rose’s intriguing study investigates how Dissenters and their polity advocated the notions of persecution and toleration. Rose argues that persecution and suffering “fostered the identity of Dissent, and the memory of suffering retrospectively solidified categories of Dissenters” (p. 314). She challenges and corrects the mid-twentieth century assertion that England was transformed from a persecuting state to a tolerant state in the seventeenth century, contending that the narrative is much more complicated and nuanced than previously purported.

In his chapter on Congregationalists, Tim Cooper stresses the challenges in labeling English Dissenters with concrete binaries. He suggests that more attention be given to appreciating the “underlying complexity and divergence even within those labels” (p. 110). John Owen, a Congregationalist, viewed the practices and principles of Presbyterians as essentially the same as his denomination’s distinctives, demonstrating that denominational lines were much more porous than has been interpreted. At the same time, however, the attitudes of Dissenters towards one another across denominational boundaries created a paradoxical ambiance in which “minor differences” of doctrine or practice instigated “major aggravation” (p. 111).

Unfortunately, this volume contains a surprisingly high number of typos, errors, and formatting gaffes for an expensive scholarly work by a top-tier publisher. Inconsistent footnote formatting, with the occasional incomplete or missing data in the footnotes, plagues every chapter. Some will find it frustrating that sometimes when references to primary sources are made (such as on page 464), there is no corresponding citation in a footnote, making it difficult to follow up.

Those aside, this work stands out in the way in which it highlights the richness and diversity of each dissenting tradition, avoiding the monolithic approach that many works addressing confessional identities tend toward. The scope of topics featured in the second half of the volume conveys the multi-faceted, nuanced world of Protestant dissent, reminding us that dissent involved and affected multiple layers of religious and social life. This volume is an essential compendium for and welcome addition to early modern religious studies, bringing a fresh approach and a much-needed reassessment of confessional identity in early modern Protestantism.