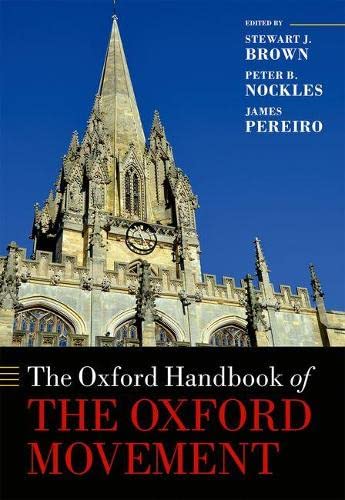 The Oxford Handbook of the Oxford Movement

The Oxford or Tractarian Movement arose circa 1833 because its leading figures believed that parliamentary decisions then unfolding in Britain were working to undermine the prerogatives of the Church of England. They combatted these changes by promoting the conception of the apostolic succession (and independence) of Anglican bishops and doctrinal teachings of a Roman type which had found support in the era of former Archbishop William Laud (1573–1645). Their stance was, broadly considered, hostile to the legacy of the Reformation. In the face of strong opposition generated within and beyond Anglicanism, there were major defections to Roman Catholicism circa 1845. What began as Tractarianism continues as the Anglo-Catholic expression of Anglicanism. By late 19th century, the influence of the Oxford Movement reached beyond Anglicanism to other forms of Protestantism, creating ferment there.

Major works on this 19th century movement and its leading personalities—whether biographical or of a reference orientation—have often been released at the approach of notable anniversaries of what began in 1833. The volume under review—which comprises an anthology of 42 independently-authored chapters organized under 8 thematic divisions—is an exception to this pattern. Instead it is a consolidative volume providing readers with a sampling of the best scholarship of the last quarter-century on this part-romantic and part-reactionary early Victorian religious movement. One can perceive continuity between it and a previous volume edited by Brown and Nockles, The Oxford Movement: Europe and the Wider World 1830–1930 (Cambridge: Cambridge University Press, 2012; reviewed in Themelios 38.3).

Researchers do not immerse themselves in the study the Oxford Movement merely because it awaits the daring; they give themselves to the study of the movement because of a fascination with its leading personalities and an attraction to the convictions which they championed. Their fascination is often driven by admiration and party loyalty; it may also be driven by the conviction that this movement was wrong-footed. To its credit, this Oxford Handbook provides us with contributions of both kinds, though the former clearly outnumber the latter.

This Oxford Handbook could not serve as an effective introduction to this field of study; any novice would be avalanched under its detail. But the reader who had taken in hand a good biography of John Henry Newman (1801–1890) would soon be able to profit immensely by the resources provided here. With this said, it would still be wise to begin at the Oxford Handbook’s end. For there, in two reflective chapters concluding the work (42 and Afterword), the writers Peter B. Nockles and Colin Podmore provide the best of starting points. Nockles provides an informed survey of the kinds of historical writing about the movement (partisan and otherwise) penned since 1850. Of equal importance is Podmore’s sketch of what has become of this movement which beginning as Tractarianism soon morphed into Anglo-Catholicism. Today’s Anglo-Catholicism reflects all the fissures over gender and sexuality which confront the Anglican Communion globally.

The forty-two chapters are arranged under eight categories, a few of which are: “Origins and Context” (I), “The Theology of the Oxford Movement” (II), “Cultural Expressions, Transmission, and Influences” (V), “Beyond England” (VI) and “Into the Twentieth Century” (VII). Few readers will have the leisure to plow through the book’s 632 pages in linear fashion; they will instead gravitate to the section(s) which shed light on questions which have arisen in their own reading.

In an uncanny way, our own generation is now sharing in a romantic longing for “imagined Christian pasts” which longing was such a pronounced feature of the original Oxford Movement. A reader who acknowledges this affinity will be especially helped by the contributions on the evangelical background of many of the first Tractarians (ch. 3) and the commitment to the Bible which characterized the first (but not the subsequent) generation (ch. 16). In spite of these original moorings, the first generation generated both empathy and hostility with the steady release after 1833 of their “Tracts for the Times.” Shortly, both High Church Anglicans and evangelicals within and beyond Anglicanism were alarmed at the Romanizing tendencies detected in these pamphlets (ch. 10) and this alarm brought with it a decided reaction which led to the termination of the series (ch. 12).

The Handbook also explains how Newman’s re-affiliation to Rome in 1845, rather than crippling this movement, only obliged to enter a new—and more stable—period of existence (chs. 21–22). Across the remainder of the 19th century, the Anglo-Catholic party grew, though at its height it would not have included more than one in twenty Anglican clergymen, persons who by outlook were most oriented to parishioners of the middling and professional classes (ch. 24). Anglo-Catholicism, in addition to embracing the original Tractarian emphases, came to enfold two other tendencies with which it was not at first associated: a liturgical movement originating in Cambridge, dedicated to the recovery of ancient liturgies, and an aesthetic movement determined to see Gothic architecture revived (chs. 25, 28).

We find, on reading, that we owe thanks to this movement for the role it played in the recovery, composition and compilation of hymnody (a thing to bear in mind the next time we sing, “Of the Father’s Love Begotten” or “Holy, Holy, Holy” [ch. 26]). If we want to know the origin of the re-institution of Protestant religious orders for women and men, we find it with these same Anglo-Catholics (ch. 27).

In sum, here is a most valuable guide to the Tractarians. The volume establishes that global Anglicanism in all its expressions has taken on hues provided by this “ginger group.” Yet it bears repeating that this major work gives only a very minor place to cautionary voices which draw attention to the error entailed in affirming—as the early Tractarians did—that it was the extent to which their Church approximated the faith and devotional norms of Rome that would determine her legitimacy. Now, just as in early Victorian England, this delusion needs to be opposed.