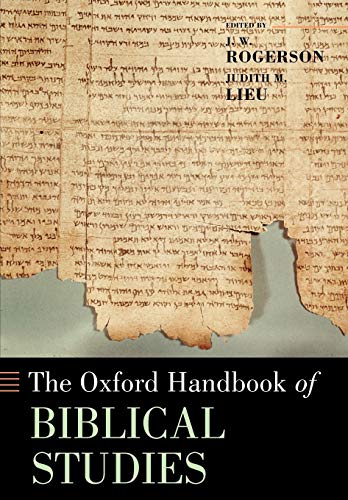 The very idea of putting together a handbook of biblical studies should alert the informed reader about the longstanding difficulties with regard to synchronizing the contributions coming from just about everywhere. At the core of such difficulty is the uncertainty regarding the way one should handle the many issues related to the subject. The editors are well aware that synchronizing does not entail harmonizing the contributions, instead, the “diversity that becomes apparent in the Handbook is a reliable guide to the present state of biblical studies” (p. xvii). That continues to be the aim and certainly the main contribution of The Oxford Handbook of Biblical Studies—to encourage scholars to integrate and contextualize their findings into this diverse whole.

The opening essays on the history of the discipline show us that the resultant picture “is that of a discipline full of vigour, offering many new challenges and possibilities” (p. 22). In this regard it is encouraging to see the integration of the essays on the contribution of archaeology (Bartlett) and ANE studies (Lambert and Kitchen), in section 2, with their “counterpart” in part 5 dealing with methods in biblical scholarship: “The main problem of biblical archaeology was that it was one-sided, attempting to fit archaeological evidence into the mould set by biblical historians” (p. 576). The Oxford Handbook of Biblical Studies is an attempt to interfere with this one-sided approach by making available in one volume a sizable collection of contributions. This is a significant contribution of the handbook, namely, to acknowledge the impact that other disciplines have upon biblical scholarship.

Since its first appearance in 2005, the Oxford Handbook of Biblical Studies has been reviewed and criticized from different angles; the last section on authority seems to attract all types of reaction. The essay by Harriet Harris dealing with Fundamentalism has been criticized elsewhere in that “the primary focus seemed to be on critiquing fundamentalism, rather than describing the larger (and quite varied) landscape of views about how the Bible functions authoritatively today.” Yet, Harris ends her essay with a review of Kevin Vanhoozer’s contribution on the subject, saying that he responds to fundamentalism by offering the conditions for a theology constructed differently, in which the triune God is the ground of faith and Scripture, and the Spirit speaks through Scripture to make it efficacious. On a fundamentalist rendering, by contrast, Scripture is the ground of faith, meaning that it is the basis upon which we know anything about God, and the triune God inspires and interprets Scriptures in order to ensure the sufficiency of the evidence it contains. This section on authority ends with an essay by J. W. Rogerson, who is conscious that the section will seek to do the impossible, namely, to describe how and in what ways the Bible is authoritative. For Rogerson, the impossibility has to do with the many different ways in which such authority is viewed by different churches (p. 853).

Unfortunately, the purpose of such a promising project can be easily defeated by the selective reader who bypasses the synchronizing character of the handbook genre and focuses on the conflicting voices in the essays. Being involved in Latin American scholarship, I certainly welcome the project of a handbook on biblical studies for the simple reason that it fosters contribution without isolation, a problem that has characterized much of the Latin American voice in current discussion.