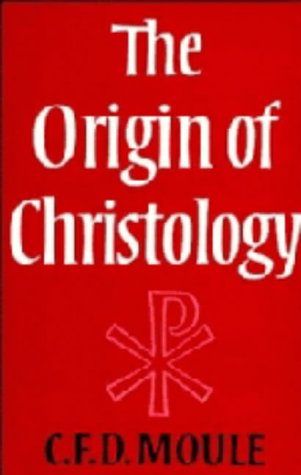 The Origin of Christology

Published almost simultaneously with The Myth of God Incarnate (though there is no reason to believe this was deliberate), Professor Moule’s book presents a striking contrast to it. His aim is to show that the key to New Testament christology is Jesus himself. The New Testament writers are articulating, in their very different ways, something which was there from the beginning. Even in using divine language about Jesus, they are not adding a new and alien dimension to the simple prophet of Galilee, but expressing an inevitable conclusion from their experience of Jesus, not only in his post-Easter glory but even in his earthly ministry. It was not so much his teaching which launched New Testament christology (though that is an important element) as what Jesus was in himself.

Professor Moule therefore talks of a ‘development’ of an already present truth rather than the ‘evolution’ of an ever higher christology as a result of contact with other religious ideas. The analogy may not be the most helpful, but the point is clear and important.

It is also very ‘conservative’, and Professor Moule is almost painfully conscious of the fact, constantly stressing that it is the evidence, not a preconceived theological stance, which has dictated his conclusions. ‘This is an absurdly old-fashioned conclusion, but the question is whether it does not still fit the evidence’ (p. 35). ‘So conservative a conclusion is, in the nature of the case, suspect, because it is liable to be biased by vested interests. I have myself viewed it with suspicion; but, in spite of this, I find myself convinced by the evidence’ (p. 47). He explicitly disclaims any doctrine of inerrancy, or of the necessary authenticity of the sayings attributed to Jesus (though in one trenchant paragraph on p. 98 he dismisses most of current Synoptic criticism!); but most of this book will command the enthusiastic support of those who are less embarrassed to be thought ‘conservative’.

It is not heavily documented, nor abstruse in its argument, but clear and readable. Even where Professor Moule takes us through the detailed linguistic studies in which he excels, it is hard to get lost. Occasional flashes of commonsensical wit include this (on the use of kyrie as an indication of high christology): ‘It would be as truthful, statistically, to reckon a schoolboy’s “O Sir” as evidence that the schoolmaster had been knighted’ (p. 35); and this (on Maranatha): ‘One does not call upon a mere Rabbi, after his death, to come’ (p. 41).

Chapter 1 covers well-trodden ground lightly, discussing the origin and significance of ‘Son of man’, ‘Son of God’, ‘Christ’ and ‘Kyrios’, with much careful linguistic study. Despite the brevity, one is conscious of listening to a master.

Chapter 2, on ‘The Corporate Christ’, is the most detailed, showing, mainly from the use of ‘in Christ’ language and from some of the ‘body’ passages, that Paul recognized in Jesus someone ‘more than individual’, an ‘inclusive personality’. ‘And this means, in effect, that Paul was led to conceive of Christ as any theist conceives of God: personal, indeed, but transcending the individual category’ (p. 95). This chapter does not pretend to be a complete treatment of Pauline christology, but its one main point is an important contribution.

The remaining chapters are subsidiary, showing (ch. 3) how the rest of the New Testament coheres, though in very different forms of expression, with Paul’s basic insight, seeing Jesus’ existence as ‘divine and eternal’ (p. 99), and in particular how the New Testament understanding of Jesus’ representative death (ch. 4) and of his fulfilment of the scriptural pattern of the people of God (ch. 5) attest the same experience of Jesus as ‘more than individual’. Even language about Jesus’ pre-existence and the actual attribution of divinity to him are valid expressions of what New Testament Christians had experienced him to be (ch. 6).

A final chapter reproduces a debate with Dr Haddon Willmer from the pages of Theology, on the contemporary and future relevance of Christ. Here the masterly lucidity of Moule the New Testament scholar disappears, and at least one reader found himself all at sea, concluding that the book would have been better without this excursion away from its professed subject.

The book as a whole makes no claim to be exhaustive, but its various forays into central areas of the subject add up to a more cogent statement of the essential character of New Testament christology than any detailed textbook could achieve.

Is there pseudonymity in the Old Testament?

The Hermeneutical Problem of Genesis 1–11

What are they Saying about Jesus?

Reviewed by Bruce A. Demarest

Rediscovering the Traditions of Israel: The Development of the Traditio-Historical Research of the Old Testament, with Special Consideration of Scandinavian Contributions

Can we Trust the New Testament?