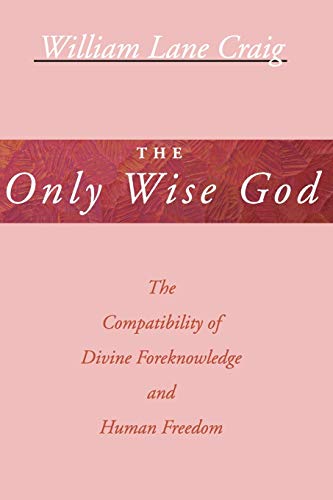 The Only Wise God: the compatibility of divine foreknowledge and human freedom

Today’s evangelical students are justifiably perplexed over the issue of divine foreknowledge. Christian tradition and the Bible itself seem to affirm clearly that all future events are known to God, whereas such eminent contemporary Christian philosophers as R. Swinburne and K. Ward are denying it and even an evangelical spokesman of the calibre of C. Pinnock has openly agreed with this negative view. Undoubtedly the shift of thinking comes in the wake of process thought which stresses both divine temporality and human creativity and freedom. Given these two beliefs, divine foreknowledge is jeopardized for two major reasons. Firstly, there seems to be no possible basis whereby a temporal being can know what does not yet exist, namely a future including unpredictable free actions, and secondly if God were to know the future, human freedom would seem to be paralysed since every choice must conform to what God infallibly knows will happen; foreknowledge seems to entail fatalism.

Into the debate enters American philosopher W. L. Craig who has produced a remarkably lucid survey of the relevant issues and offered a robust defence of the traditional doctrine of divine omniscience. He begins by reviewing the scriptural evidence and concludes that not only does the Bible consistently teach that God’s knowledge extends to future free acts, but also provides numerous examples of predictive prophecy. Passages implying divine ignorance (e.g. Je. 36:3) or repentance are interpreted as anthropomorphisms and unfulfilled prophecies as implicitly conditional, that is forewarnings of what will transpire unless a change of heart is exhibited by the people.

Craig then seeks to evaluate the argument for theological fatalism. One way of avoiding the painful conclusion that if God infallibly knows that I will perform a certain act tomorrow, then I must necessarily and inevitably do it, is to deny that such statements about the future have any truth value; they therefore cannot form part of God’s omniscience. In other words, at the present moment it is neither true nor false that I will perform that act tomorrow and so even a God who knows all truths is necessarily ignorant of my future choice. But this attempt to avoid fatalism is unacceptable to Craig not only on theological but also on philosophical grounds. For example, he argues that the same facts that make a present or past statement true or false also make a future tense statement true or false. He asks, ‘If “it is raining today” is now true, how could “it will rain tomorrow” not have been true yesterday?’ (p. 58). For Craig the achilles heal of fatalism lies rather in a logical fallacy. The fallacy is that fatalism assumes that what God foreknows must happen, whereas in fact it merely entails that it will happen. ‘Jones is free to do whatever he wants, and God’s foreknowledge logically follows Jones’s action like a shadow, even if chronologically the shadow precedes the coming of the event itself’ (p. 74).

Craig denies that this insight involves the awkward notion of reverse causation. God’s knowledge is not caused by Jones’s future action, rather the action provides the logical ground of God’s knowledge. The relationship is one of ground/consequence not cause/effect. In fact Craig continues with a lengthy analysis of reverse causation concluding that while it is logically possible (there is no logical contradiction inherent in the idea of causing the past as there is in altering the past), it is ontologically or actually impossible because something cannot be the result of nothing and the future in no sense exists to produce anything.

For similar reasons he argues that time-travel back to the past is logically possible but actually impossible. The chapter on this subject provides some light relief after the labour of working through some fairly technical philosophical arguments, as Craig recounts the outline of a short story by Robert Heinlein in which a time-traveller journeys into the past and marries his own mother and thus becomes his own father. But not content with this he travels further back, undergoes a sex change, marries himself and so becomes not only his own father but his own mother as well!

After an examination of two other recent areas of discussion which directly relate to the foreknowledge question, namely precognition and a philosophical thought-experiment known as Newcomb’s paradox, Craig looks at the basis for divine foreknowledge: how can God know what does not yet exist? Consistent with his rejection of reverse causation is his denial that God acquires his knowledge empirically by observation. Instead, Craig maintains that God has an intuitive and innate knowledge of all truths, and since, as he has already argued, statements about the future have truth-value, God’s knowledge encompasses the future.

In the final chapter of the book Craig extends this contention to the claim that God also possesses Middle Knowledge, that is knowledge not only of all actual events, past, present and future, but also of all possible or hypothetical events, including those involving free creatures. He claims that this view not only has some apparent scriptural support (e.g. 1 Sa. 23:6–13; Mt. 11:20–24) but also possesses tremendous explanatory power in elucidating such time-honoured conundrums as predestination and freewill (God chooses to actualize the possible universe in which the predestined one freely chooses salvation) and the fate of the unevangelized (God so arranges matters that those who remain unevangelized are, in fact, those who would not anyway have believed had they heard).

Craig’s book is a superb introduction to a debate which has raged for centuries but which has become particularly prominent in the past couple of decades. He presents the issues with a clarity that is the product of a mastery of the material, and he argues his viewpoint with persuasive conviction. Not only is he cogently meeting the current objections to divine foreknowledge, but along with American colleagues like Alvin Plantinga, Craig is forcing theologians and philosophers to re-examine the doctrine of Middle Knowledge which has long been in eclipse.

In my estimation a few weaknesses are, however, apparent. Although Craig crosses swords with a few particular scholars like N. Pike and D. A. Carson, many significant contemporary names, like C. Pinnock and R. Rice, remain unmentioned even in the bibliography which is disappointingly sparse. It is frustrating that he often critiques ideas without specifying who holds them or without attempting to place them in the context of the history of ideas (key names in the debate like Augustine, Boethius, Ockham, Socinus and Whitehead are not even mentioned). But this should by no means be taken as a demonstration of the author’s ignorance as is emphatically demonstrated by the recent appearance of his masterly survey, The Problem of Divine Foreknowledge and Future Contingents from Aristotle to Suarez (E. J. Brill, Leiden, 1988). Nevertheless it would have been helpful to be informed, for example, that the doctrine of innate omniscience goes back through Aquinas and Augustine to Plotinus and is not a recent invention.

Turning to what Craig does say rather than what he omits, and ignoring minor lapses (e.g. on p. 40 he recalls how God appeared to Abraham ‘in the guise of three men’, whereas the visitors were actually God and two angels: cf. Gn. 19:1; and the biblical reference on p. 138 seems to be incorrect), I would like to question two or three more substantial points.

Firstly, one of the reasons why Craig rejects fatalism is that it involves the fantastic notion that some force (fate?) constrains my action simply because a future-tense statement about it is true (p. 69). The problem here is that Craig himself seems to be failing to acknowledge a distinction which he helpfully introduces us to elsewhere, for the fatalist is not claiming that my action is compelled (cause/effect) but simply that the fact that a future-tense statement is true is sufficient condition (ground/consequence) of my action.

Secondly, Craig’s contention that reverse causation is actually impossible is questionable. His argument is that ‘at the time the effect is produced, the future cause is quite literally nothing. And it is ontologically impossible that something should come into existence out of nothing’ (p. 80). Yet strictly speaking of course, a past cause is similarly non-existent now, it is also ‘quite literally nothing’. However, Craig would presumably maintain that the difference is that nevertheless the effect had a tangible cause in the past whereas this is not the case with reverse causation. But this self-evident assertion simply begs the question of whether a future event cannot also bring about a present one. Actually, it can be argued that there is no more reason to suppose that the non-existent future cannot be precognized as to assume the non-existent past cannot be remembered.

Finally, the coherence of the concept of innate knowledge of the outcome of a contingent world remains far from evident. Craig offers one example of purely intuitive knowledge of the empirical world when he claims that other minds are neither immediately perceived nor causally inferred (p. 120). However, although this may be strictly true, nevertheless our imputation of minds into things is influenced by empirical factors so that our early assumption that, say, dolls and flowers have feelings is modified in the light of evolving experience. Other minds might not be observed or inductively inferred but they are unconsciously assumed as the best explanatory hypothesis for much of what we discover in the world.

One could go on to cavil over other points (could not the theory regarding the unevangelized seem offensively prejudicial towards unreached races with its assumption that none of them would have chosen piety anyway?) but these criticisms should not be allowed to overshadow the enormous value of the book, which is one of those rare works that not only inform and clarify one’s inchoate thoughts but also open up whole new vistas of useful speculation.

Responding to the God of history

Intertestamental Judaism, its literature and its significance

Faith and philosophy in the early church

Faith or Fear: A Reader in Pastoral Counselling

How Karl Barth Changed My Mind

Reviewed by Tony Lane
Religious Studies
VIEW ALL VIEW ALL