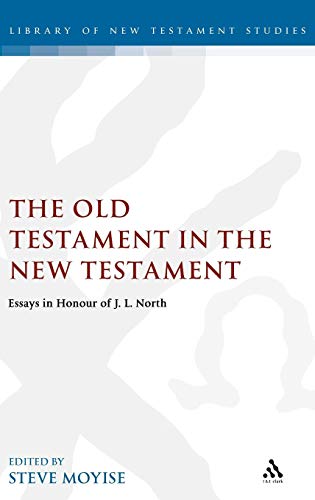 The Old Testament in the New Testament Essays in Honour of J.L. North (JSNTSup. 189)

This collection of essays appears marking the retirement of J. Lionel North from Hull University in 1999 where he served as Barmby Senior Lecturer in New Testament Studies, and especially in honour of his impressive seventeen-year leadership of ‘The Use of the Old Testament in the New Testament Seminar’. As North explains in a brief epilogue to this volume, the seminar traces its origins to the earlier work of the British Seminar from 1963 when ‘seminar groups’ were first introduced. North provides an overview of the development from Matthew Black’s leadership of ‘The Christological Use of Old Testament in the New Testament’ seminar in the mid-seventies to his work as chair of the seminar through most of the eighties and nineties. The preface, provided by the editor of the volume and current seminar secretary Steve Moyise, commends North for ‘his lexical and text-critical expertise’ and the irenic manner in which he ‘ensured debate was always constructive and conducted with courtesy’. The list of scholars whom North lists as seminar participants in the epilogue as well as the contributors to this volume are evidence that this seminar embodies and also provides the benefits of scholarship emerging from a plurality of interpretative strategies and methodological assumptions.

There are two introductory essays provided by Moyise and Maurice Casey, respectively. The second section, Gospels and Acts, includes seven essays on OT/NT intertextuality concerning the first five books of the NT. Michael Goulder, David Instone-Brewer, Maarten J.J. Menken, Crispin H.T. Fletcher-Louis, Judith Lieu, Wendy Sproston North, and Peter Doble all contribute. In the final section, ‘Epistles and Revelation’, J.C. O’Neill, Morna D. Hooker, Ivor H. Jones, and Ian Paul add four essays addressing themes or textual issues from the rest of the NT. Obviously, it is impossible to do justice to any of these essays in a brief review. What little can be said may alert readers to essays where particular interests might be piqued.

Moyise’s chapter introduces the complexities associated with ‘intertextuality’. He appreciates the openness the term suggests, evoked by the multiple layers of texts provided by both authors and readers. Noting that the word itself suffers from ambiguous usage, he provides sub-categories that will help scholarly dialogue by discussing three particular kinds of inter-textual discourse. ‘Intertextual Echo’ weighs the possibility and significance of intertextual subtleties. ‘Dialogical Intertextuality’ attends to ‘the interaction between text and subtext’ in a manner where the interaction ‘is seen to operate in both directions’. ‘Postmodern Intertextuality’ pays close attention to the reader’s ability to distort the text and forces contemporary readers to consider the effect their presuppositions will have upon the interpretative enterprise.

Maurice Casey’s introductory article about Christological exegesis of the OT and Michael Goulder’s contribution about Jesus’ conception of his own vocation overlap in providing critiques of traditional Christological formulations. Casey is particularly critical of Larry Hurtado’s arguments for the deity of Christ based on interpretations of the early church’s worship of Jesus. Against Hurtado, Casey argues that ‘cultic veneration of Jesus was seriously lacking’ because sacrificial cultus, a physical temple, and prayers directed to him were all missing. One wonders where one might begin in responding to such an argument.

Brewer and Menken both provide studies that detail some aspect of an NT author’s use of prior texts. Their articles raise good questions and posit helpful solutions for in light of Matthew’s particular concerns and techniques.

Morna Hooker’s chapter, a response to Markus Bockmuehl’s 1997 article ‘The Form of God’ (Journal of Theological Studies, 48, pp. 1–23), is a bright spot. Unwilling to treat individual terms like islands unto themselves, she boldly synthesises Paul’s thought on incarnation, image, Adam, and his ‘Son of God’ language, drawing insight from virtually all of his undisputed letters. In so doing, she ably defends an Adamic interpretation of Philippians 2 and Christ’s status as the Son of God in true humanity.

The major strength of the book is that, like the seminar itself, it reflects a broad range of scholarship. It makes one long for another book from the same seminar where each scholar lays his or her presuppositions on the table, argues for them and engages in critical dialogue with those who adhere to different perspectives.