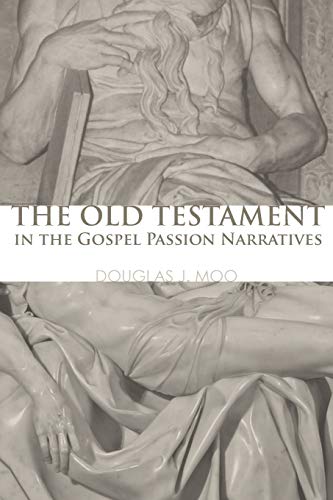 The Old Testament in the Gospel Passion Narratives

The opening chapter places the material in its Jewish context. Moo usefully catalogues the various genres of Jewish material which use the Old Testament and the kinds of citation employed. Of key importance is his discussion of what he calls the modes of appropriation. He discusses and exemplifies straight appropriation of the text without change, especially in the use of typology; reorientation of the text by shifting its meaning or modifying its working; and modification of the events as they are seen in the light of the Old Testament, for example, by the ‘creation’ of new details (a procedure which is not in fact found very often).

In the major part of the thesis Moo studies the use made in the passion narratives of the Isaianic servant material, Zechariah 9–14, the lament psalms, Old Testament sacrificial imagery, and other miscellaneous material. In each case a brief introduction leads to a study of the uses in the New Testament with attention being paid to the precise wording of the Old Testament influence and to the manner of appropriation.

Moo concludes that the Old Testament influences are essentially confined to the four main areas listed and that, except in Matthew, there are at least as many references attributed to Jesus as are inserted by the evangelists themselves. The evidence favours C. H. Dodd’s theory of Old Testament ‘fields’ from which references were drawn rather than a testimony-book hypothesis, and Jesus is seen as the source of the church’s use of the Old Testament. Shifts in the meaning of the Old Testament texts are rare, and the hypothesis of ‘creative’ details being inserted in the narrative due to Old Testament influence is never the most probable explanation of the text. The Old Testament is regarded as foreshadowing and foreseeing the events in the passion story, and it provided important input in the development of soteriology rather than merely offering a secondary apologetic.

Moo’s thesis is a solid piece of work with sufficient Hebrew and Greek in it to scare off the beginner. In its discussion of the texts it will function as an indispensable reference book, faithfully summarizing and evaluating the contributions of other scholars and coming to sound, well-balanced conclusions. Its merit lies in its thoroughness and sanity rather than in any novelty, but the structuring of the discussion in terms of the type, of appropriation of the Old Testament material is certainly distinctive and introduces a most helpful element into the debate. This is a first-class example of evangelical scholarship and will be essential reading for the mature student.

The date of Deuteronomy: linch-pin of Old Testament criticism

In the Beginning: The opening chapters of Genesis

Jesus and the World of Judaism

Jesus and the Politics of his Day

Prophecy in Early Christianity and the Ancient Mediterranean World

Biblical Interpretation and the Church: Text and Context

Reviewed by W. A. Strange
Religious Studies
VIEW ALL VIEW ALL