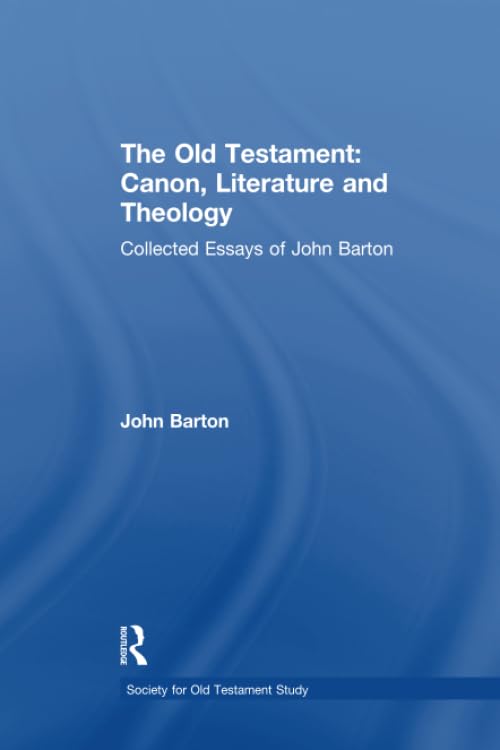 This book conveniently gathers together a related series of articles that appeared in the last twenty years in journals and multi-authored books. A similar collection of the author’s articles on biblical ethics has also been published. He is Oriel and Laing Professor of the Interpretation of Holy Scripture at Oxford University and is perhaps best known for his book Reading the OT: Method in Biblical Study (1984, 1996). Much of his first two sections in this collection naturally coincides with his conclusions drawn there, but they are discussed here at greater length and from various angles. Here and elsewhere Barton exemplifies the image of British scholarship as coolly and judiciously evaluating the hot, new notions of others, though this is not to minimize his own innovative work. This quality of engaging in what Mathew Henry called “second and sober thoughts” makes his writing essential reading, although and in fact because he often stands in a center-left position rather than in the center-right one of many readers of this journal.

Of the twenty-four essays, the largest number, eleven, is devoted to literature. This preponderance accords with the fact that he received a literary training before a theological one. Those of us who are less lettered and yet try to handle literature-based approaches must appreciate his expertise and listen carefully to his recurring warnings that neither Robert Alter nor Brevard Childs is to be followed uncritically. The essay “What Is a Book?” concludes with a plea for tolerating loose ends and not striving to impose on the text a tidiness that can emanate from a literary approach. The next essay closes with a warning that “the Church is not best served by an academic community that delivers the verdicts it wants to hear” (p. 156). Chapter thirteen was the inaugural lecture of his professorial chair. It makes the ever timely point that “the question [biblical criticism] asks is always ‘What does the text say?’ rather than ‘What have we always been told that the text says?’ or ‘What would it be good to believe that the text says?’ ” (p. 162). The next essay, on “Wellhausen’s Prolegomena,” which depends solidly on the earlier articles in the journal Semeia 25, is a good example of advancing scholarship by first standing on others’ shoulders. In “The Final Form of the Text,” Barton poses some gadfly questions. The final essay in this section, “On Biblical Commentaries,” engages in perennial concerns and urges an approach of “chastened historical criticism” (p. 210).

Seven essays are concerned with the issue of canon. Much of what he says is a persistent evaluation of Childs’s “canonical approach,” which he opposes in a sympathetic manner, arguing for instance that the emphasis on product should be balanced by James Sanders’s stress on process. The essay on the Book of the Twelve gives an example of what he urges generally in “What Is a Book?”—not to impose uniformity on the text but to respect its variety and diversity. A number of the essays in this section reiterate this warning as part of a plea to retain a historical-critical approach in order to elucidate scripture properly. One misses a recognition at some point that Childs was no stranger to biblical tension and often brought it to the fore in his Old Testament Theology in a Canonical Context. In “Old Testament or Hebrew Bible?” he argues forcefully in favor of the former title over against the latter one or even First Testament.

The remaining six essays relate to theology. Chapter nineteen is a careful evaluation of von Rad’s theological interpretation of OT literature and in this case finds an improper diversity. “History and Rhetoric in the Prophets” appreciates the role of rhetoric in the prophetic interpretation of history, but one is left wondering whether Barton’s balance is right. “The Messiah in OT Theology” includes a thoughtful discussion of what OT theology is or should be as well as a consideration of the role of the Messiah in it. “Covenant in OT Theology” tackles the different attitudes to covenant encountered in biblical studies and tries to draw some conclusions. In his final essay, “The Day of the Lord in the Minor Prophets,” he argues well that the doctrine reverted after Amos to a pre-Amos definition, but one wonders whether he has appreciated the essential difference between a pre-judgment perspective and a post-judgment one.